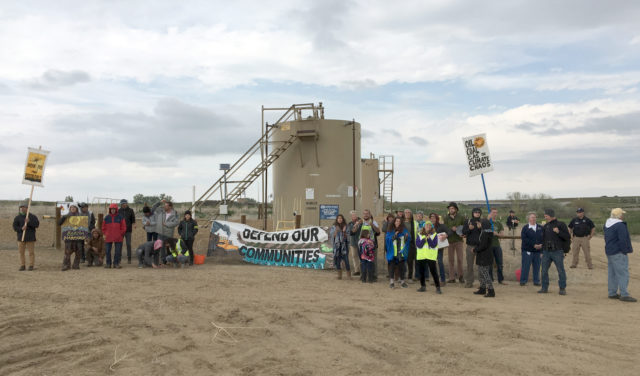 On May 2, the Colorado Supreme Court ruled that Longmont’s fracking ban and Fort Collins’ fracking moratorium were in conflict with state regulations and therefore invalid. It wasn’t because communities have no right to apply their own land-use and zoning ordinances to oil and gas extraction within city limits, the court upheld that right. The high court’s ruling was based on it’s claim that the “state’s goals,” when it comes to oil and gas, are to maximize production and prevent wasting any oil and gas by leaving it in the ground, and that communities can only use their own regulations if they support that goal.

While the Court’s ruling is in direct conflict with modern climate science and the desires of millions of Colorado citizens, it is, for now, the law of the land and will likely result in the end of all fracking bans and moratoriums throughout the state in the near future including those in Boulder, Boulder County and Broomfield.

So just what recourse has been left for those who oppose the industrial process of oil and gas extraction within their neighborhoods now that the court has ruled out local democracy as a solution? As a number of observers and activists have noted, there are only a couple of options remaining: amend the state constitution and civil disobedience.

There are three citizen’s initiatives that would amend the state constitution in a manner that would create more local control over energy extraction — two impacting community rights and one creating a 2,500-foot setback of oil and gas facilities from homes and schools. All three are currently gathering signatures in order to place them on the November ballot. But even this last ditch democratic process left to voters is being challenged by the oil and gas industry and its political operatives and controlled politicians.

Oil and gas industry backers have launched their own initiatives. One called “Raise the Bar” which would make it nearly impossible for Colorado citizens to ever use direct democracy to amend the constitution in the future. The campaign for this pro-oil Trojan horse is being run by the same folks BW investigated in its “Behind the Curtain” report that ran September 17, 2015.

EIS Solution’s Josh Penry and his old pal Joe Megyesy are handling the campaign. BW readers will recall Penry as the oil and gas consultant who specializes in creating fake or “Astroturf” grassroots citizen groups that appear to support more drilling for oil and gas and less regulation on the industry. He works with big oil through both Citizens for Responsible Energy Development (CRED) and Vital for Colorado.

Megyesy, was a spokesperson for Penry during his political career. As of 2015, he is a program officer with the Gill Foundation who has ties to both Colorado Concern board member Tim Gill, one of the original four billionaires who took control of Colorado’s Democratic Party in 2002 in what is now known as the Blueprint, as well as Strohm’s Starboard Group.

The Raise the Bar initiative was supposedly born out of the public meetings being held by a group calling itself Building a Better Colorado, an organization said to be the brainchild of Dan Richie, another board member of Colorado Concern.

A close examination exposes the Raise the Bar initiative as just another effort that will prop up the oil and gas industry while further stripping the rights of Colorado citizens in order to insure the industry’s ability to continue to drill at will with ineffective state oversight. And of course, Governor Hickenlooper supports the effort along with his Republican allies.

In short, 2016 may be the last realistic chance for citizens to amend their state’s constitution, a process that gave us both legalized marijuana and TABOR. In other words, if Raise the Bar passes, both conservatives and progressives will lose their ability to have a say in Colorado’s political system which is increasingly controlled by only a handful of wealthy individuals and the oil industry.

Which brings us to the other remaining option left for those who want to protect their family’s health, their property values and their communities — namely, civil disobedience.

With the Supreme Court having removed all legal means for communities to stop drilling, and with the fight over global warming having reached a critical tipping point according to the world’s scientists, it’s a foregone conclusion that those opposed to continued unbridled oil and gas extraction would turn to civil disobedience as the next step in their struggle.

Last week, there were two separate actions in Colorado that confirmed this evolution in the movement: one at a Bureau of Land Management (BLM) oil and gas lease auction at a Holiday Inn in Lakewood; the other at the proposed site of one of the state’s largest drilling and production operations to date, which is located near Silver Creek Elementary School in Thornton.

The BLM protest on May 12 received a small amount of press coverage. The all-day protest in Thornton on May 14, which included an unpermitted makeshift anti-fracking festival on open space with speakers ranging from author and 350.org co-founder Bill McKibben to rapper Jonny 5 of the Flobots and Rep. Joe Salazar (D-Thornton), did not receive any news coverage. This despite the protest culminating in the takeover of the well site after the warnings of 15 police officers dispatched to the location.

Apparently, there were just too many oil-and-gas-are-good-for-you commercials on TV that day for local stations to squeeze in coverage of one of the state’s biggest news stories. The Post and the state’s other chain-owned newspapers were also apparently too busy to send a reporter.

This underreporting is why Boulder Weekly felt compelled to provide our readers with a photo essay of these two important events. We believe they mark a turning point in the battle over oil and gas extraction in the state of Colorado. Civil disobedience now appears to be at the core of the anti-fracking movement, and with the recent Supreme Court ruling, we believe it will likely remain there well into the future.

We sincerely hope that the news media that is currently gorging itself on oil and gas ad dollars will soon return to reporting on these escalating tensions.