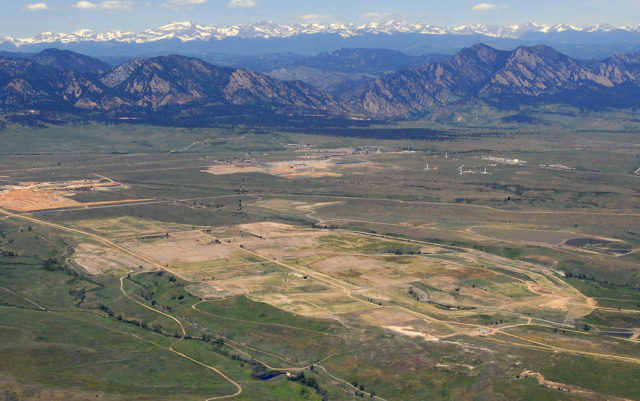 If the U.S. Department of Justice (DOJ) has its way, the director of Jefferson County Public Health, a nuclear forensics researcher, an emeritus professor of biology, a meteorologist and a toxicology expert will be barred from testifying at a July 17 hearing in the U.S. District Court in Denver over the future of Rocky Flats National Wildlife Refuge — 5,237 acres of grasslands surrounding the former nuclear weapons facility and Superfund site 10 miles south of Boulder.

At Tuesday’s hearing, a federal judge will decide whether or not to grant a preliminary injunction to a coalition of local environmental groups — Rocky Mountain Peace & Justice Center, Candelas Glows/Rocky Flats Glows, Rocky Flats Right to Know, Rocky Flats Neighborhood Association, and Environmental Information Network — seeking to block construction of 20 miles of recreation trails and a multi-million dollar visitor center inside the Refuge, due to concerns with plutonium contamination.

Federal attorneys representing the defendants — who include Acting Director of U.S. Fish and Wildlife Service (USFWS) Greg Sheehan, Rocky Flats National Wildlife Refuge Manager David Lucas and Secretary of the Interior Ryan Zinke — allege that the testimony of the plaintiffs’ scientists goes beyond the scope of this particular hearing and are “improper ‘expert witnesses.’”

“Our witnesses will provide evidence addressing ‘irreparable harm’ and the other legal standards to block opening the Refuge to the public,” he counters. “They need to testify so that the judge gains a full understanding of the potential harm to the public.”

Plaintiffs hope to prevent USFWS from breaking ground as early as this summer while the Court mulls over the former’s legal complaint filed in May alleging that the federal agency (along with U.S. Department of Transportation) violated the National Environmental Policy Act (NEPA) in moving forward with the proposal.

If the plaintiffs prove their case, USFWS would have to go back to the drawing board, drafting a detailed Environmental Impact Statement and opening the planning process to public comment.

From 1952-1989, Rocky Flats manufactured an estimated 70,000 plutonium “triggers” for nearly all U.S. nuclear weapons. The facility shut down following a raid from the Federal Bureau of Investigation (FBI) and Environmental Protection Agency (EPA) for environmental crimes, and underwent a 10-year, $7 billion cleanup, ending in 2006.

During the facility’s operation, plutonium and other radioactive and non-radioactive toxics seeped into the soil and migrated onto Refuge lands via high winds, erosion, surface water runoff and possibly even routine operations.

While USFWS, EPA and Colorado Department of Public Health and Environment (CDPHE) officials acknowledge plutonium contamination on Refuge lands, they assert that the levels are so low as to be safe for “unlimited use and unrestricted exposure,” with visitors having less than a one-in-a-million risk of getting cancer.

However, in a written declaration submitted to the Court on May 31, Dr. Mark Johnson, director of Jefferson County Public Health, questioned the expertise of CDPHE officials who insist the Refuge is safe, warned it would be “unwise” to let people onto the property, and pushed for an independent evaluation of soil plutonium levels.

Another witness, Dr. Harvey Nichols, emeritus professor in the University of Colorado biology department, has studied Rocky Flats for more than four decades. In his declaration he wrote that his “work has shown that the Refuge plus the industrial zone was contaminated by four decades of plutonium dust release on a routine daily basis.” In the 1970s, he found the highest level of plutonium contamination near one of the proposed trailheads.

A third witness, Dr. W. Gale Biggs, a micrometeorologist specializing in air pollution and air quality, wrote in his statement that “plutonium dust remains in and on the Refuge’s soil surface and in and on the Refuge’s vegetation” and that recreation can kick up particles into the air, which can be inhaled or migrate downwind for miles, “pos[ing] a substantial human health risk.”

A 2012 lab report by yet another witness, Dr. Marco Kaltofen, civil engineer and the principal at Boston Chemical Data Corp, found plutonium on the Refuge lands and even locations outside its boundaries.

The defendants’ motion also seeks to limit some of the above individuals’ testimony, either citing inapplicability to the hearing or that they had not disclosed the nature of their testimony in advance, which may cause DOJ lawyers to be “unfairly surprised.”

In comparison to the plaintiffs’ many witnesses, the defendants plan to call only one to the stand, Refuge Manager David Lucas.

When asked about the chances of the court ruling in favor of the DOJ in terms of barring the plaintiffs’ witnesses, Weiner says, “I think we have a strong case, and the judge is giving us our opportunity to educate him on the issues.”

He’s also prepared for the worst case scenario, saying, “Regardless of what the judge rules on at the hearing, the case will continue, and so the judge will have the opportunity to rule in our favor and close the Refuge at some point in the future.”

No matter who ends up testifying on July 17 at 12 p.m., Rocky Flats opponents will hold a demonstration against the public opening of the Refuge in front of the Courthouse at 19th and Champa in Denver.

In a related development on Tuesday, July 10, the Town of Superior filed a separate lawsuit in U.S. District Court against USFWS, similarly alleging the agency didn’t comply with NEPA when moving forward with plans to open the Refuge.