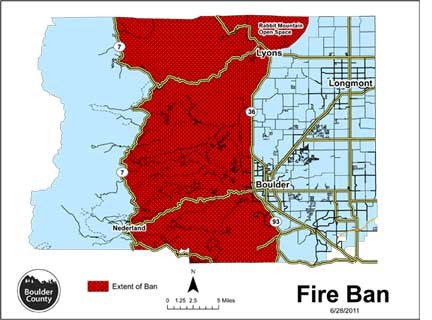 In response to the increasingly dry summer conditions and
recent wildfires in the area, Boulder County Sheriff Joe Pelle has announced he
will put a fire ban in place for selected parts of the county.

The ban prohibits open burning and the discharge of any fireworks
in certain mountains areas of the county, specifically the areas west of the
North and South Foothills Highways and the areas east of the Peak to Peak
highway, according to a Boulder County Sheriff’s Office press release.

With the holiday weekend approaching and the expected
increase of visitors to forest campgrounds, the ban will allow for gas fuel
stoves and fires only in improved and maintained campgrounds.

For a complete list of campgrounds affected by the ban,
visit http://bit.ly/iPYasN.

Cmdr. Rick Brough of the Boulder County Sheriff’s Office
says the fire ban will not affect firework displays put on by the city of
Boulder over the holiday weekend, but no fireworks of any kind will be allowed
in the area subject to the ban.

“It’s just going to be west of Highway 36 and east of Peak
to Peak,” Brough says. “But absolutely no fireworks of any type up in the
mountains because, they may be legal fireworks, but because we’re under fire
ban, all will be illegal in those areas.”

The ban will go into effect at noon on Thursday, June 30,
and continue until the hazardous fire conditions subside, according to the news
release. Anyone found in violation of the ban may be convicted of a class 2 petty
offense and subject to a $500 fine.

‘The mystery of buster’