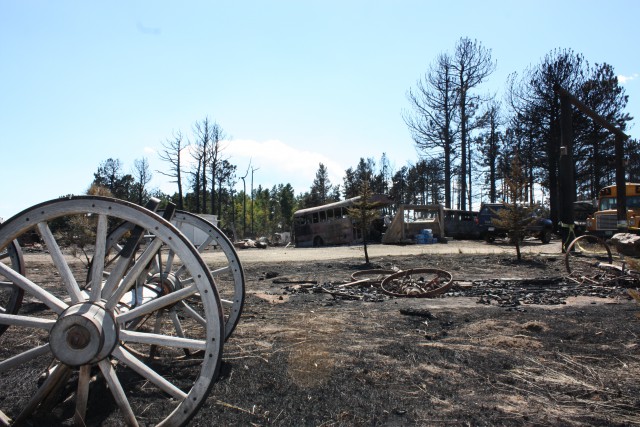 With spring weather bringing rain, sunshine and even snow, efforts are under way to prevent any more damage to the environment and the residents of the area affected by the Fourmile fire last September.

According to a news release from Boulder County, this week the Boulder County Fire Rehabilitation Implementation Team started performing aerial mulching and hand seeding in the area to control erosion and weeds.

About 1,960 acres are being aerially mulched with certified weed-free straw. The mulching is scheduled began April 7 in the Sugarloaf Road and Fourmile Canyon Drive areas, and is expected to begin on April 12 in Sunshine Canyon.

“Basically, we will be putting straw mulch down on burned areas using helicopters, and that’s been shown to be extremely effective in other parts of the country,” said Boulder County Wildfire Mitigation Coordinator Eric Philips. “It really helps to reduce erosion, limit weed infestations, and reestablish some vegetation cover.”

Other hazards following the fire were evaluated by the Fourmile Emergency Stabilization Team (FEST), which was created to assess threats to human life and safety, property and critical natural or cultural resources in burned areas, according to reports from the Colorado State Forest Service’s Boulder District.

The FEST report states that in total, the blaze consumed 169 homes and destroyed $217 million in personal property. However, the area is now highly susceptible to other dangers that can come post-fire.

“The steep topography and mobile soils of the area make floods and debris flows very probable,” says the FEST report. Noxious weeds are also expected to become rampant on the burned lands, as has happened in a number of nearby areas that also experienced wildfires.

According to Ryan Ludlow, education and outreach coordinator for the Boulder County Forest Health Initiative, the burn severity of the Fourmile fire varied greatly in different areas.

Many dry, southern-facing slopes saw intense fire and were left with areas that had almost no surviving trees, while northern slopes, which tend to be wetter and more densely populated with trees, retained more of their vegetation, he says. In the areas that burned with lower fire intensity and were not completely consumed, natural resource experts view the fire as an efficient ecological process for clearing out old vegetation and allowing new trees to grow.

“Historically, ponderosa pines and the other trees in this area would have had fairly frequent fires, maybe every 30 to 60 years,” says Ludlow. “But basically, we now have a forest that is extremely overcrowded, so when we get fires today, they are much more intense and damaging than fires that would have come through in the past.”

Because of the high burn intensity of the Fourmile Fire, many trees that would have survived a natural fire in the past are dead, without a chance to regenerate, according to Ludlow.

“On the other hand,” he says, “ponderosa pine are a very fire-adapted species, and the ones which did not end up as just blackened sticks will be able to restore themselves naturally.

The trees that did end up as blackened sticks, generally referred to as “hazard trees,” are also a concern for the Forest Service, as they will eventually fall over without warning, according to Philips.

“They’re not as much of a problem in areas without people and infrastructure,” says Phillips. “But when they’re near roads and trails, we actually have to go through and fell some of those trees.”

Because such trees would fall on their own after wind events or heavy rain, felling them does not produce a huge amount of negative environmental impact, Philips says.

Ludlow adds that the other natural vegetation in the area, including native grasses, flowers and shrubs, is expected to return on its own within the next couple of years.

A number of students at the University of Colorado at Boulder expressed their appreciation for the Forest Service’s efforts in the area that lies so close to their campus.

“I think it’s great that the Forest Service is looking out for the environment as much as it looks out for people who live up there,” says CU student Vicky Grunberg. “We’re really lucky to live in a place with such beautiful natural surroundings, and I would hate for that all to just get destroyed in one fire.”

“We’re doing everything that we can, and looking at the most recent research to try to avoid counteracting the natural establishment of native vegetation,” says Ludlow. “We really want to mitigate any negative effects that our efforts might have.”