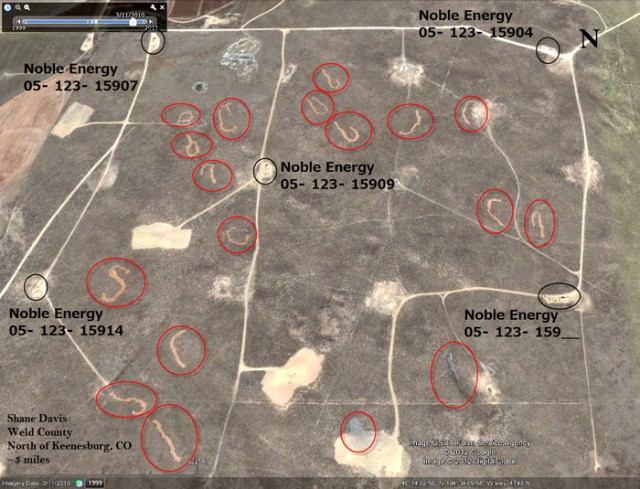 They kind of look like alien-made crop circles, but the jury is still out on whether mysterious linear shapes in Weld County are the work of frackers or ranchers feeding their cattle.

Colorado activists have raised concerns about satellite imagery of what appears to be scarred earth caused by the dumping of oil/gas drilling waste, but state officials maintain that most of the strange patterns are simply areas where livestock feed was deposited.

In an accompanying letter, Davis and Wockner wrote that the images seem to support rumors that have been circulating about the illegal disposal of drilling and hydraulic fracturing (fracking) fluids and other wastes.

“These images appear to support the rumored allegations and may suggest that drillers and frackers may have been driving tanker trucks off-road, opening the valve on the tanks while driving, and spraying drilling and fracking fluids and wastes across the landscape,” they wrote. “The images suggest that the chemicals sprayed out may have killed the vegetation on the landscape — green areas are turned orange/brown or completely white. Two-track wheel tracks can be seen trailing some of the alleged possible dumping sites.”

Davis and Wockner asked Hickenlooper to direct state officials to investigate, which they did over the following 11 weeks. Davis says the state requested two extensions due to the difficulty of the research involved.

In a May 22 letter, Thomas Kerr, acting director of the Colorado Oil and Gas Conservation Commission (COGCC), dismissed the claims.

According to Kerr’s letter, COGCC staff examined aerial photos and conducted on-site inspections at a “subset” of the locations in question on May 5 and May 10. The state’s investigation appears to focus solely on the Guttersen Ranch, where Kerr said “many” of the wells identified by Davis and Wockner are located.

The Guttersen Ranch is an active cattle ranch that also has numerous oil and gas wells, and the fenced property is strictly monitored to prevent dumping and trash disposal, Kerr wrote. He attributed the strange land scars to two things: the permissible spread of drilling mud and the feeding of cattle.

Kerr acknowledged that “in a few cases, fresh water-based bentonitic drilling mud was land applied to well sites as a beneficial soil amendment,” which is allowed under COGCC rules. Bentonitic mud, which is produced as the drill bores through the earth and sends rock “cuttings” material up the well shaft, “have effectively been used to stabilize areas of blow sand throughout Northeastern Colorado,” Kerr wrote, and “areas where it was applied have been re-seeded and re-vegetation is occurring. The land application of this material only occurs with the consent of the landowner.”

He noted that other byproducts such as oily wastes and fracking “flow-back” fluids “cannot be land applied and require proper handling and disposal” according to state and federal rules.

Kerr said that interviews with one of the landowners indicate that the linear features identified by Davis and Wockner “were likely temporary livestock feeding areas with the ‘orange/brown’ features depicted in the photo likely comprising hay or other livestock feed for 1,000 head of cattle.”

He concluded that “we have not been able to corroborate the allegations. No evidence of illegal dump ing of drilling fluids, drill cuttings, fluids or other wastes was identified.”

But Davis still has his doubts. He notes that the COGCC did not address the aerial photo that features what appears to be gray, delta-shaped flow areas. And since most of the wells in question are operated by Noble Energy, he questions whether the outcome of the state’s investigation was affected by the fact that it was released just as Hickenlooper was joining Noble officials to announce the opening of the company’s new operations center in Greeley and its plans to invest $8 billion in the area over the next five years.

Davis dismisses the idea that the drilling mud is beneficial to croplands, given that it contains radioactive isotopes. He also disputes the notion that the land scars were simply areas where cattle were being fed, and he says he plans to collect soil samples on public lands where the patterns have been made.

A Boulder Weekly examination of satellite images and aerial photos taken of the Guttersen Ranch over time failed to uncover other examples of the patterns found by Davis and Wockner, even though the outline of the shapes that the pair discovered in photos taken in 2006 have remained for years and are still visible today.

The lack of similar lines in other areas of the property during other periods raises several questions. Was that the only time the ranchers fed their cattle in that manner? Why are the lines only found emanating from oil/gas wells? Why aren’t there similar scar patterns elsewhere on the ranch and in other years, assuming the ranch has fed its cattle at other times and locations?

When reached by phone, Guttersen Ranch co-owner Art Guttersen declined to answer questions about their cattle-feeding patterns or processes.

“I’d rather not say anything, just because we don’t want to draw any more publicity to our name or our ranch,” he said. “I thought it was a closed case. If you’re going to do a story on it, it’s just going to open the whole thing back up.”

When advised of Davis’ continuing doubts about the explanation offered for the strange lines, Guttersen said, “I don’t give a shit about the guy, to be honest with you.”

The 12 site reports of the inspections contain virtually identical narratives written by COGCC inspector Jim Precup. Precup writes that he found no cuttings, and that he called Guttersen about the claims. “[Guttersen] said that he had also received a letter from the Sierra Club and was highly offended by the letter. He said I could check all I wanted and that he was willing to open the property to anyone to check for cuttings. He said they would find none. He told me that he had over a thousand head of cattle and what the satellite views represented were feeding stations, nothing more.

“I also called Mr. Ryan Litfin from Noble and asked him if he knew of any drill cuttings being placed on the Guttersen property? He said why would anyone think that they would place cuttings right next to their wells? He also said Noble had their own sights [sic] to dispose of drill cuttings.”

When reached by phone, Precup referred questions to Kerr. When asked about the cattle-feeding explanation — and why the patterns don’t appear in other ranch locations and time periods — Kerr told BW, “because the cattle might not be there at other times, and he might not be feeding them. It’s just a periodic thing. They don’t always hay their cattle, only in certain times when they need to have additional feed that the land’s not providing. And I’m not a rancher, I’m not an expert on it.”

He added that it’s “a matter of circumstance where aerial photos managed to capture it, and then the cows eat it up, so then it disappears. It’s a time-sensitive thing.”

Kerr acknowledged that his staff did not address the fact that the scars lasted for years and seemed to be an isolated case. But he says his staff did take a few soil samples “where the site looked like there was something that was questionable,” and those samples turned up nothing untoward.

Kerr clarified that any bentonitic mud would have been spread on and around the well pad, which is allowed, but it wouldn’t have been dumped in lines. Drill mud that is used for cropland is tilled into the soil with the permission of the landowner and under a permit obtained by the oil/gas operator, he explained, so the patterns identified by Davis and Wockner are being attributed solely to cattle feedings.

When asked about the image showing gray, delta-like flows that Davis says was left out of the investigation, Kerr looked at the photo and acknowledged, “I see the gray spots coming off the pads, and the one that’s circled, it looks like it’s actually running off the pad. I’d have to ask [staff ] what they found on those specific locations.”

When asked whether any of the areas identified by Davis and Wockner were not located on the Guttersen Ranch, Kerr said he didn’t know. Similarly, he couldn’t say why the purported cattle-feeding lines only appear next to oil/gas wells.

“It was difficult for us to figure out what actually happened until we talked to Mr. Guttersen about it,” Kerr said. “It was the best thing we could find, and it took us a while to try to figure out exactly what it was.”

He claims that Davis and Wockner are barking up the wrong tree.

“I understand Mr. Davis and Mr. Wockner’s concerns, I think they have great concerns and it’s good, but I just think they’re trying desperately to find something to use, and I’m just not sure that this is exactly the smoking gun they’re looking for.”

He acknowledged that the COGCC does periodically hear rumors of trucks illegally dumping wastewater, but it’s usually described as being done on streets.

And it would be foolish to dump illegally on a piece of property where you have hundreds of wells, he adds.

“The last thing you want to do is get caught doing something like that, because the surface owner is going to take action against you,” Kerr said.

Tisha Schuller, president and chief executive officer of the Colorado Oil and Gas Association, showed one of the aerial photos in question at a June 12 Loveland City Council meeting and explained the scars away as the application of beneficial drill cuttings and mud on cropland.

“One of the things companies do is they can use drill cuttings for agricultural purposes,” she told the council.

When Boulder Weekly asked Schuller for further comment, Doug Flanders, COGA director of policy and external affairs, sent the following to BW via email: “While COGA has not seen nor been privy to the follow-up correspondence between the COGCC and the Sierra Club, our understanding is that the Sierra Club’s accusation was unfounded and unrelated to any oil and gas operations.”