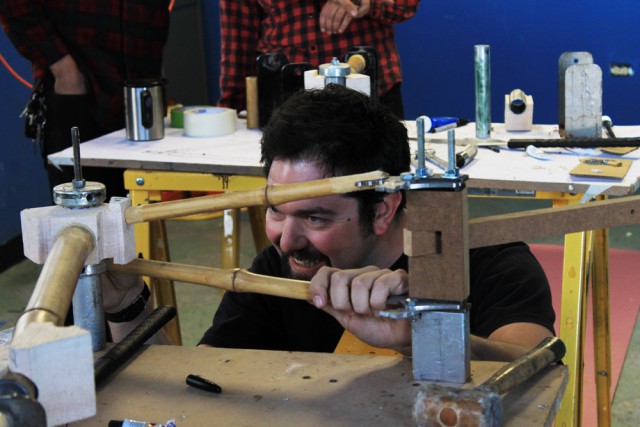 There are potential bike frames growing alongside the New Jersey Turnpike.

No, that’s not some Salvador Dali-inspired hipster painting; it’s the truth, in a matter of speaking — you just need to know how to build a bike out of bamboo.

On Nov. 17, Boulder will get its chance to learn.

Fence Heanue and Merrily Grashin are the traveling faces of Bamboo Bike Studio, which builds bamboo bicycles in New York, San Francisco, and even Africa. But don’t buy a plane ticket just yet.

Heanue and Grashin are traveling the country in a modified U-Haul, teaching bamboo-bike building workshops, and will be leading a workshop with Satellite skate shop from Nov. 17 to Nov. 20. The two have been on the road since mid-September.

“We’ve done a funny little zig-zag,” says Heanue, who has been working with Bamboo Bike Studio for about a year and a half. “We started in Brooklyn, then went down to Florida, over to Alabama, and then up to Minneapolis.”

Bamboo Bike Studio began out of doing research and development for a bike factory in Kumasi, Ghana, through a partnership between the UN’s Millennium Cities Initiative and Columbia University’s Earth Institute. The factory opened in January 2011. Unlike many of the bikes being built in New York, California, and the workshop tour, only one model is built in Kumasi, a simple design with coaster brakes (think when you learned to ride a bike, and the way to stop was peddling backwards).

The frames built in the workshops, however, are customizable.

When finished, the bamboo frames are just as strong as traditional steel bike frames. They don’t rot, because bamboo is naturally waterproof, and they are light weight.

Colorado on Nov. 1. They held a short workshop in Boulder on Nov. 4, which was attended by Dan Coppola, who built a frame in Bamboo Bike’s New York shop the year before.

He was attending the Nov. 4 workshop to build himself a cyclo-cross road bike, which are a bit more durable and normally used for touring.

“The first one I built was for my girlfriend,” says Coppola, who is the event coordinator for Adventure Fit, a local sports marketing company.

For each city, Heanue and Grashin order the bamboo, which will be delivered by Fed Ex, based on the number of people attending the workshop. Using files, drills and elbow grease, the frames are assembled — with instruction, of course, and by the end of the workshop, should be ready for the bike’s components: brakes, seat post, crank, etc.

But so far, according to Heanue, things have been a bit slow.

“We’re having trouble getting the word out,” he says.

There hasn’t been a lot of consistency with attendance or even the venues they build at in each city. Sometimes they are outside, using the awning of their modified U-Haul — which Heanue and Grashin have turned into a veritable steam-punk masterpiece of pulleys and trap doors — as a makeshift shelter from the elements.

The Nov. 17 workshop is being hosted by Satellite skate shop, but Heanue and Grashin weren’t sure where the final venue would be.

To sign up for the workshop, go to the group’s website, bamboobikestudio. com, and click on “bikes to build.” Select the bamboo frame, and on the bottom of the page, you’ll see form fields asking where you want to build the frame. Select “tour.”