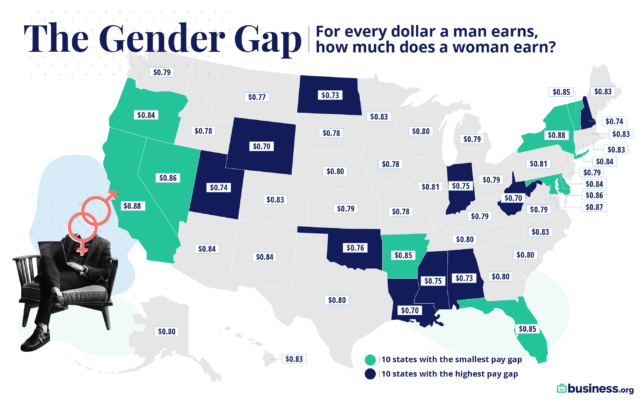 March is Women’s History Month, a celebration of female contribution to American history and our contemporary society. It coincides with International Women’s Day, March 8, which recognizes not only the achievements of women, but also draws attention to persistent inequality throughout the world. Although the U.S. passed the Equal Pay Act in 1963, female earnings have remained consistently lower than their male counterparts throughout the country, including in Colorado.

The Centennial State ranks 20th in the nation for smallest pay gap between men and women, according to a recent report from business.org, a Salt Lake City-based organization focused on helping the small business market nationwide. It used data from the 2018 American Community Survey to determine its rankings. Nationally, female workers over the age of 16 make 80.1% of the median earnings of men of the same demographic. Louisiana has the largest pay gap: women there make $0.70 to every man’s $1.

In Colorado, the gender pay gap has improved 3.6% since 2010, and on average, women in Colorado earn $0.83 for every $1 men make. In Boulder, women earn $0.75 to every man’s dollar, making Boulder’s gender pay gap greater than every other reported Colorado metro area, including much more conservative places of the state like Colorado Springs (77.8%) and Greeley (80.4%).

Pueblo, where on average women make $0.96 cents to every $1 men in the city make, ranks in the top 10 of metro areas across the country.

The analysis also found that pay discrimination hits female entrepreneurs the hardest and the pay gap actually widens for women with advanced degrees. Nationally, women who have a bachelor’s degree earn 68.45% compared to men with the same degree and only 67.6% if they have a professional degree compared to men.

The federal government and regulators are pushing forward on approving oil and gas permits in Colorado and rolling back environmental protections nationwide, despite widespread government shutdowns and stay-at-home orders.

The Center for Western Priorities (CWP) recently found that the U.S. Department of the Interior is pushing forward on 76 policies that weaken protections to wildlife and expand fossil fuel extraction on public lands.

Currently, seven proposed and final rules are being reviewed by the White House Office of Management and Budget, including regulations that weaken air quality restrictions for offshore drilling, reopen tax loopholes for oil, gas and coal companies, weaken the Environmental Protection Act and more, according to CWP.

“Instead of allowing Americans to focus on their health and well-being, the Trump administration is moving forward with destructive proposals to expand drilling and mining and reduce protections for wildlife,” said CWP Policies Director Jesse Prentice-Dunn in a statement.

Concurrently, the Colorado Oil and Gas Conservation Commission (COGCC) confirmed to Boulder Weekly that it is still reviewing and approving permits and that the number of applications has not fluctuated amid coronavirus-related shutdowns. The COGCC announced on March 25, however, that it would pause rulemaking related to SB 181.

Boulder County canceled all upcoming meetings to review its proposed oil and gas regulations due to COVID-19. “Updates to the schedule will be announced as soon as a safe and robust public process is possible,” the County said in a press release.

Boulder County trails and open space were packed this past weekend, and will likely be in the near future on any day that’s reasonably nice. But with more people recreating, there is a potential for more injuries and more calls to the Sheriff’s Office and Rocky Mountain Rescue.

“The biggest issue we encountered over the weekend was the number of people recreating in the mountains,” says Mike Wagner, division chief at the Boulder County Sheriff’s Office. “Trailheads, it was across the board, County-wide… parks. It was crowded because people have been quarantined. … We appreciate people are out exercising, but it does create other [issues] in the system.”

Like the potential for increased interactions between law enforcement, rescue workers and people exercising, and subsequent trips to area emergency rooms. Drew Hildner, a team leader at Rocky Mountain Rescue, says the group got four rescue calls this weekend, “a little bit unusual for this time of year, but not enough to be remarkable.”

Individual injuries and calls may be limited now, but they can add up and jam the system quickly at a time like this, Wagner says.

“People get injured. Injured people can end up in the hospital,” he says. “That has a direct impact to the hospital system and emergency department. Hospitals are already stretched thin, and it’s just adding additional complexity to the challenge.”

The answer is not to stop exercising or getting out in nature, to be sure. But, Hildner says, maybe use some common sense when you’re out on the trail.

“Now is not the time to push your limits, or to try things that are at your technical limits or trying to get new, fastest times on some trial or something like that,” he says. “We’re just kind of asking people to slow down, take it easier and maybe do more planning and preparation.”