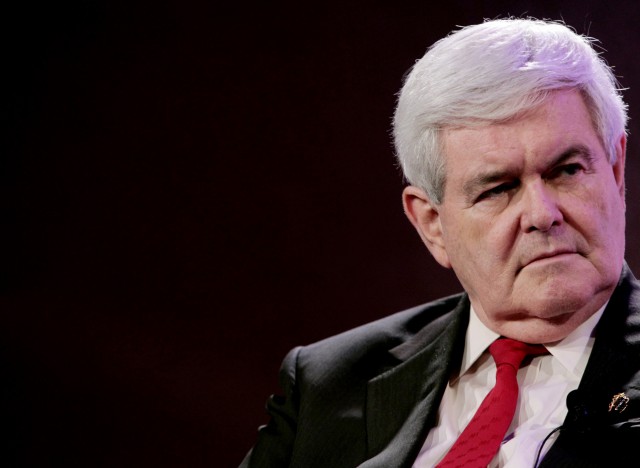 NORTH CHARLESTON, S.C. — With a narrowing window to
stop front-runner Mitt Romney before South Carolinians cast their
ballots Saturday, Newt Gingrich stole the spotlight within the first
moments of Thursday’s night’s debate — turning a question about
allegations by his second wife into a scorching attack on the media.

The four remaining candidates in the GOP presidential
race met for their 17th debate just hours after ABC aired excerpts of
an interview with the former House speaker’s ex-wife Marianne Gingrich,
who alleged that he had sought an “open marriage” while carrying on an
affair with a congressional staffer, who later become his third wife.

CNN moderator John King opened the debate by asking
Gingrich if he wanted to respond. “No, but I will,” a stone-faced
Gingrich answered, drawing loud applause from the audience. “I am
appalled that you would begin a presidential debate on a topic like
that.

“Every person in here knows personal pain,” Gingrich
continued. “Every person in here has had someone close to them go
through personal things. To take an ex-wife, and make it two days before
a primary a significant question in a presidential campaign is as close
to despicable as anything I can imagine.”

The former House speaker added that he was “astounded
that CNN would take trash like that” and use it to open a presidential
debate.

Addressing his ex-wife’s allegations directly for the
first time, Gingrich said the story “is false,” and that he was “tired
of the elite media protecting Barack Obama by attacking Republicans.”

For a moment that tense exchange between Gingrich and
King seemed to breed camaraderie among the four remaining Republican
contenders — who have been battling fiercely over the past week in South
Carolina. But their matchup at the North Charleston Coliseum and
Performing Arts Center came as the race is tightening, with polls
showing Gingrich narrowing Romney’s lead.

As in other debates, Romney’s experience heading the
private equity firm Bain Capital quickly became a target, as did the
question of whether and when he would release his tax returns.

Gingrich and former Pennsylvania Sen. Rick Santorum,
former congressional colleagues and allies in the GOP’s 1994 takeover of
the House, engaged in one of the sharpest exchanges of the evening,
clashing over the check-kiting scandal that helped drive Democrats from
power.

Santorum said Gingrich knew of the improprieties as
part of the Republican leadership but “didn’t have the courage” to blow
the whistle and “risk your political career, risk your promotion within
the ranks and do what was right for America.”

Gingrich responded acerbically that he had been a
rebel “long before Rick came to Congress,” helping drive a Democratic
speaker from power and challenging the president of his own party,
George H.W. Bush, when he broke his read-my-lips promise and raised
taxes. “Those are just historic facts,” Gingrich said, “even if they’re
inconvenient for Rick’s campaign.”

Looking on, Romney chimed in that the back-and-forth
offered “a perfect example of why we need to send to Washington someone
who has not lived in Washington, but someone who has lived in the real
streets of America, working in the private sector.”

When the conversation shifted to Romney’s work at
Bain, the former Massachusetts governor repeated his defense that while
he expected to be attacked by President Barack Obama, he found it “kind
of strange” on a stage with Republicans that he was having to describe
“how private equity and venture capital work.”

“There’s nothing wrong with profit,” he said to
applause. “That profit — that profit went to pension funds, to
charities; it went to a wide array of institutions. A lot of people
benefited from that.”

He said he knew Obama would hit him hard on that
issue, “but we’re going to stuff it down his throat and point out it is
capitalism and freedom that makes America strong,” he said to applause.

The candidates also tangled over tax returns after an
audience member asked the contenders when they would release their tax
returns. “An hour ago,” Gingrich said. Paul said he would not release
his, saying it was embarrassing how little money he made.

Romney said he would release his 2011 returns after
he files them in April. When King asked why he wouldn’t release the
previous year’s returns before the South Carolina primary on Saturday,
Romney said he wanted to make sure he could “beat President Obama”:
“Every time we release things drip by drip, the Democrats go out with
another array of attacks,” he said.

Romney, who recently acknowledged that his tax rate
was about 15 percent, well below that of many working Americans, said
his taxes “are carefully managed, and I pay a lot of taxes. I’ve been
very successful.”

Gingrich pounced, saying “if there’s anything in
there that is going to help us lose the election, we should know it
before the nomination.”