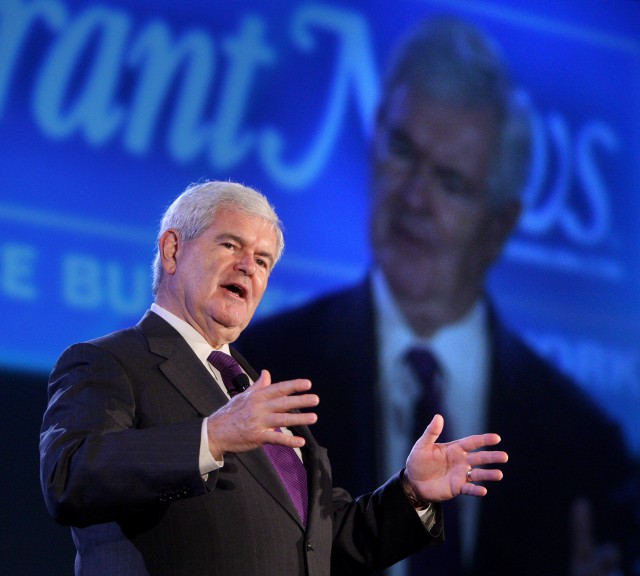 WASHINGTON — Now, it’s official. Newt Gingrich, a
former Georgia congressman who became the first Republican speaker of
the House in decades in 1995, announced his candidacy for president in
2012 Wednesday afternoon.

“I believe we can return America to hope and
opportunity,” he says in a YouTube video, in which he refers to his
work with President Ronald Reagan and later as speaker, when the federal
budget was balanced. “There’s a much better American future ahead.”

The announcement, teased by aides on Monday, came on
Twitter with a link to his official website, which was at times
inaccessible because of demand.

Curiously, that website includes the slogan, “Winning
the Future Together.” President Barack Obama has adopted “Winning the
Future” as his credo since his State of the Union address in January.
But Gingrich has used the phrase in the past; it was the title of his
2005 book.

Wednesday’s announcement follows a somewhat muddled
roll-out in March of his “testing the waters” phase. His campaign had
said he would announce an exploratory committee, then denied it.
Ultimately he filed paperwork with the IRS, not the Federal Election
Commission, to begin raising money under federal limits. The delayed
entry allowed Gingrich time to wind down his myriad business interests.

In 1994, Gingrich helped lead the “Republican
Revolution,” as the party took control of the House for the first time
since 1955. He was at the center of bitter political disputes with
President Bill Clinton, and presided over the first impeachment of a
U.S. president in more than a century.

Like other candidates, Gingrich has vulnerabilities
he must confront as he appeals to Republican voters in the next year.
Speaking with The Washington Times Tuesday, Gingrich acknowledged
mistakes during his leadership of the House.

“My two biggest mistakes were being undisciplined and
that I didn’t listen enough,” he told the paper. “I am working very
diligently to be part of a team and to be sure that the team leaders
have a lot of input, along with me.”

Gingrich — twice-divorced and a recent convert to
Roman Catholicism — has also used his network of political advocacy
groups to court evangelical Christians in the past few years.

Gingrich will sit with Sean Hannity for an interview
on Fox News Channel Wednesday night. On Friday, he’ll address the
Republican Convention in Georgia, which he represented in Congress. And
Sunday he’ll sit down with NBC’s David Gregory on “Meet the Press.”