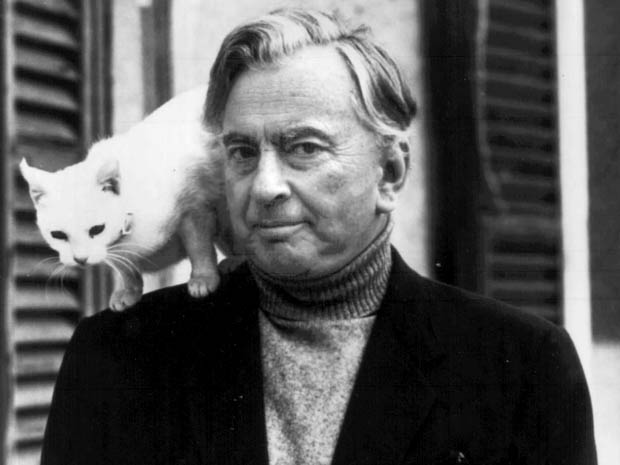 It’s 1:00 in the morning on Tuesday night. It’s been a few hours since I found out that Gore Vidal died. They say it was complications of pneumonia. I have no doubt he would have preferred something far more spectacular, an ailment with a fantastic name, a bizarre accident or at least a mystery illness, just something more fitting a life so big as his. He would have told you he deserved it.

It was just about this time of night in 2001 that I had my first encounter with Vidal. I was mostly asleep when the phone in my kitchen rang. I could hear someone leaving a message but I couldn’t make out the voice. Finally, Ellen poked me in the ribs and said she heard the name Gore Vidal. That woke me up, at least enough to stumble down the hall.

I grabbed the phone before he could hang up and then stood there in my underwear for the next few hours having a conversation with one of the great literary figures of our time. It was as odd as it sounds.

In between our discussions of a Vanity Fair project on which he wanted to collaborate, and our dissecting of the mind of Oklahoma City bomber Tim McVeigh, with whom we both had a certain relationship, he took the time to correct my grammar, something involving “me and I” or “he and me.” I can’t remember now. Whatever it was, I found it pretty pompous in the middle of the night, considering that he had called me and I wasn’t even wearing pants. I would later come to appreciate such exchanges. It was pure Vidal, he intimidated the heck out of me back then, which he both knew and relished.

I wanted to hang up on him that first night, but I couldn’t. He was inviting me for a glimpse into his world and I knew I had to look. And now, 12 years later and contemplating his death in the middle of the night looking across that same kitchen, I’m glad I stayed on the phone. For me, getting to know Gore Vidal was like walking into one of his historical novels, only his real life was far more enthralling than any fiction.

Eugene Luther Gore Vidal Jr. dropped from the womb and literally into the middle of 20th century history on Oct. 3, 1925. He was born at the United States Military Academy at West Point.

His father, Eugene, was an important figure in early aviation, having started several airline companies, including T.W.A. Eugene was eventually appointed by family friend President Franklin D. Roosevelt as the first director of the Bureau of Air Commerce, the predecessor to today’s Federal Aviation Administration.

Gore’s mother, Nina, was the daughter of Thomas Pryor Gore, the first Democratic senator from Oklahoma. Sen. Gore was famous mostly for being blind. Gore often described his mother as a drunken socialite. They weren’t real close. In 1935, Eugene and Nina divorced, which only deepened Vidal’s exposure to fame and aristocracy.

His father had been romantically involved with fellow aviation pioneer Amelia Earhart for some time, and after the divorce Gore was able to spend more time with Ms. Earhart, whom he liked, a rarity. As for his mom, she remarried to Hugh Auchincloss, the stepfather of Jacqueline Kennedy Onassis.

Vidal hated school. He didn’t fit in and he didn’t care for the structure. It wasn’t because he wasn’t smart. Gore read War and Peace while skipping school and hiding in his grandfather the senator’s attic when he was only 8 years old. He had an incredible photo graphic memory that I can attest to firsthand. It was still fully functional as recently as just a few years ago when I was working with him while he was in his late 70s.

With his intellect and his connections, it is not an exaggeration to say that Vidal could have done anything he wanted. He wanted to write and be a bigger than life personality. He succeeded at both. He published his first novel, Williwaw, in 1946 and quickly followed that book with his second offering, In a Yellow Wood, a year later. At that point, Vidal’s books were modestly successful. His publisher wanted another similar book in order to grow his audience, but Vidal had other plans. He wanted to write the book that he wanted to write, a book about homosexuality in the 1940s. His publisher was not enthusiastic, explaining to the young Vidal that it would be career suicide.

But Vidal didn’t like structure or authority. So in 1948 he rolled the dice and published The City and the Pillar. It was the 1940s version of a coming-out story. Vidal dedicated the book to J.T., which stood for Jimmy Trimble, who was Vidal’s real-life first love. Trimble was killed in the Pacific during World War II and Vidal never fully got over his relationship with him.

At the time, The City and the Pillar was beyond controversial. It was banned as pornography and panned by critics as too immoral to be worth reading. The New York Times in particular found the book offensive, which started Vidal’s famous life-long feud with the Grey Lady. Vidal claimed that he was blacklisted by the NYT and as a result couldn’t get his books reviewed in major newspapers for decades, an accusation that the paper doesn’t wholly deny. Until his dying breath he spoke harshly of the NYT as often as he could find an excuse to work the newspaper into conversation.

It wasn’t just the NYT that irked Vidal, he was famous for his feuds and seemingly never forgave anyone who crossed him. His confrontations with Truman Capote, William F. Buckley, Jr., and Norman Mailer are legendary. He once came to blows with Mailer backstage at the Dick Cavett Show. And when he spoke to me about Capote in recent times, it was as if the two had been at each other’s throats just the day before, instead of the decades it had actually been since their last sparring match.

In all, Gore Vidal published 25 novels, two memoirs, several plays for theater as well as a good many screenplays for television and film. He also was well known for his many essays, which tended to be both political and often conspiratorial in nature.

Gore Vidal lived large. I eventually stopped feeling intimidated by Vidal as I came to appreciate his acerbic wit and understand that his ego was justified and earned. But I never stopped being in awe of him. When he would start a story with the words “that reminds me of,” you were always in for a good name-dropping tale.

As I look back now, I think Vidal was just as kind and loyal to those he chose to include in his life as he was degrading and mean-spirited to those he disliked.

We worked together on a few different projects for a couple of years.

One day he called out of the blue to tell me that he was “making” his publisher in Italy translate and publish my first book, Harvest of Rage, in that country. He was living in a villa on the Italian Riviera at the time and just thought it was a good idea. He said he thought there were parts of the book that might embarrass the Vatican, which was always a pet project of his. Such bravado.

He wrote a very kind endorsement for my book that filled the entire back cover. I would never have asked him or expected him to do such a thing, which I’m certain is one of the reasons he did it. That was just how he was, at least with me. If he thought you had something important to say he was more than willing to use his clout and name to help you get the word out. That’s a rare quality and not one that I have seen anyone attributing to Vidal on this, the day of his death. But it was true for me.

All I can think of sitting here at my table in the middle of the night is that he showed me great kindness, yet I don’t know why. After all, Vidal is the man that the NYT reported had described himself this way: “I’m exactly as I appear. There is no warm, lovable person inside. Beneath my cold exterior, once you break the ice, you find cold water.”

He would no doubt accuse me of being disgustingly sentimental if I were to offer a differing point of view, so I won’t. But to this day it still feels like he randomly picked me out of the air and aided my writing career for no better reason than because he could.

We talked about writing a book together on the Oklahoma City bombing, or perhaps the hyper-conservative catholic militias that so intrigued his conspiratorial mind. But we always ended up pushing it off, as other subjects like 9/11 and Bush-era politics seemed to trump all else for Vidal. I wish now that we had found the time. I’m sure it would have been a good read, but more importantly on this day, it would have given me more stories to remember and share.

I don’t know where Vidal is this morning, but if he is in an afterlife, I am sure that he’s reading the NYT to Truman Capote at the Vatican. I’m just not sure if that means he’s in heaven or hell. He did love his feuds.