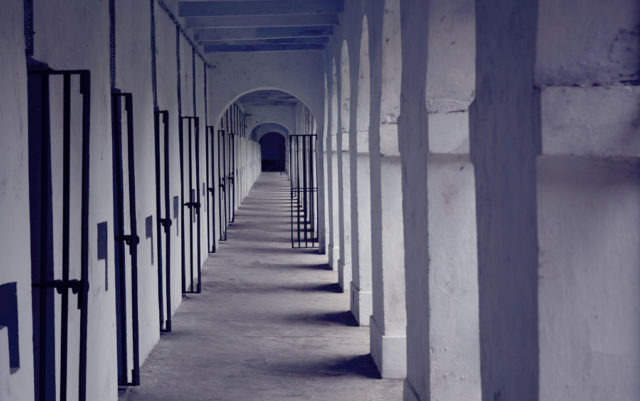 Isaac Aragon was arrested in 1998 with a half-ounce of marijuana on him. He was 14 at the time, and cannabis hadn’t even been medicinally legalized yet in Colorado. Aragon was charged with simple possession of a Schedule 1 drug — a felony offense that cost him years of his life.

Today, Aragon is a case worker for the Colorado Criminal Justice Reform Coalition, a non-profit organization that seeks to reduce mass incarceration. He works with a lot of people who were in his same position; people who were charged with a felony for simple possession of a personal-use quantity of a Schedule 1 or 2 substance and who had to do hard time as a result.

“We see it all the time,” Aragon says.

It certainly isn’t uncommon: every 20 seconds in the U.S. someone is arrested for a drug law violation. That rate of incarceration equated to some 1.63 million arrests in 2017 — 85% of which were for non-violent drug possession, according to the FBI’s most recent Uniform Crime Report.

Those are statistics that a new state law aims to address. The bipartisan legislation, ratified in May of this year, reclassifies quantities under 4 grams of nearly all Schedule 1 or 2 substances as a misdemeanor.

Effectively, it “defelonizes” possession of personal-use quantities of drugs, and reclassifies drug addiction as a public health crisis instead of a crime. It is a bill that stands to have an impact on the future of many individuals like Aragon, and families across Colorado. It’s also projected to save the state’s taxpayers millions of dollars in its first five years.

It may not be a sweeping solution to the increasing problem of drug addiction in Colorado, and some contend it doesn’t go far enough to treat the root of the problem. But it is a start.

“I pushed the legislation forward because I believe that we need to start treating addiction as a public health issue instead of a criminal justice system issue,” says Leslie Herod, Colorado’s 8th district representative, who was one of the prime sponsors of the defelonization bill while it was in the House. “The war on drugs is an abysmal failure and these types of policies, a felony for simple possession? It’s just a remnant of the Drug War, and we needed to get rid of it.”

In Colorado, a level 4 felony for drug possession (the lowest level felony) carries a minimum six-month prison sentence, costs a minimum of $1,000 in fines, and includes probation and/or diversion programs. And the consequences don’t end there: finding employment with a felony on record can be a colossal challenge, a person’s credit score plummets, they become ineligible for state and federal grant programs (meaning they are ineligible for higher education scholarships) and they lose the right to vote while incarcerated.

“Some companies still don’t like to hire me,” Aragon says. “Even though that charge is over two decades old.”

Between 2012 and 2017, Colorado saw a 106% increase in drug felony case filings, like Aragon’s. “Three out of four” of those were for simple possession, according to a special report by the Colorado Criminal Justice Reform Coalition.

Boulder County District Attorney Michael Dougherty has cases like this come across his desk frequently. It’s why he says he wholeheartedly supports the defelonization law. He knows that punishing a public health issue like addiction doesn’t do much to treat it.

“The best way to treat drug addiction is not with a felony conviction but rather to connect the person with treatment,” Dougherty says. “I think it’s important that we try and recognize how we can help people get back on the right track and not just continue to have them cycle in and out of the justice system.”

Aragon echoes the sentiment. “If there were more treatment facilities than there were prison facilities, I think we’d see recidivism rates going way down,” he says.

Colorado’s recidivism rate is 50% (10 points higher than the national average), meaning that half of all 19,862 people who were sentenced to prison in this state in 2016 will go back to prison for another crime after they’re released. It’s a vortex that’s hard to escape.

And the racial distribution within that vortex is not equal: nearly 60% of state prison populations are black or Latino, according to drugpolicy.org, meaning that this new defelonization law should have a significant impact on those minority communities.

“Almost inevitably you’ll find that drug arrests follow certain patterns with regard to race and class,” says Erich Goode, an American sociologist, retired professor and author of Drugs and American Society. “A depenalization law should have consequences for working-class people and persons of African descent in that it diverts them to a less vulnerable legal position.”

Which could have lasting effects on those demographics for generations to come, Goode says. It will relieve a threat and punitive burden from minority communities across the state; from families who might otherwise be struggling to pay bills while a father or mother or child is locked up in prison, to someone who couldn’t get a job because they have a felony for drug possession on their record.

Of course, minorities and poorer communities won’t be the only demographics that this defelonization law will touch. It gives everyone a second chance, says Rep. Herod. This law is intended to be an opportunity to seek treatment and heal.

The National Survey of Substance Abuse Treatment Services indicates that in 2017 there were 381 operating treatment facilities in Colorado and some 32,213 clients. Overdose deaths in this state have been increasing steadily since 1999, according to the Colorado Department of Public Health and Environment. Currently, overdoses from opioids like heroin and fentanyl kill about 48 people in this state every month.

That’s why Erich Goode believes that a state can never put enough money toward treatment programs.

“I think treatment and rehabilitation ought to be funded to the extent that the taxpayer will say, ‘This hurts,’” Goode says. “The country cannot arrest its way out of the drug problem.”

The law appropriates $1.8 million for the 2019-20 fiscal year for a rehab grant program. Herod admits she wishes that number was higher — but that doesn’t mean that progress isn’t being made, she says.

“Colorado has put in millions of dollars towards treatment over the past couple of years,” Herod says. “So the Colorado general assembly is definitely moving in that direction.”

Considering how much cheaper treatment programs are than the cost of incarceration, that seems like a wise approach. In Colorado it costs on average $39,303 per inmate per year, according to a national survey done by Vera in 2015. Compare that to the average cost of outpatient treatment ($5,000-$10,000), or even to the cost of the most lavish, long-term private inpatient rehab treatment programs (which run in the $20,000-$25,000 range), and the state is still saving a good chunk of change.

According to a report by the Joint Budget Committee, this law could save between $8.6 and $13.7 million by relieving prisons of people incarcerated for simple drug possession over a five-year period.

That was one of the big selling points for Republican support, Herod says. Republican Representatives like Shane Sandridge of El Paso County worked closely with Herod to push this law through. As a former law enforcement officer, Rep. Sandridge understood the kind of time and resources that would be saved if police weren’t pursuing personal-use possession as a felony offense. Which was in part why, Herod says, Sandridge offered this defelonization bill so much support from across the aisle.

“We’re going to see hundreds of people each year who will no longer be put in state prisons with a felony offense,” Herod says. “This will help move people towards getting the help that they need.”

Dougherty adds: “As long as we continue to move forward with an eye towards treatment, I think this is a trend that should continue for the people in our community. I think it’ll help everyone.”

However, the new law doesn’t work retroactively. Prior felony possession offenses will not be expunged from anyone’s record automatically, and people currently in prison for possession will not be released.

While the law technically isn’t effective until “on or after March 1, 2020,” Herod says that it is already influencing judges and their decisions.

“We’ve already seen some judges in different jurisdictions not applying the felony and getting folks into drug court or other treatment opportunities,” she says. “So while the [law] has not yet taken effect we know that it has already had a big impact on the way people are looking at sentencing for simple possession.”

Herod points out that Colorado was not the first to make this change. This state was in fact the sixth to defelonize personal-use amounts of Schedule 1 and 2 substances — behind California, Utah, Connecticut, Alaska and Oklahoma respectively — since 2014, and indication that a growing number of Americans are beginning to view simple possession as a public health crisis, not a criminal justice opportunity.

That shifting perspective is hopeful, according to Aragon, Herod, Dougherty and Goode. It’s a trend that could have powerful implications for America’s failed war on drugs, and for the people of Colorado.