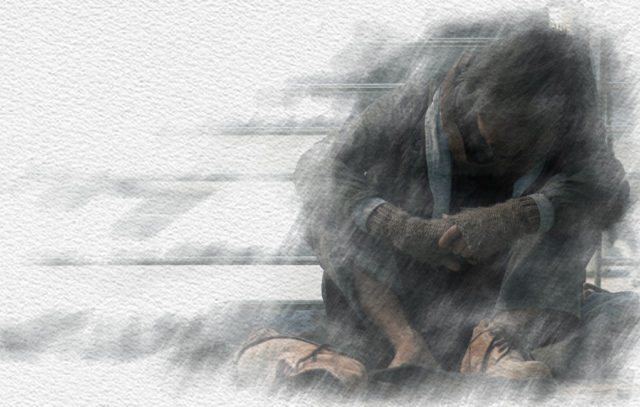 As Daniel (a pseudonym) walks up to the Severe Weather Shelter operated by Bridge House on 30th Street and Valmont, he goes through a health screening in a tent outside. After getting his temperature taken and answering questions about his recent health, he’s given a green sticker before he can enter the facility. It’s a sign that he’s all clear — not showing symptoms of COVID-19, the disease caused by the quickly spreading coronavirus.

“Everything changes day to day,” Daniel says, as Homeless Solutions Boulder County (HSBC) and its partner service agencies have been constantly adapting to public health recommendations in light of the global pandemic, causing cities, businesses and most of daily life to shut down.

“We realized pretty early on that the homeless were going to be the ones that were possibly the most at risk and so that’s why we put a real focus on trying to come up with a solution and staying ahead of this,” says Kurt Firnhaber, the City of Boulder’s housing and human services director. Not only is this population at medical risk, given they live outside and often have weaker immune systems, Firnhaber says, but they also often stay in close quarters at shelters in Boulder and Longmont.

“And if they become positive, there’s not a place for them to recover, and the hospitals simply cannot absorb that,” he says. “In a certain way we’re sort of planning for the worst and hoping for the best.”

For Boulder County and city officials throughout the region, as well as homelessness service providers, the pandemic has only exacerbated the shortcomings of the system. HSBC has mobilized to do everything it can to separate unhoused individuals who are sick from the rest of the population. At the same time, everyone is focused on continuing to provide services for clients already in the system, making sure they get the essential food, housing, and economic and mental health help they need.

Attention Homes is connected to more than 100 youth in the community. The organization has eliminated its street outreach program for the time being and the drop-in center and shelter are only serving youth 18 and under at this point, whereas before, young adults up to age 25 were welcome.

The drop-in center is also prepared as an isolation space for any youth exhibiting symptoms or who may have tested positive for COVID-19. As of this writing, it has not been needed, Nelson says.

On Friday, March 20, the cities of Boulder and Longmont and Boulder County opened a COVID-19 Recovery Center (CRC) for unhoused individuals. Located at the East Boulder Rec Center, the CRC is staffed 24 hours a day by government workers and community volunteers, although more are needed. It’s not a walk-up shelter, rather a place for people to go once they’ve been screened elsewhere. The Medical Reserve Corps, a national network of medical and public health volunteers, is providing daily medical rounds and care.

Currently the CRC is set up to hold 47 people, with the possibility of opening up to more space using other rooms and even the gym. Prior to intake at shelters on Wednesday, March 25, there were six individuals staying at the CRC.

“While the numbers have been low, I’m not sure that’s representative of what’s actually going on,” Firnhaber told City Council on March 24.

And for those unhoused individuals not experiencing symptoms, there are few places they can publicly be, as stay-at-home orders have gone into effect across the region.

“We’re in a unique, challenging situation that we’re violating the social distancing rules every single day just by being open,” says Greg Harms, executive director of Boulder Shelter for the Homeless in North Boulder.

It’s a problem faced by all shelters in the area, many of which are changing normal operations due to the coronavirus.

“Our providers have been collaborative, adaptable and creative through all this, as the COVID-19 global pandemic is unprecedented,” Alice Kim, with Boulder County, writes in an email.

Most shelters and service providers have suspended all non-essential volunteers and changed food services to prepared and bagged meals, rather than hot food services. All have tents outside their facilities to screen for possible COVID-19 cases. BOHO is now operating the coordinated entry system for HSBC over the phone.

All public buildings including libraries and rec centers — places frequently visited by unhoused individuals — closed recently as well. And all of the agencies are adapting to the changing needs of the population.

“When we talk about ripple effects, the unintended consequences of closing facilities is that our most vulnerable population doesn’t have access to basic resources that they normally can count on,” says Joseph Zanovitch, executive director of Homeless Outreach Providing Encouragement (HOPE) Longmont. With rec centers closed, in particular he says, there isn’t a place for unhoused individuals to shower.

“We didn’t expect this when we started hearing about closures, we didn’t even think about this,” he says.

Now, HOPE is opening up a little bit earlier to allow people to come and shower at two different Longmont churches it uses each week.

In Boulder, Isabel McDevitt, the executive director at Bridge House, says people utilizing the severe weather shelter have typically not had access to showers, but they are still exploring options.

“The bathrooms and the facilities that people have been using in public buildings … are certainly being missed right now. I can guarantee that,” she says.

Several of the providers are also offering virtual counseling to help their clients manage anxiety and other mental health issues that may arise or worsen due to the stress of the pandemic.

“Housing instability and homeless individuals are always challenged every day when things are running normally, and when there is a crisis, they feel it the most,” says Kristina Shaw with Mental Health Partners.

Despite all of the changes, Harms and Zanovitch both say the number of people seeking services has remained fairly consistent the last few weeks. Firnhaber told City Council on March 24, he actually expects fewer people in the shelter in coming weeks as more are transferred to the CRC. At Attention Homes, Nelson says, there have actually been fewer people walking up to the shelter and drop-in center than there have been in many years, “either because they are sort of isolating wherever they are, [or] because they don’t want to be exposed.”

But Nelson says he doesn’t expect that to last. The need for Attention Homes and other homelessness services could dramatically increase in the weeks and months to come, he says, as many already on the verge of economic instability lose employment.

“We’re really concerned about a big influx,” Nelson says, “as the numbers of people who have need for those kinds of resources continue to grow, especially people who are experiencing homelessness for the first time. They’ll want to come and try to figure out what they can do.”

With the rapid spread of the disease, forcing people into shelter-like environments may not be the best practice during all of this, Nelson says. “There’s a common-sense piece to it that it might be safer if we can help people stay on the streets safely for the time being.”

Firnhaber says enforcement of Boulder’s camping ban, especially for individuals, as opposed to encampments, is not a huge priority at the moment. He told City Council on Tuesday night that from a public health perspective, individuals experiencing homelessness are safer outside rather than congregating in facilities.

“This is just another example that the sheltering system is less than optimal and that the real solution for people is for them to have their own place,” Harms says. “This crisis just amplifies that notion for us.”

For the most part, however, Harms says people in our community experiencing homelessness are a resilient group, and people have been adapting well to the constantly changing situation. In fact, Nelson adds, the rest of us may even be able to learn something from them.

“For young people who have been on the streets or experienced homelessness or have been through a lot of trauma and crisis, that’s a population to learn from,” Nelson says. “They’re just taking that resiliency and applying it daily.”

On Friday, March 27, the City of Boulder and services providers changed some programs for people experiencing homelessness. See Firnhaber’s list of updates here.

Correction: A previous version of this article misstated Greg Harms title and affiliation. We apologize for the inconvenience.