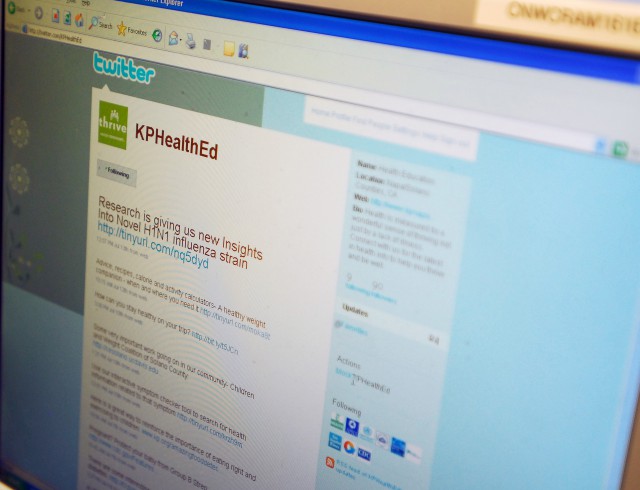 —
has rolled out advertising on its site for the first time, a
significant step in converting the social network’s explosive growth
into cash.

Called “promoted tweets,” the ads from such companies as , and began appearing atop search results Tuesday.

But a more controversial move is expected later this year, when Twitter plans to test placing ads in users’ message stream.

The advertising scheme, which was unveiled in a
company blog Tuesday, quickly became one of the most talked-about
topics on the Twitter site. Some said they didn’t mind ads popping up
in their Twitter feed; others threatened to leave the service.

The decision could mark an inflection point for Twitter, the third-most popular social network after and MySpace.

Like other social networks, Twitter has agonized
over how to profit from its popularity without upsetting users. Twitter
co-founder Biz Stone called it a “stubborn insistence on a slow and
thoughtful approach to monetization.”

Now Twitter, based in ,
is gingerly putting a concept into play in hopes of uncorking a steady
stream of revenue. It’s relying on an advertising model that is a twist
on how places sponsored advertising next to search results.

for years faced similar doubts before defying skeptics by turning its search engine into a moneymaking machine.

“People are wondering if that’s what’s going to happen with Twitter now,” analyst said. “There are a lot of ways to do this wrong. That’s why they are being so careful.”

Users have flocked to Twitter, which has become a
pop-culture icon for pioneering a whole new form of communication.
Bloggers in their bathrobes and celebrities such as broadcast 140-character messages, known as tweets, that others may
read. Twitter had 22.3 million users in March, up from 524,000 a year
earlier, said.

Expectations are sky-high for the 4-year-old start-up that has raised more than in venture funding. It was recently valued at .

“Twitter’s success depends on its ability to gather
attention and turn that attention into money,” Bernoff said. “So far,
Twitter has been incredibly successful at gathering attention and a
total flop at making money.”

Twitter took an initial step toward profit last year when it clinched deals with and
to put its real-time updates in search results. That brought in enough
money to make Twitter profitable on an operating basis. Twitter has
other moneymaking ideas, such as adding commercial or premium accounts.

But for now it’s hoping that advertising will give the company the biggest boost.

The ads will enable businesses to inject themselves
into the conversation on Twitter. When a Twitter uses searches for a
word that an advertiser bought, a 140-character message labeled as an
ad will pop up at the top of the results. One ad will remain at the top
of each page of search results, the company said. Twitter will score
these ads on how well they resonate with users. Those that don’t grab
attention will eventually vanish.

Companies will pay per thousand people who see the
messages. Eventually Twitter will charge based on how users interact
with the ads. It will further hone the advertising using location data.

Later this year, promotions will begin appearing in
a user’s Twitter stream even if the user does not follow the
advertiser. That’s the riskier proposition: Twitter users may feel
those ads are too intrusive.

,
vice president of brand, content and online, said his company welcomed
the new avenue to reach more users and participate in their real-time
conversation. “When people search for ‘ in Twitter, they will be more likely to see our tweets with this new product,” he said.

It’s too soon to say whether Twitter is on the right track, analyst said.

Stone emphasized that Twitter’s business model was a work in progress.

“This is a new thing, and we expect to iterate to make it better,” he said.

Twitter plans to reveal more information about how
it will share revenue with third-party software developers Wednesday at
its inaugural developers’ conference, called Chirp, in .

Over the last year, companies such as Ad.ly Inc. of ; Sponsored Tweets of ; and of have sprung up to broker advertising deals in which brands pay Twitter users to plug their products.

It’s unclear whether advertisers will switch to
Twitter’s ad system or continue to work with third-party companies.
MyLikes founders and said Tuesday that they had raised in funding from former colleagues at .

“The Twitter ad strategy is definitely interesting,
but we think that ads created by influencers whom people are actually
following can be much more powerful,” Reddy said.