“I hate to use the word socializing because I’m not a socialist,” Douglas Bruce told Boulder Weekly in the exhibition hall at the Western Conservative Summit at the Denver Convention Center on Friday, June 8, when asked why he enjoyed the annual event. The controversial figure behind Colorado’s Taxpayer Bill of Rights (TABOR) joined approximately 2,000 other conservatives from across the state and country for a chance to gather, network and strategize, as several dozen speakers and conservative thought leaders graced the stage.

What its organizers call “the largest gathering of conservatives outside of Washington D.C.,” the Western Conservative Summit (WSC) is an annual conference in Denver started in 2010 by the Centennial Institute, a think-tank based at Colorado Christian University in Lakewood.

In 2016, Donald Trump, then a Republican candidate for president, spoke. This year, two of the most embroiled cabinet members of his administration addressed the crowd.

Scott Pruitt touted his accomplishments as administrator of the Environmental Protection Agency (EPA) while failing to mention there are several pending investigations into his spending, travel and management of the regulatory agency.

Before Pruitt took over the EPA, he said, the regulatory agency was “a bastion of liberalism.”

“It is where they went to advance these worldviews that are antithetical with what I’m sharing with you tonight,” he said.

In encouraging the audience to “advance liberty and freedom” today, like the U.S. founders did at the inception of the country, the administrator quoted the biblical book of Ecclesiastes: “Do not say why are the old days better than these, it’s unwise to say such a thing.”

The apparent hypocrisy seemed lost on WCS attendees, as the hard-to-miss, red Make America Great Again hats sprinkled the audience. (And if that seems too biased of an observation for a news reporter, tell it to the conservative outfits filling the media tables, whose reporters often broke out in applause and standing ovations for speakers at WCS.)

Pruitt went on to promise the 2015 Waters of the U.S. (WOTUS) rule “is going to go away this year,” and prided himself in reenergizing the coal industry, dismantling the Clean Power Plan and pulling out of the Paris climate agreement.

“We as a country have nothing to be apologetic about to the rest of the world on how we do business: in growing jobs and advancing the environment,” he said.

He boasted that the agency has saved $1 billion in regulatory costs in the last 16 months, while improving air quality and decreasing our carbon dioxide footprint.

“Air quality is 10 percent better in this country under the Trump Administration,” he said, although it was unclear exactly what he was referring to, and the national EPA press office didn’t respond to questions attempting to clarify his remarks before press time. Several experts Boulder Weekly called to fact-check this claim agreed that although 2017 data has not been made public yet, any gains in air quality in recent years would be attributed to previous administrations and policies, especially since under Pruitt, the EPA has sought to roll back emission regulations on fossil fuel development and vehicle emission standards. Plus, according to an April 2018 study by several National Center for Atmospheric Research (NCAR) scientists, among others, gains in air pollution reduction have slowed in recent years, making future ozone pollution goals more difficult to meet than previously thought.

Pruitt also claimed that “from the years 2000-2014 we reduced our carbon dioxide footprint by almost 20 percent. And just recently an additional 2-plus percent,” which would also be attributed to previous administrations’ policies.

He also committed to increased transparency and public rule-making at the agency and reversing what he called the previous administration’s intent to concentrate power in Washington D.C.

“We have given a rebirth to the rule of law, a rebirth to process, and we’ve renewed our focus on cooperative federalism. And what has happened is truly transformative.”

Pruitt assured WCS attendees that, contrary to popular liberal belief, we don’t have to choose between protecting the environment and growing the economy, something he appears committed to as head of the EPA.

“You can have your cake and eat it too,” he says. “Those folks who say that [you can’t], I don’t understand, what else are you supposed to do with cake?” 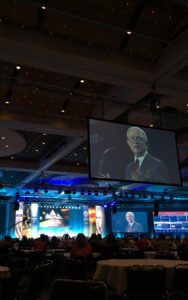 Attorney General Jeff Sessions spoke earlier in the day, also singing President Trump’s praises, while avoiding topics that often land him at odds with the president like recusing himself from the Russia investigation and his strong stance against legalized marijuana.

He did draw uproarious applause a couple of different times, the loudest of which came with his commitment to support law enforcement.

“We know whose side we’re on; we’re on the side of police, law and order, the American people, and we back the blue,” Sessions said. “In this Trump Era, the ACLU isn’t going to be making and setting our law enforcement policies. The professionals are.”

While he promised to continue fighting for the right of free speech and religious expression, “The first civil right in America, we have to note, is to be safe in our communities,” he said. “That applies to poor people and minorities, who are often struggling financially and they can’t live behind and in gated communities; they are entitled to public safety, too.”

Sessions’ refusal to defend the constitutionality of the individual mandate in the Affordable Care Act drew loud applause, as did his dedication to immigration reform, as he tied the opioid epidemic to lax border enforcement.

“If we’re going to end the drug crisis we have to secure the border, and if we’re going to have a secure border then we’ve gotta have… a wall,” he said slowly so the audience could join in. “Build that wall,” the hall echoed.

He defended his recent “zero tolerance” policy at the border, criminally prosecuting migrants for illegal entry. The policy has drawn widespread scrutiny in recent weeks, as it has separated children from parents in record numbers.

“I have to say, we have to know this, we already have the most generous immigration laws in the world,” he said. “It cannot be that anybody seeking a better life anywhere in the world can walk into our country, contrary to the laws, and then demand services and benefits.”

This was a few days before Sessions announced on Monday, June 11 his unilateral decision and directive to immigration judges to deny asylum to people based on their experience of domestic and gang violence.

The Attorney General also doubled-down on his commitment to challenge sanctuary jurisdictions for their refusal to cooperate with Immigration and Customs Enforcement, expressing bafflement at the idea of protecting people who have committed crimes from deportation. “And if you won’t deport someone who came here and committed a crime, let me ask you, who will you deport? The answer is nobody. In effect this is an open borders policy,” he said, challenging several Colorado cities with such policies. “It cannot be that someone who illegally crosses the border on Monday, gets to Denver or Boulder or Aurora on Wednesday is home free? Never to be removed from this country?”

None of what Pruitt or Sessions said at WCS was especially new, but the large stage gave Trump’s cabinet members a chance to gloat in front of an adoring crowd.

“In the Trump era, we’ve already seen a historic string of victories for conservatives and the American people,” Sessions concluded. “Here is my message: We’re going to keep up this pace; we’re not slowing down. We’re determined to keep winning and winning and winning. Are you tired of it yet?”