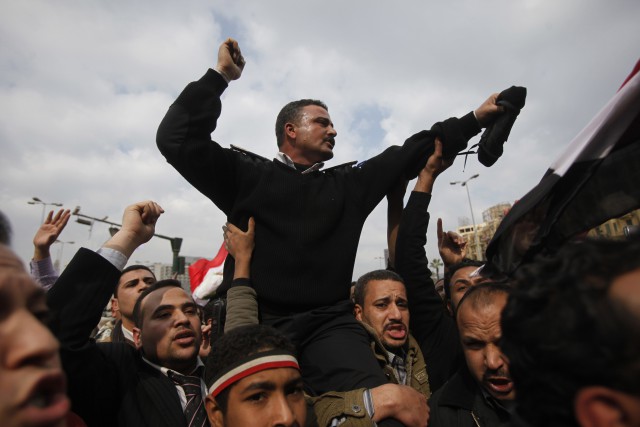 Locals with ties to Egypt are expressing their support for the recent protests in Cairo that led to President Hosni Mubarak’s recent resignation.

After 18 suspenseful days of protesting in Cairo, on Feb. 11 Mubarak stepped down, fueling millions of people’s excitement in their fight for democracy. The historic event was monumental for some people in Boulder who have connections to Egypt. Although they were thousands of miles away, many on the CU-Boulder campus were intensely following the protest, and felt a strong connection to the spirited and determined people in Tahrir Square.

Zyad Hassan, a Cairo native, is a CU doctoral candidate in computer engineering. He came to Boulder in 2008 to pursue his studies, leaving his family in Egypt. He had an elated reaction to the protest and called it “a dream coming true.”

“The frustration of the people has been rising over the past few years,” he said. “There has been no real democracy, no real freedom of speech and brutal police.”

Hassan followed the protest very closely, and when the protest turned violent, feared for his family’s safety. His wife and 4-month-old infant live near the protest site, and his parents, who are over 60 years old, often were participating in the protest.

“They just want freedom for their country,” he said. “If I was in Egypt, I would be in the protest.”

Hassan explained that the people participating in the movement were there to represent the Egyptian people as a whole. He said that there were secular people, Muslims and Christians, both men and women, all demanding the same thing throughout the entire course of the protests: freedom.

“Everyone wishes for a place where he can raise his kids in a good environment,” he said.
He hopes to return to Cairo soon and said that he wished that he had been able to celebrate with his people in the streets when Mubarak stepped down.

Osama Bilal is a CU doctoral candidate in aerospace engineering. He came to study in Boulder last August and hopes to return to his home of Cairo in the spring. He explained that the protest was revolutionary mostly because of its origins. Rather than a sole leader starting the protest, a group of young people powered the protest through Facebook.

“It is a revolution with no ideologies,” he said, echoing Hassan’s description of the Egyptian people’s unity.

Bilal said that the former regime made Egypt unsafe by releasing prisoners to spread chaos throughout the country. He explained that the Egyptians formed committees with people in every neighborhood to protect private and public properties from harm.

“My family is very safe now under the protection of the army and the youth of the neighborhood,” he said after Mubarak stepped down. “But to be honest, it was scary for me during the first days of the revolution.”

Bilal said that he would have been a participant in the protest had he been in Cairo. Most of his friends, professors and some family members were among the protestors.

“It is time for Egypt to return to its right place between nations and be a great source of culture and civilization,” he said.

Najeeb Jan, a geography instructor at CU, attended school in Pakistan for many years and is now studying the concept of political Islam in Pakistan. Regarding the protests in Egypt, he feels that a democracy should be established in Egypt due to the scale of the movement and the widespread appeal.

“I think that the interim council should lift its state of emergency and allow freedom of press and gathering, and that the conditions for a free and fair election should be held as soon as the Egyptian people feel they are ready,” he said.

Jan explained that this is an exciting time due to the courage, determination and nobility of the Egyptian people.

“It has brought a sense of hope and dignity to the people after a long time,” he said.

CU junior Cassie Dymecki studied abroad in Cairo last fall and followed the happenings of the demonstration very closely. She explained that the Egyptian people were frustrated at the time she was there because nothing was changing in their society. Mubarak had been president for nearly 30 years.

“I was hoping they would do something,” she said of the Egyptian people. “I was excited for them.”

Dymecki said that she enjoyed her experience in Cairo. She appreciated the Egyptian culture and the uniqueness from America. However, during her time in Egypt, she said she immediately noticed the continued corruption of the people by the government.