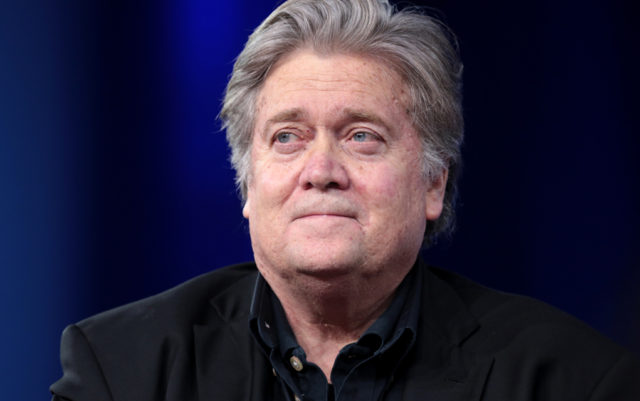 It was January 2019, and Benjamin Teitelbaum was sitting in the basement of Steve Bannon’s townhome behind the Supreme Court building in Washington, D.C. One of Bannon’s fixers, Andy Badolato, got Teitelbaum a drink and told him to “sit tight” while he waited to interview the famed political operative. Badolato, meanwhile, made some phone calls, one of which, Teitelbaum says, sounded like a business pitch trying to lure in an investor.

“He’s trying to get this person to build a wall,” Teitelbaum recalls. “And I was thinking to myself what do you mean build a wall? Why would you raise money for a government initiative like this?”

At the time Teitelbaum says it was just another “strange” detail in a series of encounters he had with Bannon and associates while researching his recent book War for Eternity: Inside Bannon’s Far-Right Circle of Global Power Brokers. Although the CU-Boulder professor and radical right scholar included the scene in the book, he did not suspect foul play and had no idea it could eventually bring Bannon down.

On Aug. 20, Bannon, Badolato and two others were indicted for their involvement with “We The People Will Fund The Wall” campaign, an initiative that raised more than $25.6 million and led to the construction of less than a mile of border wall in New Mexico. Federal prosecutors in New York allege the men siphoned hundreds and thousands of dollars of donations to their own coffers instead of directly financing a wall at the southern border as promised. Each is charged with conspiracy to commit wire fraud and money laundering and could serve up to 20 years in prison if found guilty.

We recently caught up with Teitelbaum to talk about his reaction to the indictment, his interactions with Bannon and his research about Traditionalism, an obscure 20th century ideology rooted in its attacks of modernity to which he says Bannon ascribes.

The interview has been edited for length and clarity.

Boulder Weekly: Were you surprised by the indictment?

Benjamin Teitelbaum: I was. It wouldn’t have surprised me that Bannon ends up in some kind of legal trouble, just because of the amount of projects and the amount of money and the amount of shady characters floating around. But this was clumsy, and it was deliberate at the same time. It was just a little weird that something like this would be his first indictment. I mean, this is the guy in Trump’s inner circle who got through the Mueller investigation without an indictment and everything else surrounding that campaign. And he knows money laundering. He’s worked at high-level business deals for decades.

BW: After your first interview with Bannon in the book, you write: “Bannon was well-read and quick-thinking. Brilliant, even.” Does that still hold up under this indictment?

BT: Yes. It’s a different kind of brilliance though. I work in the university world, so I see a lot of people who are brilliant minds and thinkers and have delightful curiosities, but who are practical train wrecks. And it’s more in that sense. The brilliance of Bannon is the energy of his intellectual mind. I think a lot of people attach the term brilliance to moral integrity and practical good behavior. I don’t connect those concepts.

BW: The quote from your book concludes: “And yet our conversation also left me curious and unnerved.” Has that changed?

BT: This (the indictment) doesn’t make me scared of him anymore, let’s say. Some of our conversations made me scared of him and in new ways. People talk about, ‘Oh, he’s a white nationalist,’ and I don’t say that about him. But he’s something else that is also very scary in its own way, and in some ways it’s more scary because it’s so off the map. This latest thing, though, he just seems like a common fraudster. There’s nothing scary about that.

BW: What does scare you about Bannon?

BT: The deep particulars of this way of thinking that I explored with him and that I eventually traced him using as a basis for political activity. One of its core concepts is the notion of cyclical time. It seems kind of benign, but it’s the belief that progress is really just an illusion and that the greatest virtues available to us are those that have already been, not those that we are going to someday create. And that ostensible progress is really something else. So everything we read in history, every movement that we see as having, let’s say, emancipated a group of people or created a more just society, all of those by definition are targets for him. It’s not just a secular dry political analysis, there’s a religious, spiritual mandate too. Embedded in all of this also is the notion that conflict, destruction, breakdown are all virtues to get us to a better place — to return us to a virtue that used to be there. It’s a nostalgia in hyperdrive. It’s a nostalgia that demands the right to recreate the past. Make America Great Again is a bizarrely succinct (I think, accidentally succinct) expression of it.

BW: How does the “We the People Will Fund the Wall” fall under this Traditionalism?

BT: What Traditionalism has done for Bannon in his thinking is that it has taught him that this age that we live in right now is an age of decadence, it’s an age of darkness and depravity, and one of the hallmarks of that is borderlessness in a very encompassing sense — not just a lack of national borders, but also differences in identity, differences between cultures. In this age that we’re living in right now, he sees borders as having disintegrated as a whole and thus also that reestablishing borders in one domain will support the reestablishment of borders in another. So creating a world that is more segmented where we all are in our little silos is a way to bring back a more virtuous society in his mind.

BW: You were at the 2019 “We the People Will Fund the Wall” event in New Mexico to interview Bannon as part of your research. What was it like?

BT: They were giddy. For all of the failures, the unmaterialized, unrealized agendas that Bannon had, here was something tangible — massive steel pillars and actual concrete. They were proud of themselves. So that was the spirit, if I can kind of characterize it.

BW: Is there anything else from your interactions and knowledge of Bannon that plays into this?

BT: There’s the man himself, and then there’s the discourse around him — about him being a fraud, not just having committed an act of fraud, that it’s all smoke and mirrors and there’s no substance in this person. He’s far more complicated than that. His person, his being is more chaotic than for him to just be a simple fraud. I’m somewhat leery of that being the conclusion if for no other reason than I don’t want to underestimate him or people like him in the future.