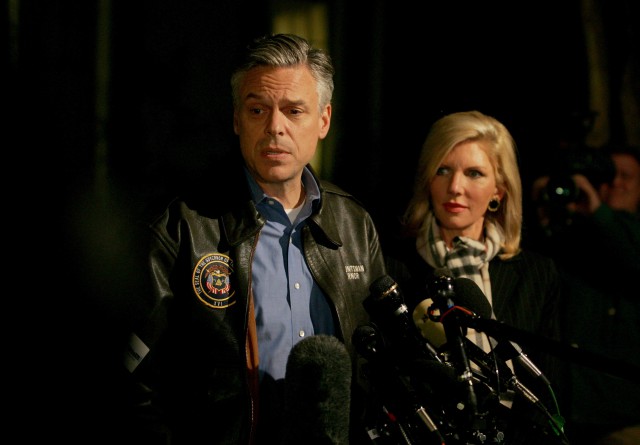 MYRTLE BEACH, S.C. — Whether Jon M. Huntsman Jr. has a
political future or not, he will go down in history as the first
American presidential candidate to deliver a retort in Mandarin Chinese
during a nationally televised debate.

Huntsman, of course, hopes he’ll be remembered for much more than that.

“Today, our campaign for the presidency ends, but our
campaign to build a better and more trustworthy America continues,” he
said in brief remarks Monday morning at the Myrtle Beach Convention
Center, scene of a TV debate that will go on without him Monday night.

He left the race as he began it, with a gracious, if
noticeably unemotional, speech that featured a high-minded appeal for a
more civil brand of politics. Huntsman deplored the way the GOP race had
“degenerated into an onslaught of negative and personal attacks not
worthy of the American people and not worthy of this critical time in
our nation’s history.”

Left unsaid was his own, rich contribution to that
toxic atmosphere. In recent months, he leveled increasingly desperate
attacks on Romney — whom he endorsed Monday morning, in the interests of
party unity, as the man “best equipped” to defeat President Barack
Obama in the fall.

Notably, Romney, who arrives here Monday, wasn’t
present to accept the backing of his long-time rival (their enmity stems
from family feuds in Utah stirred by Huntsman’s father, Jon Sr., who
attended his son’s valedictory remarks to a room filled with reporters,
cameras and top campaign advisers).

The former Utah governor didn’t completely ignore
what he called “the space between” him and Romney on issues. But as he,
wife Mary Kaye and four of their daughters walked off the stage,
Huntsman ignored shouted questions from reporters about his own slashing
comments, delivered just within the last eight days, calling Romney
both “unelectable” and “out of touch.”

In time, those words will be forgotten. And even
before Huntsman exited the 2012 contest, his unsuccessful run was
already being measured against a future try — perhaps as early as 2016.

It’s unlikely that Huntsman met his own goals as a
presidential candidate, and an argument can be made that he did
virtually nothing to advance his future prospects. That would be
particularly true if Romney is elected and declines to offer him a
decent job.

On the positive side, Huntsman leaves the race with
higher name ID, at least among voters who were paying close attention to
his candidacy. He didn’t particularly impress fellow Republican
politicians but now has a better idea of what it takes to be a
successful national candidate (more than running a one-state campaign,
for starters). In his remarks Monday, Huntsman alluded to the education
he got over the last seven months, when he said he was stepping down
“with an even greater appreciation for American democracy.”

It’s the rare White House contender who gains the
nomination on the first try. Even Ronald Reagan had to make multiple
runs. Romney is just the latest example of the importance of lessons
learned. His second time around is producing a noticeable jump in his
campaign skills — and results.

Huntsman’s inability to emerge in New Hampshire, a
state that takes its retail politics seriously, exposed his weaknesses
as a campaigner (again, Romney is proving that an authenticity gap need
not be a disqualifier). No doubt Huntsman will have a better rationale
for his presidential ambitions, if he runs again, and a more carefully
planned and executed campaign organization.

Still, it’s hard to ignore the fact that he failed to
measure up in his just-ended campaign, which drew a level of media
attention far out of proportion to his performance. As a result, the bar
will be much higher next time, and Huntsman will be under greater
pressure to prove that he can connect with Republican voters.

How he spends the interim also matters. If he’s
lucky, he’ll be a Romney appointee. If not, he can carve out a role as a
spokesman on issues — like foreign policy — that play to his strengths
and experience. His speech Monday contained elements of his rather
eclectic mix of ideas — from a strong desire to reduce U.S. military
involvement and stop “nation-building” overseas to a tea party-ish call
for congressional term limits.

Huntsman’s background as an Asia hand remains one of
his most powerful credentials, particularly if foreign policy emerges as
a more salient issue in a future presidential election. In that regard,
his diplomatic resume could wind up being more important to his future
than his dubious achievement as a Chinese-speaking footnote in campaign
history.