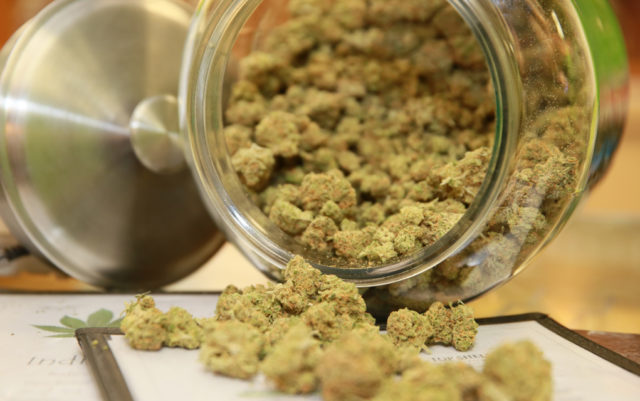 It all started with White House press secretary Sean Spicer suggesting that the federal government would crack down on states that have legalized recreational marijuana.

At a routine press conference on Feb. 23, Spicer responded to a reporter’s question about the Trump administration’s stance on recreational pot, a subject the administration had yet to specifically address.

Spicer called medical and recreational pot “two distinct issues,” stressing the precedence of federal law only on the later (a 2011 rider prevents the Department of Justice from spending federal money to prosecute medical marijuana). Spicer said states could expect “greater enforcement” of federal laws against recreational marijuana use.

The reaction from leaders of states that have legalized recreational pot was swift, with the governor of Washington and the lieutenant governor of California writing letters to the DOJ in defense of states’ rights.

Although lagging a bit behind his peers, Colorado Governor John Hickenlooper eventually made statements in favor of legalization when he appeared on Meet the Press on Feb. 26.

“There has been no spike in use by teenagers, and we’re getting anecdotal reports of less drug dealers,” he said. “Maybe this system is better than what was admittedly a pretty bad system to begin with.”

But exactly where state’s rights begin and end is still up for debate.

On Monday, Jeff Sessions made his first comments on marijuana since being confirmed as Attorney General: “I am definitely not a fan of expanded use of marijuana, but states, they can pass the laws they choose,” he said. “I would just say, it does remain a violation of federal law to distribute marijuana throughout any place in the United States, whether a state legalizes it or not.”

Brian Vicente, co-author of Amendment 64 and partner at marijuana law firm Vicente and Sederberg, says states have the right to decriminalize marijuana and the right to regulate an industry. But both are more complicated in this case due to federal law.

“Obviously, this has not played out in court,” he says, “but there is a ton of case law that says states can have their own criminal laws, for example Alabama can institute the death penalty and Colorado can choose not to, so a state’s leeway on which activities are criminalized and to what degree is pretty clear and set in stone.

“It’s the idea of states having regulated industries where there is an argument that those are illegal federally and that [the federal government] can come in and try to shake that up.”

After Amendment 64 passed in 2012 Vicente says he, like many others, braced for inevitable conflict with the federal government on this very matter, but it never came. The Cole Memo laid out guidelines for states to avoid federal interference (follow state laws, keep marijuana away from youth and keep marijuana within state lines among the most important).

The most significant legal challenge to date came on the issue of interfering with other states when Nebraska and Oklahoma sued Colorado for allegedly not keeping marijuana within its borders. The case, litigated by Vicente, was ultimately dropped, but Sessions said he met with Nebraska’s attorney general who continues to complain about the negative impact of Colorado’s marijuana industry on his state.

Because of the reemergence of old issues like these, Boulder County District Attorney Stan Garnett says the changes afoot can not be relegated merely to different interpretations of federal and state law, but indicate a shift in priority.

“There was never the idea that [the feds] couldn’t [crack down] just that they chose not to,” he says. “Whether it was a wise use of resources or not was the subject to debate. When it comes to prosecutorial priorities, when do you say, ‘OK, we are going to quit chasing terrorists, or locking up El Chapo, and instead we are going to go off and use federal resources to prosecute and close down dispensaries in the state of Colorado?’”

As a member of a group of prosecutors from across the country advising the President on policies regarding marijuana, Garnett has rare perspective into those opposed to marijuana and says he is constantly surprised by the lack of understanding of what the situation in states like Colorado actually is.

“There are a lot of urban legends on both sides of the marijuana issue, but the anti-legalization forces, which are some traditional law enforcement and some other sources often paint a picture in Colorado that legalization and regulation has been a disaster.”

On Monday, Sessions’ made a series of remarks to that effect, saying “Experts are telling me there’s more violence around marijuana than one would think.”

But there seems to be near unilateral agreement among top Colorado officials and industry leaders that evidence is to the contrary.

“Criminalization did not work — it was expensive, it was unfair and it was very disruptive. The legalization with regulation scheme seems to be working better, and it certainly is not creating the same level of random criminalization that occurred in the other system.”

Garnett credits the success to the “legalization and regulation scheme,” to the combination of decriminalization and regulatory support. To dismantle one from the other, as the Trump administration is suggesting, is to essentially remove what makes the solution effective at all.

Travis Howard, founder and CEO of Shift Cannabis Company and owner of a co-located license in Colorado, thinks that something bigger may be at work, an completely alternative scheme to regulated legalization — increased criminalization.

His belief is based on his observation of three main indicators: actions by the private prisons; actions by big pharma; and concrete plans that come out of the DOJ via the White House.

“If this becomes a concerted three-way effort — the jails, big pharma and the White House — then I would have a real concern about [what might come down on] the recreational side,” he says.

Howard is referring to the ingredients of Trump’s “law and order,” a complex mechanism that requires a large and consistent supply of criminals (criminalized drug offenders), a place to put them (prisons) and a tightly regulated drug system (big pharma) in order to function as desired. For years, these sorts of theories were written off as “conspiratorial,” but in looking through the lens of legalization, they are no longer easily dismissed.

The same day as Spicer’s comments on marijuana, Sessions approved the continued use of privately run prisons, reversing the Obama administration’s plans to phase them out and writing in a memo that reducing prisons “impaired the Bureau’s ability to meet the future needs of the federal correctional system.”

While it appears the Trump administration is paving the way for a return to criminalization, at least to some degree, there is a strong and growing sense on the ground in states with legalized marijuana that the “law and order” scheme is outdated, irrelevant and would be ineffective under current circumstances.

For one thing, the distinction between medical and recreational marijuana on which Spicer insisted, although it was at one time very important in establishing legal standing for the various industries, it is now more or less irrelevant.

“Practically, [the difference between recreational and medical marijuana] is going to be an extremely difficult distinction to make and to apply in the context of a place like Colorado where [the two markets] have really blurred together,” Garnett says. “The reality is that recreational has pretty much swallowed medical in Colorado.

“I understand the concern of the industry, but my expectation remains that a major federal crackdown on Colorado’s legalized marijuana would be politically disastrous for the Trump administration and also very difficult to carry out. So I don’t think it’s likely to happen.”

Nonetheless, the firm of Vicente and Sederberg is strongly advising its clients to focus on being compliant — paying all of their taxes, fitting squarely within the laws and generally being a good neighbor.

“I think there very well could be some federal push back and targeting of bad actors,” he says. “We need to not give the feds any chance to come after us.”