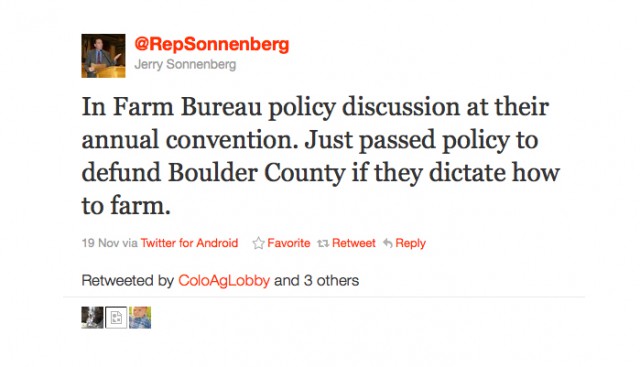 “In Farm Bureau policy discussion at their annual convention. Just passed policy to defund Boulder County if they dictate how to farm.”

This is a tweet sent by Colorado state Rep. Jerry Sonnenberg on Nov. 19 at the annual convention of the Colorado Farm Bureau, one of the agricultural powerhouses involved in generating the huge farmer turnout at the Dec. 8 cropland policy hearing.

It is an apparent threat to state funding for Boulder County, should the commissioners decide to ban or phase out the use of genetically modified organisms (GMOs) on open space land.

But for some reason, he couldn’t tell Boulder Weekly what that tweet was about.

“There was no policy to defund Boulder County,” he began. “I’m not sure exactly what you’re referring to.”

When reminded that he retweeted the message twice, Colglazier said, “I don’t recall any policy to defund Boulder County specifically, no.” When asked what “defund” means, he said, “I don’t know.”

Finally, he recalled that it was Sonnenberg’s tweet. “You would have to contact him on that one,” he said, adding that he doesn’t remember tweeting it because “those few days are kind of a flash in the whole grand scheme of things.”

In response to a question about whether the policy would be explained in the minutes of the meeting, he said, “I don’t know if we would make them public, to tell the truth.”

And when asked if there was anything to hide, Colglazier replied, “No, it’s just that it’s not a governmental, or any other organization that is funded by the government. We are completely private, we are a nongovernmental organization. It’s not that we have anything to hide, but we do have to respect our members in that, so I can’t say that we would let that out, or I can’t say that we wouldn’t. That’s not up to me.”

Colglazier offered to contact Sonnenberg and have him respond to the inquiry. The legislator never did, even though Boulder Weekly also left messages at his home and office numbers.

Finally, Boulder Weekly located another Farm Bureau retweeter of the Sonnenberg message, Nathan Weathers of Yuma, who serves as president of the Yuma County Farm Bureau. Weathers laughed when asked about the tweet, then confirmed it meant that if the commissioners end up limiting or banning GMOs — and if there were future legislative efforts to withhold state funding for Boulder County — the Farm Bureau would support those efforts.

“One of our members felt strongly enough that, he thought that if the county commissioners approved that, we should, if there was legislation that came about, defund some of the state money that goes to Boulder County,” he told Boulder Weekly. “That’s not exact, but basically that’s the gist of it. By Colorado Farm Bureau having that policy in our policy book, if something were to come through the state legislature, we would support that. … If the commissioners do decide to take away farmers’ rights to grow what they need to grow on that ground, if they’re going to take away people’s rights, then the state can take away money.”

When advised of the tweet and how its intention was described, Boulder County Commissioner Will Toor said he was not aware of the threat.

“I have to say, it sounds rather silly,” he told Boulder Weekly. “If you wanted to make a threat, you’d probably have to communicate that threat to the people you’re making a threat to. I’ve never heard anything like that. And it’s not the sort of thing I would be worried about. I don’t think that there’s any chance that a majority of the state legislature would decide they’re going to punish an individual county for decisions that a county would make about how they’re going to manage their lands. I just don’t think that’s reasonable.”

Toor added that such a threat wouldn’t make a difference anyway.

“We’re going to make the decision based upon our assessment of what’s in the best long-term interests of the people of Boulder County, and it’s going to be based on all of the public input we’ve gotten on all sides, the reading we’ve done in the literature, the analysis we’ve gotten from staff, and the recommendations we’ve gotten from our three advisory boards.”

County Commissioners Cindy Domenico and Ben Pearlman both told Boulder Weekly that they had not heard of the threat, either.