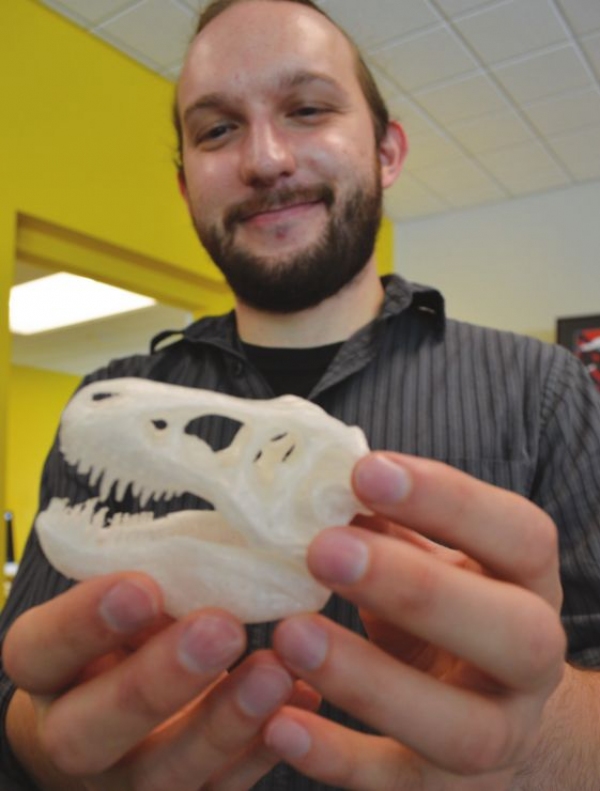 Once upon a time, when books were rare and expensive, no one questioned what a library was for. But in the age of the Internet, when everyone can easily have home access to the sorts of resources libraries offer, the library’s purpose is less clear.

This week, the Boulder Public Library is making a bold stride forward into what libraries can be when it unveils the final piece of its recently remodeled teen space, “The Foundry,” or Makerspace, an on-site tech lab outfitted with video and audio recording/editing equipment, digital art software, digital cameras for photography and of course the new 3D printer: the MakerBot Replicator 5th Generation.

“We want to create a third space. Something that’s not school, not home, but they can come here and explore their own thing, if they wanna make their own art, we want to give them that freedom,” said Adam Watts, the Library Technology Support Specialist. “We want to make the library a place of creation as well as reading.”

In The Foundry, young makers will have access to a full Adobe Creative Suite, microphones, musical instruments, audio mixers, green screens, portable lighting equipment and more to create whatever they can imagine.

Teen library supervisor, Crystal Niedzwiadek, who calls the teens her boss, says the Makerspace is part of a growing national trend of the S.T.E.M program (science, technology, engineering and mathematics) and that even non-tech-savvy kids, or the “analog teens” as she calls them, will be able to enjoy the teen space.

The tech lab is part of the library’s $3.7 million renovation, funded by the Boulder Library Foundation. The teen space, which had its grand opening on June 26, is complete with computers, Wii video games like Rock Band, a reading nook that overlooks the trees surrounding Boulder Creek, and of course, books. The Foundry will officially open Thursday, Aug. 7 with an unveiling event from 4-6 p.m.

The room’s décor is grey and yellow themed with hexagon structures moving around the wall — why kids have nicknamed it The Hive — and peppered with teenfriendly artwork of anime characters and pop stars. Teens can also paint with watercolors on mini canvases, enjoy board games and crafts or even put together mini electronics from the tech cabinet. The official opening day will have kids soldering solar robotic bugs, according to Niedzwiadek.

“We’re just trying to keep things kind of flexible,” Niedzwiadek says. “We’re providing these things but we want to see how [the teens] are gonna use it … But we had this like, little closet of a space before, so I think the new teens are gonna get really attached to the space.”

Thirteen-year-old Hagan Delaney from Longmont High School comes to the space about once a week and enjoys the brand new look and feel of the room above everything else.

“I would go everyday if I could,” Delaney says. “Recently I’ve been helping Crystal make a movie about [the teen space] but normally I just hang out with some of my friends and use the computers and play Wii.”

Delaney said he’ll be using The Foundry’s sound recording equipment and green screens to make more videos in the future, and the 3D printer for any cool designs he thinks up.

The MakerBot 3D Printer gives off the noise of a loud regular printer mixed with an overlay of R2D2 noises, fittingly enough. The lab’s 3D modeling software (Scultptris) generates .STL or .OBJ files that can then be transferred to the printer via USB, according to Watts. The printer uses a sturdy biodegradable plastic called polyactide, or PLA, which can be formed into objects no larger than 25.2 centimeters long, 19.9 centimeters wide and 15 centimeters high.

On the Tuesday before the unveiling, while the printer was still unavailable for use, kids used the computers and work stations before eating pizza and watching the movie Coraline for the library’s summer film series, Teen Film Nexus. The teens said they would use The Foundry for special effects software and the printer to make things like jewelry and fossil replicas.

Though it’s just teens that have access right now, the library is aiming to expand 3D printing access to the general public as well, but further down the road, once things are established. Reservations should be available starting in September. Those using it will be charged by the gram, according to Watts.

“Whether it be sculptural, or if they want to replace a broken part on an appliance, or just create a machine in general, it’s a third dimension in terms of creation,” Watts said.

And while at the library, 3D printing enthusiasts will also be able to check out a book, if they’re still into being retro.