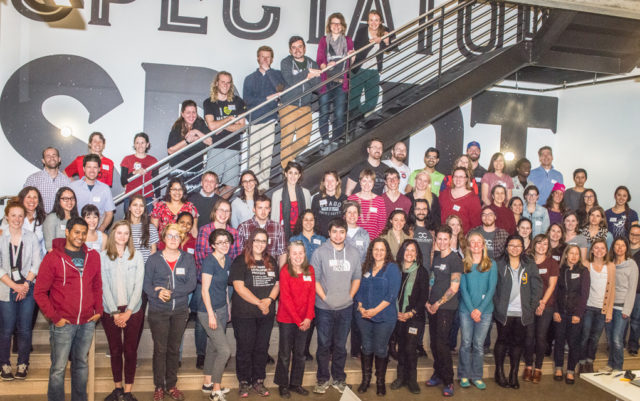 Farah is a 5-year-old girl who has been living in a Syrian refugee camp with her widowed mother and eight siblings since early 2016, when a bomb destroyed her home, killing her father.

Arin was still in the womb when her mother, Huda, and 2-year-old sister, Hiba, fled their home in Shingal, Iraq, following an ISIS attack. Arin’s father, who stayed behind to defend their city, hasn’t been heard from since. Arin, now 2, lives with her mother and sister in a camp near the border of Iraq and Syria.

Mahmoud, 10, works 60 hours a week at a tile factory with his father. In 2013, Mahmoud, his parents and his six siblings fled Syria and, after relocating several times, now live in Turkey. Though they have applied for asylum, they have yet to receive aid.

What with the crises in Syria and elsewhere, and the U.S. travel ban, there’s lots of talk about refugees these days. But some people are doing more than talking.

Farah, Arin, Mahmoud and hundreds of other refugees are featured on the Humanwire website (Humanwire.org), a nonprofit headquartered in Boulder with offices in Turkey, Lebanon, Iraq, Greece and Jordan, that connects displaced people with sponsors “one to one.”

There are currently 66 million displaced people in the world, 65 million of which will probably never find asylum, according to Andrew Baron, CEO and co-founder of Humanwire.

The power of Humanwire, said Baron, is that “you don’t have to bring somebody to America or another country, you can help them right where they are with resources and connections.”

On March 8, International Women’s Day, some of these resources were Boulder-area web and software developers, who gathered together for Refugee Hack Night to create programs for Humanwire and other NGOs addressing the mounting refugee crisis.

The main room of Galvanize’s Boulder campus was abuzz with conversation as nearly 70 volunteer developers — three-quarters of them women — split off into one of five groups, after polishing off a quick meal of tacos and cupcakes.

Over the next few hours, one group worked on designing a refugee news feed for NGOs; a second created a form for refugees to determine which countries were their best bets for asylum; a third team investigated the cheapest way to send money overseas; a fourth helped improve the donor checkout experience on the Humanwire website; and the last group tackled some challenges with collecting data on refugees, as outlined by the United Nations High Commissioner for Refugees.

Miller had met up with Kate Catlin, CEO of Flock — a career accelerator for women in technology — during their monthly craft night, or as Miller described it, “a bunch of ladies who do crafts, and are also leaders in tech … [who] basically plot to take over the world over wine.”

Miller and Catlin wanted to host a Hack Night, where techies come together to work on projects, but for a cause. So they teamed up with Katie O’Block, Events Manager for Galvanize — which provides technology education, as well as desk, office and startup incubation space — and enlisted the help of promotional partners to get the word out, including: Moms Who Code, Women in Machine Learning and Data Science, Women Who Code, Flatirons LGBTQ Tech Meetup, and Women Rising.

What was unusual about Refugee Hack Night was the fact that 75 percent of the participants were women, an exact reversal of the current ratio of women in the tech industry, according to the National Center for Women & Information Technology.

From a high of 36 percent in 1991, the percentage of women in tech is down to 25 percent, and falling. Further, Catlin pointed to statistics showing that 56 percent of women leave the industry 10 to 20 years into their careers. Even less represented in the field are Asian women (5 percent), African-American women (3 percent) and Latina women (1 percent).

Various factors are to blame for this “cycle of underrepresentation,” said Catlin, ranging from women reluctant to be the first and only woman at the office, to feeling uncomfortable in businesses that have “built cultures and practices and team behaviors around men.”

If Refugee Hack Night is any indication of the power of women in tech, then the decline in numbers is not only a huge loss for the industry, but for the world at large.

Luckily, folks such as Catlin, Miller, O’Block and the Refugee Hack Night volunteers are bucking the trend.