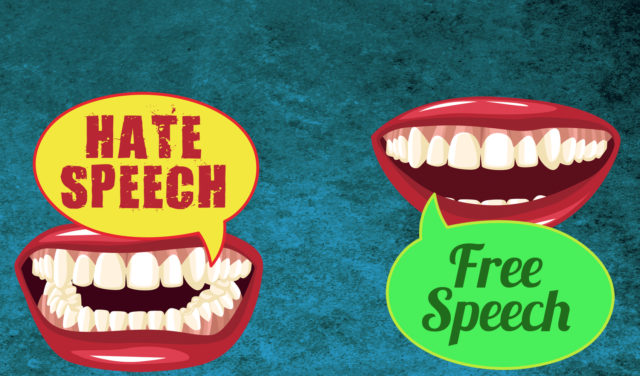 Free speech? Hate speech? Both? Neither?

Depending on who you talk to, all of the above were on display on Saturday, June 3 in downtown Boulder in front of the County Courthouse, where roughly 30 members of Proud Boys Colorado and the group’s supporters held a “Free Speech Rally.”

Penned in behind two rows of metal fences erected by the Boulder Police Department, the free speech ralliers waved American, “Don’t Tread On Me” and Trump flags. They also held signs reading “Muh Feelings!” and “Working Class Against AntiFa.” Outside the fences, a far larger crowd of around 250 gathered, made up of those protesting the Proud Boys, those voicing their support, and others just curious about what was going on.

The scene was loud and chaotic, with people yelling, chanting, beating buckets and drums, and setting off smoke bombs. About 25 members of the Boulder Police Department and other law enforcement agencies were on the scene, including some in riot gear who brandished pepper spray and what appeared to be pepper ball guns, which shoot projectiles filled with a powdered form of pepper spray.

One protester was arrested for throwing a firecracker and several more were detained by police per media accounts.

Who are the Proud Boys?

The organizer of the rally, Proud Boys Colorado, is a chapter of the national Proud Boys organization, which was formed in 2016 by writer, comedian and co-founder of Vice Media, Gavin McInnes. According to Proud Boy Magazine, the Proud Boys are a “fraternal organization of Western chauvinists who will no longer apologize for creating the modern world.”

J, a Proud Boys Colorado member from Denver, defines Western chauvinism as being “prideful [of] the great things that have been achieved through Western culture.” For instance, J points out that it’s Western countries that have “led the charge when it comes to gay rights.”

Proud Boys support some traditionally right-wing positions such as “minimal government,” closed borders and gun rights, while also championing libertarian views like opposition to the “drug war” and taking a stand against political correctness.

Despite their political stances, Proud Boy Vince Hubbard of Elizabeth says, “We’re more like the Shriners or the Knights of Columbus than a political organization. We are mostly about cracking cold ones with the boys.”

While not a member of Proud Boys, Denver resident Martin Meyers, 27, joined the group behind the barricades to advocate for the “promotion of liberty, for people to be able to say what they want.”

Dressed in a Trump T-shirt, Jennifer Archer, 31, from Louisville, stood with the Proud Boys to show “solidarity for free speech” and to express her concerns about illegal immigration.

Mingling with the larger crowd outside the fences in a “Make America Great Again” hat, G, a 27-year-old Boulderite, says he supports the right to free speech, and voted for Trump as a “gigantic middle finger to [Washington,] D.C.” He says he voted for Barack Obama in previous elections for the same reason.

Tyler, 27, from Denver, attended the rally in support of “allowing people to say what they want.” He sees this and similar free speech events popping up across the U.S. as a backlash to events in Berkeley, California, in February and April, where protests from the political left — some of which turned violent — compelled conservative speakers Ann Coulter and Milo Yiannopoulos to cancel speaking engagements.

Though the rally was billed as promoting free speech, not everyone buys that claim.

A flyer circulated by the People’s Protection League and the Front Range Socialist Party maintained that groups such as the Proud Boys use free speech to “conceal their intentions to people who do not know who they are or know about their violent goals.”

“Free speech is code for the normalization of far right organizing and violence in public discourse,” read the flyer.

“I do not think hate speech should be free speech,” says B, a 30-year-old resident of Longmont and member of AntiFa, a loosely knit international movement opposed to fascism. Like a dozen or so other protesters at the rally, B dressed in black with a bandana covering the lower half of his face to hide his identity.

AntiFa tends to be comprised of leftist anarchists who often view themselves as the polar opposite of white nationalists, white supremacist or alt-right groups.

“If you read the Constitution, free speech is what the government will or will not allow, it has nothing to do with people versus people,” says B. “Even if it is free speech, we don’t have to stand out here and take it.”

Kyle Newbrough, 23, from Boulder, believes the concept of hate speech is all too often used to silence opposing viewpoints. “You can’t say that just because I say something that makes you feel bad, that that’s illegal.”

Yet the People’s Protection League and the Front Range Socialist Party have a different take, with their flyer insisting that “speech is inseparable from action and organization.”

“I think that they have a right to be here,” says Kaila Spencer, 27, from Boulder. While not a supporter of the Proud Boys, she says, “freedom of speech is allowed for everyone. But once that starts to harm other people…”

In one sense, those opposed to the Proud Boys and their supporters communicating their message accomplished their goal, in that it was nearly impossible for attendees to hear them over the noise of protesters. While this was a relief to some in the crowd, a number of locals were disappointed that they didn’t get a chance to listen to what the organizers had to say.

Eighty-five-year-old retired Boulder high school teacher, Jacqui Goeldner, has lived in Boulder for 50 years. As a Bernie Sanders supporter, she assumes her politics don’t align much with the Proud Boys. Still, she wanted to find out what they stood for in hopes of starting some sort of dialogue. “This was an opportunity for communication,” she says. “An opportunity that we missed.”

Boulder’s David Rosdeitcher, aka street performer Zip Code Man, says that while his own politics are “not on the spectrum,” he’s curious about the Proud Boys’ take on things. “They have a point of view and you might be surprised … that you might agree with them.”

Tanya, in her mid-40s, lives in the Boulder area and says she’d like the Proud Boys to be given the opportunity to speak so as to expose their agenda. “Once they show what they are to the town,” she says, “more people are going to reject them.”

Do the Proud Boys have a Neo-Nazi, white supremacist, and/or fascist bent or not?

The People’s Protection League and Front Range Socialist Party flyer contended that groups such as the Proud Boys organize in order to “spread their hateful ideology” and “incite violence with their thinly veiled white-supremacist views.”

Recently in Colorado Springs, the Colorado Springs Anti-Fascists hung up flyers with the name, address and photo of a member of Proud Boys Colorado under the heading “Our Neighbor is a Fascist.”

The poster read, “We can’t say decisively that [the individual] holds racist, anti-semitic, homophobic, or misogynist views, but he has chosen to affiliate himself with an organization that does, and should be considered a danger to the community.”

Ethan Au Green, 37, of Boulder, thinks the Proud Boys and their supporters are a “mix of Nazis, fascists, white supremacists and Trump supporters. … I don’t know if they all share the same identity, but they surely keep company with each other, which implicates them all with the worst noxious ideologies present in their group.”

Yet the Proud Boys say their support for “Western chauvinism” is about culture, not race, which is why they have adopted “anti-racism” as one of their main tenets.

“We aren’t racists. Period,” says Proud Boy Vince Hubbard. “If we were racists, we wouldn’t have people from other races in our group.”

Proud Boy J adds that, “we have had tons of people contact us looking to join up with our group, many of [whom] are minorities who heard about the rally through some of the lies being pushed about it.”

A handful of individuals thought to espouse pro-fascist and white-supremacist views did attend the rally, one of whom wore a “Proud to Be a Fascist” T-shirt. A YouTube video is circulating of a Proud Boy confronting this individual, saying, “As Proud Boys we do not believe in fascism. We do not appreciate you coming out here. If I would’ve known you were coming out here, I would’ve told the police not to let you up here.”

Minutes after the confrontation, the Proud Boys disbanded the rally. Proud Boy supporter Jennifer Archer admits that the arrival of these folks was the reason organizers ended the rally early. “We don’t want to be associated with that kind of thing,” she says.

Asked whether he supports violence against the Proud Boys, AntiFa member B says, “I actually do.”

“Their ideology is violence. Against my family, against other families, against my neighbors and my community,” says B. “So I don’t think we should just sit around and wait.”

“The new political spectrum is freedom to authoritarianism,” says Proud Boy supporter Martin Meyers. He says AntiFa and other anti-fascist groups “lean heavy towards authoritarianism, because they want people to be controlled. That’s really their ultimate goal. They want their ideology to impose itself on everyone else, while we want people to be free to do what they want.”

While concerned about racism in the community, Boulder resident C.T. Hutt, 34, is neither a proponent of Proud Boys nor AntiFa. Standing quietly by himself throughout much of the rally, he says he was there simply to “keep calm and bear witness.”

Hutt doesn’t believe violence will accomplish anything worthwhile for either side, but will only exacerbate the conflict. “Anger,” he says, “breeds anger.”

The views of those behind the barriers and those protesting in front of them make it clear that in the era of Trump, free speech is up for debate. An increasing number of folks on the left seem unwilling to view speech they perceive to be masking hate and discrimination as protected. And those on the right claim that it is most often the left these days who use violence to impose censorship on the political speech of those who see themselves as pro-white or pro-American rather than anti anyone else.

And lastly, there are those of all political stripes who still believe free speech is more important than anything that might be said and allowing all viewpoints, no matter how repugnant to others, is always better than forcing silence on anyone.

Hate speech is controversial because the line our words must cross to be considered such is drawn in a different place by each of us. Hate speech to one group is simply patriotic free speech to another.

What is certain is that limiting anyone’s speech today will nearly always lead to someone else’s speech being limited tomorrow. Thanks to the current political environment, that is a lesson Boulder County residents will be learning one way or another over the next few years.