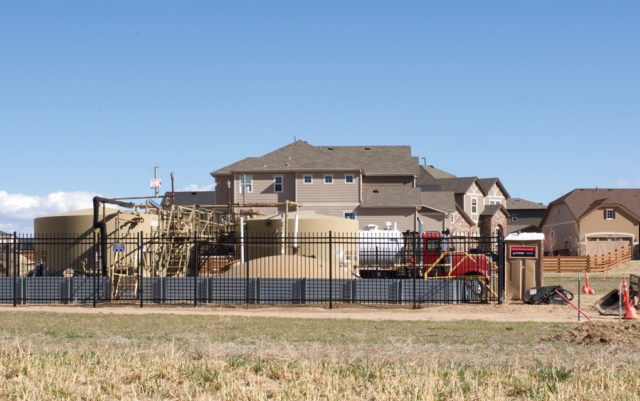 Last November, Colorado voters passed Amendment 71, a controversial constitutional amendment aimed at making it more difficult for citizens to amend the state constitution. But on March 27, a federal judge ruled that part of the new law violates the 14th Amendment of the U.S. Constitution and barred the state from enforcing it.

Citizens’ initiatives have shaped the state of Colorado throughout its history. The process has given Colorado some of its most iconic laws from both sides of the political spectrum — including the Taxpayer Bill of Rights (TABOR) and Amendment 64, which legalized recreational marijuana.

Before Amendment 71, efforts to place a constitutional amendment on the state ballot needed support from 5 percent of the population who voted in the last secretary of state election, or roughly 100,000 valid petition signatures. If successful, voters would decide at the ballot box with a simple majority whether or not to change the state constitution. Amendment 71, however, changed all that. It requires a 55 percent supermajority voter approval on any constitutional amendment and it has a geographic requirement clause, requiring a citizen’s initiated ballot measure to collect signatures from at least 2 percent of the population from each of the state’s 35 senate districts.

Dubbed “Raise the Bar,” the initiative was brought forth by people who claim it’s too easy to change the state constitution, but soon after it passed, groups and individuals behind Amendment 69, the failed 2016 universal health care initiative, challenged the Amendment’s geographic requirement in federal court.

“Anyone who says that it’s too easy to get a citizens’ initiative to amend our constitution hasn’t tried to do that,” says Bill Semple of Boulder, an individual plaintiff in the case. “It is a very daunting process.”

Efforts to pass universal health care attempted to get a ballot measure through the state legislature three different times before going the citizens’ initiative route, he says.

“There are times when wealthy and powerful interests will really own legislatures, so citizens needed another route to get things on the ballot so that democracy can work,” Semple says. “Unfortunately, what Amendment 71 did is it put [citizen-initiated constitutional amendments] out of reach of grassroots organizations. It does the opposite of what the citizens’ initiative process was intended for.”

Judge William J. Martinez ruled that the geographic requirement violates the “one person, one vote” principle inherent in the Equal Protection Clause of the 14th Amendment because voter population varies widely between state senate districts.

Registered voter population can range as much as 60 percent between districts, the case claims, making signature gathering proportionately more difficult in different parts of the state. For example, in order to comply with Amendment 71, an effort would need 2,644 signatures from district 23 which stretches along the I-25 corridor from Broomfield to Fort Collins, but only 1,609 signatures from district 21 which encompasses the North Metro Area from Eastern Arvada to Commerce City.

“Thus it is unconstitutional unless it can reshape its senate districts to roughly equal total and registered voting populations,” Judge Martinez writes in the ruling; an almost impossible task, he admits. He then permanently prohibited the state from enforcing the geographic requirement.

“It’s a real victory for the citizens of Colorado,” Semple says.

The Secretary of State’s office, however, maintains that Amendment 71 is constitutional and the Attorney General filed an appeal in the 10th District on March 29 asking that the higher court  halt Judge Martinez’ injunction until it can review his decision.

“We have a constitutional obligation to defend the laws, whether they are in the constitution or the statutes, whether they’re passed by a vote of the people or passed by the legislature,” Suzanne Staiert, Deputy Secretary of State, says. “Whether or not we may agree philosophically is not something that we consider.”

Eight different citizens’ initiatives have been submitted already, with a few more expected by the end of the week. The final day to file citizens’ initiatives for the 2018 ballot is Friday, April 6. From there, groups have roughly six months to gather the necessary number of signatures to make the ballot this November.

Grassroots groups estimate it would cost at least three times as much if not more to get enough signatures for a ballot initiative under the geographic requirements in Amendment 71, leaving only corporate interests or the wealthiest citizens with the ability to change laws, they argue. Additionally, the geographic requirements could allow one senate district to effectively veto any effort for a citizens’ initiative.

Judge Martinez’ ruling is “definitely a good day for democracy and for grassroots direct democracy in particular,” says Micah Parkin, board member at Colorado Rising, the grassroots group behind several recent failed attempts to get constitutional amendments on the ballot that would limit oil and gas development in neighborhoods and increase oil and gas setbacks.

“Trying to stop us from limiting neighborhood fracking was a huge part of the intent of 71 and why oil and gas companies were by far the largest source of funding for that initiative,” Parkin says.

According to Clean Slate Now, a Denver-based nonpartisan organization dedicated to campaign funding reform, 92 percent of the $28 million behind Amendment 71 came from the oil and gas industry.

In 2018, Colorado Rising is trying to place a statutory amendment on the ballot, as opposed to a constitutional amendment, mainly due to the passage of Amendment 71.

“We would have preferred to run a constitutional ballot initiative but with the passage of Amendment 71, gathering signatures from 2 percent from every senate district would have been [prohibitively] expensive,” Parkin says.

The proposed statutory amendment would create 2,500-foot buffer zones or setbacks between oil and gas development and occupied areas such as homes, schools, playgrounds and drinking water sources.

The provisions of Amendment 71 do not apply to statutory amendments. However, these laws are subject to legislative oversight and the Colorado Statehouse (both the house and the senate), with support from the Governor’s office, could vote to throw out a statutory amendment. Given growing support for the proposed setbacks, Parkin says, Colorado Rising is confident that wouldn’t happen.

“We don’t believe that all three of those bodies would defy the public will once the Colorado Rising initiative passes,” she says.

“Boulder County didn’t support Amendment 71 because we want citizens to be able to put issues on the ballot which would give local governments more local control over oil and gas,” says David Hughes, Deputy County Attorney. “We support the district court’s decision in the case. And the County will support the decision if it can, through amicus briefs or otherwise in the 10th Circuit.”

Sixty-three percent of voters in Boulder County opposed Amendment 71, despite its passing with 55.56 percent of the statewide vote.