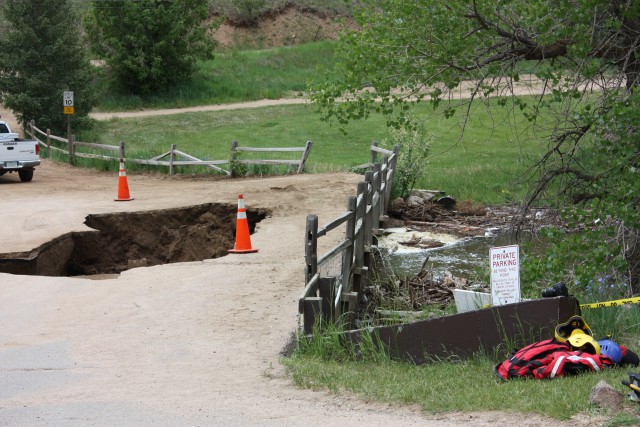 Christina Mueller says the three weddings scheduled at the
Red Lion Inn for this weekend will move forward whether there’s a bridge in
place over Boulder Creek or not.

Mueller, 43, works as the manager at the Boulder landmark
and is the daughter of Chris and Heidi Mueller, who’ve owned the restaurant for
almost 50 years. She says her family’s business has already lost an estimated
$100,000 in revenue since the collapse of the bridge that carried visitors
across Boulder Creek to their establishment and that they can’t afford to lose
more, particularly given that they’re going to foot the cost of rebuilding the
privately owned bridge themselves.

The bridge, which was the only easy way to reach the
property, washed out on Tuesday, June 1, after water levels in Boulder Creek
rose due to heavy rain. The only other route to the restaurant — and the homes
behind it, where an estimated 20 tenants live — is Chapman Drive, an unpaved
single-lane road part of which is private and part of which belongs to City of
Boulder Open Space and Mountain Parks (OSMP).

The city has declared their portion of Chapman Drive off
limits to restaurant patrons and the general public for safety reasons, and
although they are allowing residents to use the road, they initially said they
would lock the access gate to Chapman Road and give keys only to residents who
signed liability waivers. When residents objected, the city backed off the
demand for the waivers and opted instead to have OSMP rangers patrol the road.

Though Mueller had great praise for Boulder County’s efforts
to help speed along the necessary permits so the business can at least host the
weddings that are such an integral part of its annual budget, she was critical
of city staff and their decisions regarding Chapman Road.

For her and her parents, whose lives have gone into operating
the Red Lion Inn, it feels like almost 50 years of dreams and hard work is
hanging by a thread, not to mention the livelihood of their 40 or so employees.

But city officials say their only concern is for public
safety.

The trouble began last Monday, June 7, when Mueller says she
saw debris building up against the bridge in the Colorado Department of
Transportation’s right of way, which extends partway through the Boulder Creek.
She says she called CDOT, but by the time CDOT responded, the bridge had
partially collapsed and had to be removed in order to prevent a sudden washout
that might have caused flooding downstream.

“It’s like they tore the bridge down and deserted us,”
Mueller says.

That afternoon, the city contacted the Muellers to tell them
that Chapman Drive would not be safe for restaurant patrons, and she asked the
city to reconsider that decision. The city sent out a risk-assessment team on
Wednesday, which, armed with an engineering report from September 2009 calling
the road unsafe for anything other than emergency travel, came to the
conclusion that the road should not be opened for restaurant traffic.

When the city listed the problems it saw with Chapman road —
including hairpin turns, lack of guardrails and the need for four-wheel drive
vehicles — Mueller says she tried to meet each one of those concerns with a
solution, including adding guardrails and having wedding parties brought in by
a professional shuttle service using four-wheel drive vehicles but was
rejected.

“The city refused to let us make any improvements to the
road,” she says. “Every time they brought up a concern, I had an answer for it,
but [the city] shut it down.”

As someone who periodically travels Chapman Drive, she is
mystified that city officials find it so unsafe. She says there are more
hairpin turns on Flagstaff and that, with the addition of cyclists, she feels
that driving Flagstaff or Boulder Canyon can sometimes be more dangerous.

She recalls a time in the late 1990s when weeks of rain
caused a mudslide on Flagstaff Mountain and part of Flagstaff Road collapsed.
Residents opened up the private portion of Chapman Road so that Flagstaff
residents and others would have a means to travel up and down the mountain.
Among the vehicles that made use of Chapman Drive during that time were school
buses.

“Chapman Drive was safe enough when it was convenient for
the city and the county to use it,” Mueller says, adding that safety is
important to her, too. “I don’t want anyone to get hurt. I don’t want any of my
brides to die on her wedding day.”

She says that many of the brides hoping to celebrate their
weddings at the Red Lion Inn have been working with her for more than a year.
When five weddings were cancelled over the weekend of June 12-13, the Inn went
so far as to donate linens and other supplies that the brides had been
counting on, even though the Inn lost the revenue.

“We gave the food away,” she says of meals that had already
been made.

Because the Inn brings in big bridal parties, which means
sales for hotels, other restaurants and floral shops — not to mention about
$100,000 in sales tax revenues each year — she feels the city ought to have
done more to find a way to get guests over Chapman Drive safely to the Inn.

She believes the city’s lack of interest in pursuing some
other solution for the use of Chapman Drive indicates that the city has an
anti-business bias and was particularly critical of City Manager Jane Brautigam
for failing to talk with her in person and for not being willing to find a
compromise.

“I think that in a recession for Boulder to be anti-business
is amazing,” she says. “Maybe I’m just mad because my parents worked their
fingers to the bone.”

The Muellers bought the business, which was established in
1870, in 1963 and have owned and operated it ever since.

But Patrick von Keyserling, communication manager, says the
city sees this as a potential life-or-death issue. He says Brautigam wasn’t
available to speak to Mueller because she was busy with other matters.

“The Emergency Operations Center was activated to deal with
the flood, and we were in Flood Mode II, so the City Manager was actually
dealing with flood modes, as opposed to talking to the restaurant,” he says.

Von Keyserling couldn’t say why school buses had once been
allowed to drive on a road now deemed so dangerous, and no one was available in
the risk-assessment office who’d worked for the city at that time. However, he
speculates that the road was in better condition then.

He cites a September 2009 engineering report stating that
the road was unsafe for public travel and should be used only for emergency
vehicles until it can be repaired. The report also states that an increase in
traffic would make the road deteriorate more quickly.

Because the road was designated a historical landmark in
January 2010, just a few months later, all repairs to the road must now be
repaired in a way that is historically correct, he says. That precludes allowing
residents to make those repairs themselves.

Historical features on the road include a stone bridge and
retaining walls built by the Civilian Conservation Corps, which built a number
of the features on Flagstaff Mountain, as well.

Von Keyserling said the estimated cost to the city to bring
Chapman Road up to safety standards is $230,000. He said the city plans to
begin applying for state grant money to make needed repairs in April 2011, when
grant funds are available again.

But those repairs will be made long after this year’s
wedding season has passed. And for Mueller, her employees and the brides who hope
to marry at the Red Lion, this presents a crisis. Last weekend’s cancellations
alone cost the business $30,000, losses passed on to employees who aren’t
working and who are now going to struggle to pay rent. One bride ended up
paying an additional $10,000 to have her wedding hosted elsewhere.

Other brides were luckier.

“I definitely want to thank all the venues who hosted my
brides,” Mueller says. “This weekend it was a catering company, Savory Cuisine,
the Boulder Mountain Lodge, the Boulder Country Club — they all hosted my
weddings and matched my price.”

Mueller says she personally worked at three of the weddings,
and her chef worked two of them, trying to give the brides the experience they
had worked to achieve at the Red Lion Inn.

Further loss of revenue means that the Red Lion Inn might be
forced to close, and that, Mueller says, would be a tragedy, not just for her
family but for others in the community, as well.

“It’s not just another place going out of business in
Boulder,” she says, “it’s a bit of history.”