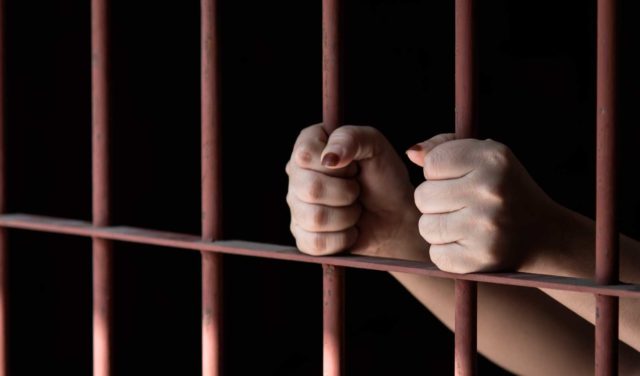 Jen Perry makes belts. But not just any belts. The University of Colorado graduate’s Jelt Belts are made from recycled plastic bottles, the buckle contains no metal so it can be worn through metal detectors at airports, and they’re fun, with funky colors that match any mood and style.

But perhaps most importantly, Jelt Belts are not manufactured in China, where so many of Perry’s competitors produce their goods. They’re made in a lonely, barbed wire shrouded outpost in Billings, Montana. The wire isn’t there to keep her competitors’ prying eyes away. Rather, it’s there to keep her workforce inside the facility — the Montana Women’s Prison.

Prison labor isn’t new, as anyone who has watched movie classics like Cool Hand Luke or The Shawshank Redemption, where prisoners labored under hot sun with bloodhounds and armed guards standing watch, knows. However, what’s different about the work at the Montana Women’s Prison and the production of Jelt Belts is that the work is part of a rehabilitation and education program that changes lives and attitudes in profound ways. The inmates are paid, the activity provides a vessel for empowerment and, ideally, a successful re-entry into society. And, with female incarceration increasing rapidly across the nation over the past few decades, Perry is on the forefront of rehabilitative efforts that could change recidivism outcomes.

Statistics relating to female incarceration tell a troubling story. Women’s state prison populations have grown 834 percent over the past four decades across the United States, more than double the pace of growth for male inmates, which grew by 367 percent nationwide from 1978 to 2015.

For law enforcement agencies and the criminal justice system, female inmates in Colorado and across the country provide unique challenges. According to research by the Prison Policy Initiative, a nonprofit, non-partisan organization that focuses on mass incarceration, 62 percent of female inmates are mothers of minor children and are also more likely to be the primary caretakers. The resulting challenges in the event of even short-term incarceration of these mothers are many and acute, and in the most extreme cases include the complete severing of family ties as children are placed in permanent foster homes.

Sadly, incarceration is only the first hurdle for female inmates. “Women with a history of incarceration face particularly daunting obstacles when they return to their communities,” says Wendy Sawyer, a senior policy analyst at the Prison Policy Initiative.

“Even before they are incarcerated, women in prison earn less than men in prison, and earn less than non-incarcerated women of the same age and race. Women’s prisons do not meet the need or demand for vocational and educational program opportunities. And once released, the collateral consequences of incarceration make finding work, housing and financial support even more difficult,” Sawyer adds.

This, of course, is where Perry comes in.

“In the beginning [of Jelt Belts] everything was made in China, because there was nowhere I could make belts in the U.S.A.,” Perry says. “But I didn’t feel good about that.”

So she re-imagined production and supply chains, while tapping into an unlikely workforce.

Today the raw goods for Jelt’s products are shipped to the Montana Women’s Prison, and while the prison is run by the state, “there is a volunteer program where inmates apply, interview and then are trained if they get the job,” Perry says, noting that for any inmate, participation in work programs is by choice, and employment or other forms of labor during incarceration are not mandated by the authorities. Oversight of the program, Perry says, is managed by employees of the prison’s Industries Program, which, in addition to providing training and supervision, also helps inmates secure jobs at the end of their sentences.

“The base rate is $1.50 per unit,” says Perry, who notes that it’s the same compensation that Jelt pays to other independent contractors. Perry says inmates can manufacture approximately 25 units per hour and earned wages are allocated to restitution, child support and, finally, into a savings account that inmates have access to upon release.

“The prison has manufacturing and sewing facilities, and it took me about a year and half to get it organized,” Perry adds. “Every step is monitored, and quality control has to be really tight to get the ‘Made in Montana’ stamp. We also didn’t want anything bad to happen, or the women to get hurt.”

Perry says the decision to manufacture Jelt Belts in Billings is one of the best she’s ever made.

“The women take it really seriously, they get paid, and we pay them the most of any project they can do while incarcerated,” Perry says. “The money they earn goes to restitution, child support and to save. Most of them are mothers, and most of them are going to be released. How do you want them to feel when they are released? You want them empowered, and with job skills they are 30 percent less likely to re-offend.”

“I think that it makes a huge difference in the level of confidence that inmates have when they leave here,” adds Esther Weis, who oversees Jelt’s production at the correctional facility in Billings along with several other work programs in the prison. “A lot of women leave with a different mindset [from when they came in].”

Part of the mental reset, Weis says, comes from simple things: taking pride in the work, feeling responsible and earning enough to not only pay your debt to society and support your children but also to save something extra for when it’s time to go home. These may seem like small, normal and ordinary things to those on the outside, but to an inmate who has never been through an interview process or held a job, this process, and the skills learned, can be a life-changing affirmation that they as an individual and as a human have value — that they can be productive.

“I think what happens when they start, it’s like my 15-year-old son who is washing dishes and says, ‘This sucks,’” laughs Perry. “But this is what you have to do, you have to have a job and you have to show up and eventually you get a sense of satisfaction from being part of the chain of commerce, instead of being a drain. Everyone needs that. Some of these people have never experienced working. They’ve had a rough start to their lives in terrible circumstances.”

This hunger for success that Perry sees in the female inmates in Montana isn’t unique to Billings. In Colorado, “female offenders tend to be more likely to take advantage of programs and to be more highly engaged in them,” says Adrienne L. Jacobson, associate director for legal services and acting public information officer for the Colorado Department of Corrections.

“Female offenders are more likely to self-advocate and are motivated and excited to learn,” Jacobson adds when queried about how the female prison population differs from their male peers. “Female offenders feel a sense of accomplishment in completion of a class and are excited to excel. They are interested in earning college credit, receiving achievement earned time upon completion, and being prepared for life after release.”

While there are currently no other brands in the Centennial State that are involved in the corrections environment in the way that Jelt Belts is in Montana, Jacobson says that demand for educational, technical and career classes is strong, and wait-lists are common.

And, Jacobson says, there is education available to accommodate a wide variety of skills and interests: graphic design, cosmetology, culinary arts, welding, carpentry, HVAC, and electronic engineering to name a few. Women can also earn their GED.

Plus, the skills learned by women during their time in prison can be put to use immediately upon release, Jacobson adds.

“Female offenders are able to video interview with employers open to hiring former offenders,” Jacobson says. “In some cases, offenders are pre-hired and can then count on having a job waiting for them upon release.”

For Jacobson, the combination of education and training while incarcerated, along with a focus on having the skills and training to succeed upon release, are part of an overall system where inmates are empowered to put their crimes behind them and enter a future that’s brighter than their pasts.

“Partnering with community resources allows offenders to build relationships that extend beyond the prison walls and provide them with necessary support on the outside,” Jacobson says. “The Department of Corrections is committed to providing as many educational, vocational and other programmatic opportunities as possible to our female and male populations in order to better prepare them for re-entry.”

The ultimate goal, Jacobson adds, is “creating a more normal transition environment for our offenders.”

“It’s not easy,” Perry adds. “Some of these people have never worked.”

But the process of learning to work and ultimately learning to appreciate work can be incredibly powerful, she adds.

“At one point someone said, ‘I’d rather work at McDonald’s than this,’” Perry says with a laugh.

“What happened as she started doing it more, it turns out that she loves it and she now directs our whole project. We’ve all learned that work by definition sucks, but we have to work, and when you work, you get a sense of pride and satisfaction when you create something awesome.

“She is so proud of what she’s doing now.”