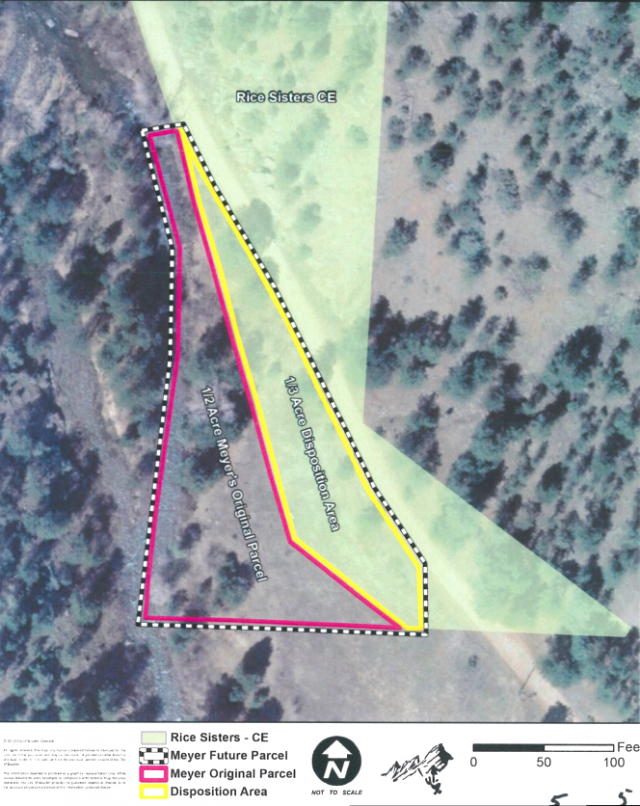 Courtesy of City of Boulder Open Space Board of Trustees

This house will stun. A 1,634-square-foot home with decorative entryway trusses, stucco and stone siding, solar panels affixed just so, a large patio for summer evenings. Nestled under the cold shadow of Eldorado Mountain, set as a downy cub onto what was a meadow (mama nearby), the loony babbling of South Boulder Creek, rare butterflies humbly batting false eyes. No public road leads here. You’d almost think it was protected by the City of Boulder.

Well, it was. But after seven years of litigation, board hearings, applications and angry neighbors, a conservation easement has been lifted, property lines have been redrawn and building exemptions have been made for that house to be built in that meadow.

In 2008, Charles Myers and his wife Barbara bought an empty halfacre parcel of land from Denise Koenig right beside the Rice property and the conservation easement. As it was, the parcel of land was “very small” and “it may not be able to meet setbacks” for building, county Planner Denise Grimm wrote to Koenig in 1996. It was also potentially in a floodplain and may not have legal access, Grimm wrote. The parcel was shaped like a fat boomerang, causing logistical building and access problems. It was also part of a Habitat Conservation Area as designated by the city of Boulder, which is meant to protect land and wildlife from human interference — and in this instance, meant to prohibit road access, according to the Open Space Board of Trustees.

With this knowledge available, the Myers bought the lot anyway. They then filed lawsuits directed at all their new neighbors, the City of Boulder, the City and County of Denver (which has a right of way water easement on the property), and others, claiming that the original boundary lines of the property were different and that there wasn’t adequate access to the property. Myers showed extensive lines of deed transfers and claimed that the lawsuits would also help sculpt vague property lines.

“I contend that such boundary clarification is not an enlargement of our lot but an agreement as to what the lot lines of all affected properties (not just ours) actually are,” Charles Myers later wrote to the County Commissioners in 2013.

Myers added that “a transcription error” in the previous chain of ownership created confusion about whose land was whose and referenced a 1991 letter between two previous land owners — the Rice and the Koenig forbearers — saying they needed their “mutual boundaries cleared up” for title reasons.

(Myers did not respond to multiple emails or calls from Boulder Weekly for this article.)

At last, the lawsuits continued and focused sharply on the Rice sisters. Eventually, they settled and sold a third of an acre to the Myers — that parcel essentially filled in the fat boomerang shape of the original Myers property to create a wonky trapezoid of land.

“He sued us because there was some access issues with the parcel,” Jenna Rice says. “It didn’t already come with access to it and we didn’t think it was the best area to develop, so we were hesitant to give access. It’s a floodplain and not an ideal location, so we settled in a mediated settlement.”

However, the Myers’ new land was still under the conservation easement owned by the City of Boulder. In order to build on their new trapezoid, the Myers would need to get that easement lifted.

In May 2011, the Boulder Open Space Board of Trustees decided to do just that. Property Agent John D’Amico presented the issue to the board saying, “everyone would go back to litigation and a judge would make the decisions” if they did not decide on the issue in a very timely manner (as mandated by the Rice-Myers settlement). City Attorney Deb Kalish said, “Other property owners in the area would be drawn into litigation and would acquire additional attorney’s fees” if the board did not approve the disposition (or relinquishment) of the conservation easement on Myers’ property.

The board was particularly sensitive to any further litigation costs the Rice sisters would incur.

“We’d already been over two or three years in this kind of litigation and it was definitely costing us a lot of money, and we thought if we went to court he would gain access of some sort [regardless],” Rice says. “We were hoping the city was still going to keep the conservation easement on it. At the last minute they decided not to.”

Ultimately, the board lamented that there were time constraints on making the decision. Board President Pat Billig asked if the disposition would set a precedent. The board members agreed that it wouldn’t and the conservation easement disposition was unanimously approved.

Then last week, the Board of County Commissioners was presented with the site plan and a subdivision exemption for the Myers lot. The subdivision exemption request was brought forward by the Myers to enable them to build on the totality of their land — the original parcel and the addition that had had the conservation easement lifted.

D’Amico wrote to the county attorney in March 2013 that the city had tried numerous times to settle the case with Myers and offered access to the property while keeping the conservation easement in place. Myers denied these offers because, D’Amico says, “[Myers’] intent was to increase the building lot in order to build a larger house.”

D’Amico added, “The city feels the approximately 0.36 acres should be used to determine the appropriate development” and not the additional land the Myers bought.

The Board “reluctantly” approved the exemption. Commissioner Elise Jones spoke at length about how the commissioners could only approve what was in front of them — no matter how it got there — and that they had to act in accordance with the law. The subdivision exemption increased the buildable land from 0.39 acres to 0.88 acres. (Myers did downsize some house aspects to meet county requirements.)

Lastly, county code dictates, “A boundary line adjustment shall not be approved solely for the convenience of construction.” But county planner Hannah Hippely judged that the boundary line adjustment was not solely for construction because the original lot was suitable for construction and that the “development proposed here has not changed significantly from the 2007 Site Plan Review application.” This is despite the fact that it wasn’t until 2009 that Myers bought the additional land from the Rice sisters on which the new house will be built — the 2007 application was based on land the Myers did not yet own and thus was not approved.

Hippely also argued the new boundary will help set the house away from the river nearby and that it will help the property gain access to the road — neither of which, according to Hippely, are for the sole purpose of aiding construction.

Now with building poised to begin, neighbor Neil Blank — who was the target of Myers’ previous litigation — said the whole easement is compromised.

“In wildfire, it’s a mitigation across boundaries,” Blank, a lifelong member of the fire department, says. “It doesn’t matter if you’re Boulder County or Jefferson County, one landowner or another. You work geographically across areas and ultimately, that’s how conservation easements work, too. Moving this little conservation easement has a domino effect.”