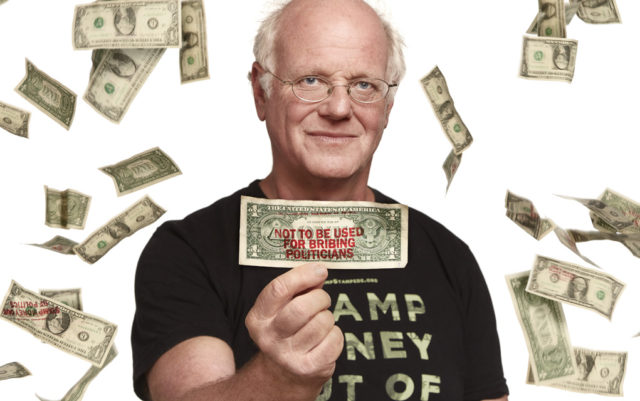 Ben Cohen is on a mission. Since 2013, the Ben & Jerry’s co-founder has been at the forefront of a national money-stamping campaign to rid U.S. politics of corporate influence.

Stamp Stampede is a soon-to-be 100,000-person-strong nonprofit seeking to raise the collective voice of average citizens, backed by research that found politicians are more likely to respond to the ultra-wealthy than the rest of their constituents.

In celebration of the 100,000th stamper signing onto the cause, Cohen will be on Pearl Street April 29, handing out free scoops of ice cream before giving a presentation and responding to questions at the Boulder Book Store.

“We want to get as many people as we can to join us in decorating their dollars, beautifying their bucks,” Cohen says.

Stamps range from $6.50-$20, and are engraved with a variety of sayings from “Stamp money out of politics,” and “Not to be used to buy elections,” to “Resist: ‘Voter Fraud is a Fraud,’” and “Corporations are not people.”

“We see them as two sides of the same coin, or dollar bill in our case. It’s about having our votes count,” Cohen says. “For people that can vote, our votes are getting drowned out by big money in politics. But there are a bunch of people in our country that are denied the opportunity to vote at all. It’s only when both of those wrongs are corrected that we will finally have the democracy that we’re supposed to have.”

The idea for Stamp Stampede has roots in the Occupy Wall Street protests of 2011, when a couple hundred protesters converged on New York City.

“Occupy Wall Street was incredibly successful and incredibly focused at the very beginning on the issue of economic disparity and the fact that most of the money generated over the last 10 to 20 years has gone to the top 1 percent,” says Cohen, who first arrived at the Zucotti Park protests in October 2011 with a van full of ice cream to feed the masses.

As the movement progressed, the focus became blurry and the singularity of intent was lost. Still, Cohen has remained on target, continuing to highlight the basic message of ridding politics of monied interests.

For Stamp Stampede, he looked to other legal money-stamping projects for inspiration, seeking to inject what has traditionally been a game of sorts with a social and political cause.

The concept is easy: Stamp a bill, enter the serial number on the website and then sit back and wait for someone to spot it. The website tracks stamped bill sightings through a leader board, which adds a bit of friendly competition to the campaign.

Until recently, Cohen was at the top, but in December of last year, Jerry Greenfield, the other half of the famed ice-cream duo, surpassed Cohen for the first time. Every time that happens, Cohen gets an automated email reminding him to keep stamping to regain top-dog status. “It’s horrible, but it is motivating,” Cohen says, with a laugh. “I end up having to buy lunches for the next week when Jerry and I go out with my stamped dollar bills.”

As of April 22, Cohen is in fifth place with 214 reported sightings of his stamped bills in 35 states, just behind Greenfield with 220.

Greenfield and Cohen started Ben & Jerry’s in 1978, growing from a small ice cream shop in Burlington, Vermont, into a multi-million dollar company the duo sold to Unilever in 2000 for approximately $326 million. Despite their personal success as businessmen, Cohen says he and Greenfield have never operated with a cutthroat businesses mentality that focuses on profit at the expense of people.

“That doesn’t give me any sense of joy, personally,” he says. “We have a belief in equity and economic justice and democracy. Maybe those things might be considered quaint, but we believe in them. We believe unless we work to preserve our democracy and return our country to the democracy it’s supposed to be, we’re all going to be nothing more than corporate pawns.”

The Stampede partners with other organizations working toward a constitutional amendment that would overturn the Citizens United decision. But doing so is quite the process, requiring a two-thirds vote by both houses of Congress, then ratification by three-fourths of the states.

Colorado was one of the first states to voice its opposition to the Citizens United decision, passing Amendment 65 in November 2012 with support of 74 percent of voters. Since then, 18 other states have also passed resolutions calling for a constitutional amendment to address campaign finance reform, as well as 800 other municipalities. The Stampede also claims roughly 200 members of Congress express support of the idea.

Additionally, the Stamp Stampede promotes a Voting Rights Advancement Act to combat the rise of voter suppression through recent voter ID laws and other discriminatory policies being passed around the country.

Momentum is building, as Stamp Stampede has sold 14,000 stamps in 2018 alone and 4,500 people pledged to stamp 1.9 million bills for the eighth anniversary of Citizens United in January. As the grassroots campaign grows, Cohen remains optimistic about the future no matter what the federal government does to make headlines each day.

“You can either be hopeful or throw up your hands and say, ‘We’re screwed,’” Cohen says. “I choose to be hopeful.”