“This is my way home,” says Matt Bad Wound. He is one of several people making a 350-mile journey from Boulder, Colorado, to Pine Ridge Indian Reservation on horseback as part of a fundraiser for the South Dakota based nonprofit, The Tipi Raisers.

It’s day seven of the roughly three-week ride and we start the day with a traditional prayer and smudging ceremony, as The Tipi Raisers Executive Director Dave Ventimiglia carries burning sage to each of us, circling our horses in the rising smoke as we take in its earthy smell.

Bryan Deans, a Lakota member and staff carrier, offers a horse song, honoring the connection the animal provides between man and the universe. The horse points in all seven directions — north, west, east and south, plus the ears point towards heaven and the hooves ground us to the earth below. As the rider sits in the middle of the horse’s back, they become centered as the animal’s heartbeat points towards the seventh direction, the inner self.

Deans then hands over his traditional hooked staff to Ventimiglia who will carry it for the day. “Dave’s a non-member but I think the thing is we have to pass this knowledge on to others,” says Deans. “We can’t do it alone. We have to cultivate relationships like this because allies are very important.” 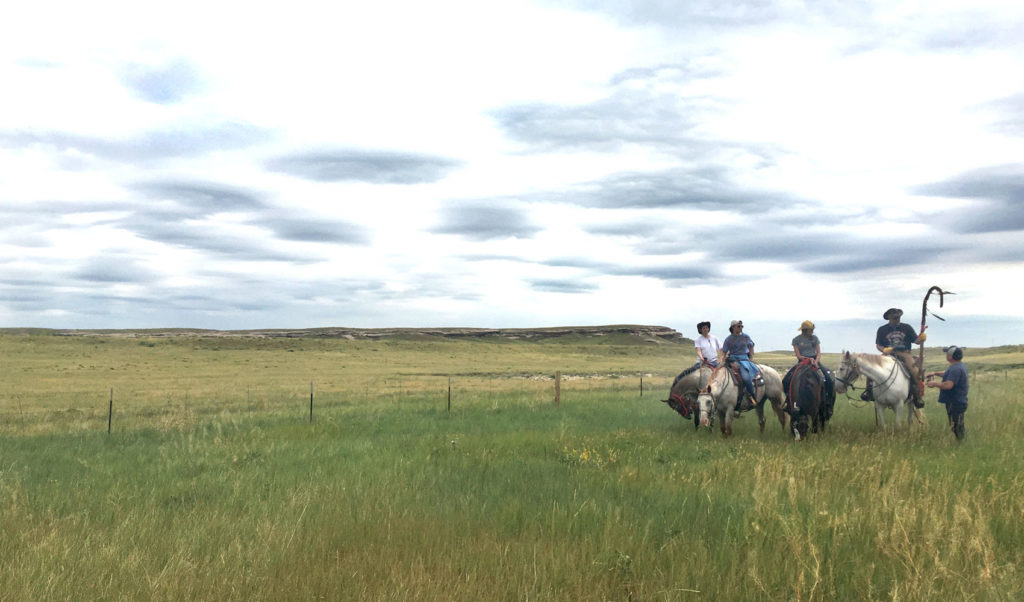 Carrying the staff on horseback creates a trail of blessing, Deans explains. The staff leads riders all day, as the horses slow when the staff is held high in the air or stop when it is outstretched. There are six of us riding today between Greeley, Colorado, and Cheyenne, Wyoming, in the wide ditch of tall grass and wild sunflowers along U.S. 85. We start at a walk, then begin to trot, occasionally breaking into a canter.

A group of both Lakota and non-natives, The Tipi Raisers are working to bridge the gap between Native American traditions and the modern world. According to its website, the group believes, “that the wisdom, culture and traditions of the Lakota People can inform and benefit the Modern World at the same time that the Modern World can assist and support the Lakota People in creating more prosperous and humane living conditions on the reservations.”

Home of Crazy Horse and the Wounded Knee Massacre in the late 19th century, Pine Ridge has since become one of the poorest zip codes in the country. More than 50 percent of the population lives below the poverty line and unemployment rates are estimated at 80 percent with a per capita income of $4,000 to $6,000.

Living conditions on the reservation have often been described as substandard with many homes lacking water, electricity and indoor plumbing. Overcrowding is also an issue, Bad Wound says, as multiple families have no choice but to share living space.

“Housing is a big need,” he says. “There’s maybe five families in a home most of the time. And a lot of families live in trailers ‘cause it’s cheaper.”

In a collaborative effort to address these issues, The Tipi Raisers organize service trips to Pine Ridge, where participants are introduced to the traditions of the Lakota people while also working on a service project. Groups and individuals participate in inipi or traditional sweats, drum and dance ceremonies, and horseback rides, while also repairing and building houses, planting gardens and building fences.

The current cross-country trip on horseback is a way to raise money for the service projects while also honoring the culture of the Lakota people.

“You have this incredibly beautiful culture that has this desperate need and you have to figure out how to put money into a culture that that’s not really how they do things,” says Ventimiglia. “So we’ve really struggled with how do you bring money in because that’s necessary but in a way that’s respectful to their culture.”

The group’s first fundraising horseback ride in 2014 took them from Breckenridge to Lyons, raising $45,000 in the process. This year, the group started at Fairview High School in Boulder and plans on arriving on Pine Ridge Aug. 18. They have already raised over $60,000 in both cash and in-kind donations.

“We want this to become an annual thing,” Bad Wound says. “We need it, we need more horse rides like this you know, because we’re the horse nation, it’s who we are as a people. People should be on horses. To me it’s a whole different experience.”

Bad Wound, who was raised traditionally, rode horses when he was younger, but has only just started riding again.

“I was always given the stud, you know, the really stubborn horse and I always had a bad experience. I really didn’t like riding horses,” he says. “But now that I’m older I have more confidence on top of a horse. I think if I fall, it’s not going to hurt as bad. It still hurts though.”

An hour or two into the ride, Ventimiglia picks up the pace once again and our horses begin cantering, maybe even galloping, towards the distant horizon beneath an endless and cloudy Western sky. But we’re soon stopped by a honking horn. It’s Deans, who is pulling the horse trailer along the side of the road behind the group.

Ventimiglia raises the staff, as our horses slow we turn and see Bad Wound’s riderless horse, the young man running up from behind with a sheepish grin.

It seems that as the horses began running, Bad Wound lost his balance, rolled right out of the saddle and into the tall grass. We all get a good laugh as he climbs back into the saddle.

Ventimiglia breaks into even a wider smile as he begins to recall another time when he was hosting a group on Pine Ridge.

He says the whole group looked up to see Bad Wound riding horseback along the crest of the hill, silhouetted by the setting sun. He dramatically paused, sitting straight upon the back of his horse, before beginning to gallop down the hill towards the group. As he rode, his long jet black hair whipped behind him. The group felt as if they had been transported back in time, Ventimiglia says. It was like a scene from a movie.

But as horse and rider approached the group, the horse suddenly swerved sharply right and Bad Wound flew, less than gracefully, left.

The spell was broken and the onlookers were catapulted back into the 21st century.

Lighting a cigarette, Bad Wound laughs again at the retelling of this story.

“We’ll let you finish that cancer stick before we start going again,” Ventimiglia says. A few minutes later, the horses start to trot, Bad Wound once again bringing up the rear. 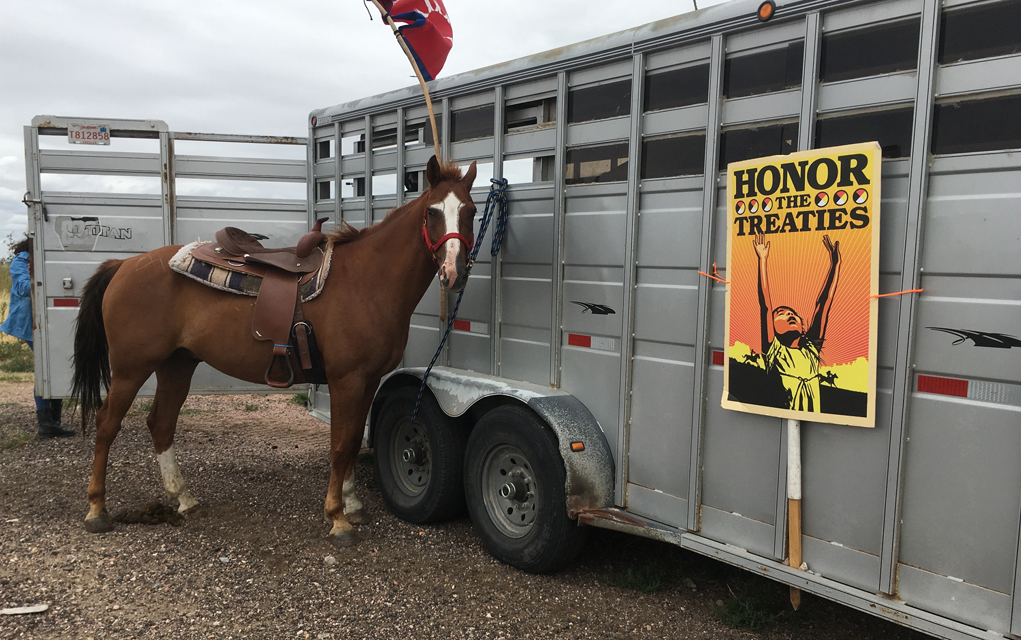 Although he grew up on the reservation, Bad Wound spent most of his teenage years moving around the country, from California to Arizona to Louisiana. “We moved down south, just everywhere because my little brother’s dad, his job took him everywhere. We would stay in motels, wherever we could, we went to school everywhere,” Bad Wound says. “I went to schools, public schools, around white kids. For the longest time they thought I was Mexican.”

Later leaving his stepfather whom he alleges abused him, Bad Wound returned to Pine Ridge with his mom for his final year of high school. It was just the two of them — his twin sister had just gone off to military school after running into some trouble and his younger brothers stayed with his stepfather. Although he appreciates the conveniences of life outside the reservation, he was more than happy to return.

“I don’t ever want to leave home,” Bad Wound says. “We live on this road, they call it dam road or lakeside road. … Every time I get on that road I just have the ‘ah, I’m safe, I’m home’ [feeling]. I don’t have to worry about nothing. As soon as I’m home, it’s quiet.”

The mother and son moved into his grandparents’ house, which stood in disrepair having been boarded up since their death 17 years prior. They’ve been working to remodel the house ever since, which is how Bad Wound met Ventimiglia and The Tipi Raisers. Then he heard Ventimiglia was looking for a cook to help out with the groups he brought up to the reservation.

“I took cooking classes in high school, growing up. I had to cook a lot being the oldest son, the oldest, you know, sibling,” he says.

“When we go to these groups we have to decide what we’re going to talk about because you can’t just talk about hard-core poverty with young elementary kids,” Bad Wound says. “Maybe with high school kids we can talk about the real things that go on back home, the molestation and stuff like that. But I’m not going to bring that up with 5-year-old kids.”

But the elementary school kids have shocked Bad Wound with their curiosity and questioning, not only about the Lakota traditions, but also the tense history between the European settlers of the West and the Native American tribes who already called the land home.

“These kids had some deep questions like ones adults would ask. They said, ‘What are your feelings towards white people since they killed everybody at Wounded Knee?’” Bad Wound says. Although the question caught him off guard, and he had to stop and think about how to answer it, Bad Wound also appreciated the honesty of it.

When not working with The Tipi Raisers, Bad Wound spends his time beading, an artform he taught himself by watching others on the reservation, with a few tips from his grandmother. He also recently started his own garden, growing corn, tomatoes, watermelon and several varieties of squash.

Now 24, Bad Wound says he’s one of the few people his age who hasn’t already had children and he finds it difficult to find full-time work on Pine Ridge as he battles nepotism and a lack of professionalism, he says. He would like to continue his education, first attending community college on the reservation but then admitting he’ll most likely have to leave to get a full degree. He wants to get a business degree and study tribal law, although not to practice, he says.

“I guess it’s just good to have back home,” he says. “I don’t want to get political or anything. I want to have that education if someone has to argue or something or if I want to change something back home. You just kinda need that education.”

And that seems to be Bad Wound’s goal working with The Tipi Raisers — to help preserve the Lakota heritage and traditions while also finding solutions to combat the harsh realities of life on Pine Ridge.

Last summer was particularly rough. Two of his cousins died in a drunk driving accident on the 4th of July, then a good friend in North Dakota overdosed in August and his aunt committed suicide. Despite all this, Bad Wound remains hopeful as we ride toward the Wyoming border.

“There’s a lot of people dying back home,” Bad Wound says. “But we’re riding for the Lakota people. For me, it’s a lot of weight on my shoulders but when I get home, hopefully there’s a change.”

Visit thetipiraisers.org for more information or donate to the ride.