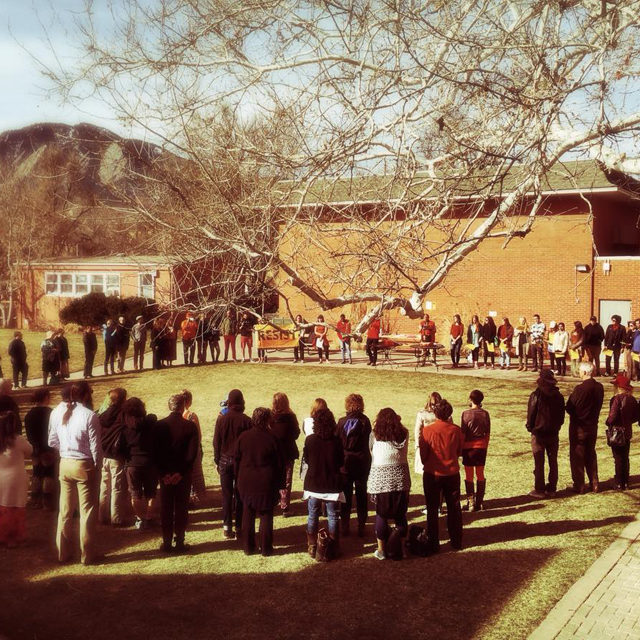 On the morning of March 14 at Naropa University, roughly 80 students, faculty and administrators gathered in a circle under the branches of an ancient sycamore towering over the Arapahoe campus green. One by one, 17 attendees took turns reading facts about gun violence, followed by a gong, and then a moment of silence in memory of each of the students killed in the mass shooting at Marjory Stoneman Douglas High School in Parkland, Florida, a month earlier.

The student-led walkout — one of thousands organized at high schools and colleges across the country with the goal of raising awareness about gun violence — ended with a song and a bow, a tradition at the Buddhist-inspired university.

As people dispersed, a few walked into the adjacent parking lot and witnessed an unexpected scene: A man wearing an American flag hockey mask stood on top of his car, music blaring from the stereo as he mimicked shooting into the sky with his hands, according to Shannon Aulabaugh, public information officer for the Boulder Police Department.

The individual — a Naropa student engaging in a counter-protest in support of Second Amendment rights — was soon “confronted” by a member of the faculty, told he was suspended, and then sent home, according to Aulabaugh.

Later that day, Naropa President Charles Lief sent an email to the Naropa community announcing that the student was suspended, as his “actions and behaviors have been deemed to be in violation of the University’s code of conduct and went far beyond any form of reasonable expression.”

Due to the “seriousness of this incident,” Lief explained that the student would be prohibited from setting foot on campus without permission and that the administration had filed a report with police.

While a Boulder police officer did respond to the incident, Aulabaugh says he took no action and assigned no case number as “there was no crime committed.”

Legal or not, Lief’s email noted the “trauma experienced by many” on campus as a result of the “very ugly and troubling incident,” and included links to care providers for any students who might benefit from counseling.

(None of the multiple student eye-witnesses of the incident were willing to speak on the record to Boulder Weekly, and President Lief requested that all communications to faculty be routed through his office.)

Ethan Au Green, a Naropa graduate student and one of the main organizers of the March 14 walkout said the purpose of the walkout wasn’t to come up with specific policy proposals, but to raise awareness and urge action on gun violence.

Two weeks prior to the event, President Lief sent an email to the Naropa community saying that the administration “fully supports the student-led initiatives that are honestly and courageously taking on the gun lobby” and is “proud to be aligned with this righteous cause.”

This overwhelming support made the episode in the parking lot that much more surprising to Au Green. Though he wasn’t an eyewitness, he has spoken to those who were, and feels deeply affected by it.

“My first reaction was shock,” he says, describing his emotional state when first hearing the news. “My second response, honestly, was gratitude, because no one was physically injured.”

Next, when Au Green learned how “people of color, especially women, felt specifically targeted and traumatized” by the incident, he felt angry and sad.

This targeting of people of color, also mentioned in the president’s email, appears to be related to the music played by the student wearing the hockey mask, which Aulabaugh says was characterized by witnesses as “racially insensitive.”

While Au Green supports the suspension and is in favor of the restorative justice process currently being carried out by the administration, he also feels “compassion for everyone involved and the responsibility to pursue further dialogue.”

Lief wrote in an email to BW that restorative justice is an “alternative dispute resolution process … focused on bringing together willing parties who have been aggrieved or are believed to have perpetrated an offense in an effort to achieve some form of reconciliation.”

As a private institution, Naropa reserves the right to formulate its own policies and determine which actions or statements may or may not constitute a violation of the school’s code of conduct, and thus require restorative justice proceedings.

While President Lief didn’t answer questions as to what rules the student may have broken, the school’s Code of Conduct lists several “prohibited acts,” including, “threatening or causing non-physical abuse of or abusive behavior toward another person, including, but not limited to verbal or written statements that constitute a form of expression not protected by the First Amendment, such as obscenities, fighting words or defamation.”

The code defines non-physical as “having or creating an effect of intimidation hostility or demeaning [sic]” in a situation where “someone uses their physical presence to menace another, although no physical contact occurs.”

While the code doesn’t elaborate on the meaning of “menace,” the first entry in the Merriam-Webster Dictionary is “a show of intention to inflict harm,” and the second is “an annoying person.” Unless Naropa is taking emotional harm into account, the first definition doesn’t quite apply. It also seems unlikely that Naropa would suspend a student simply for being annoying, since, depending on one’s point of view, any and all protest might reasonably be considered so.

What is certain is that Naropa issued the student an interim suspension, which the Code says may be imposed to “insure the safety and well-being of members of the Naropa University community,” protect property, or prevent “threat of disruption or interference with the normal operations of the university.”

On April 26, Naropa hosted a “Restorative Practices Healing and Peace Conference,” which included the suspended student and 10 community members who either witnessed the counter-protest or have been involved with the follow-up response.

Au Green was present at the two-hour meeting and says an agreement was reached that will end the student’s six-week suspension, so long as he adheres to the stipulations.

“I feel happy and relieved to have reached a sense of closure on this ordeal,” Au Green says.

While Au Green agrees with the administration that the student’s actions were out of line and warranted a suspension, others see things differently.

Eugene (name changed for privacy), a Naropa student studying Buddhism, doesn’t support the school’s handling of the event in the parking lot, while he didn’t witness it.

“If it was somebody making direct threats, that should be dealt with because that’s actually illegal,” he says. “But just shooting [fingers] into the air? I mean it sounds like he didn’t really threaten anyone, he just kind of ruffled feathers and went against the grain.”

Eugene believes Naropa’s founder, Tibetan Buddhist scholar Chögyam Trungpa Rinpoche, may have had a very different way of dealing with the counter-protest than the current administration. A proponent of “crazy wisdom,” who passed away in 1987 at the age of 48, Trungpa defied many stereotypical assumptions about the serene demeanor of Buddhist practitioners.

David Wilde, a follower of Trungpa, published an account in the Chronicles of Chögyam Trungpa Rinpoche in 2004 of an incident from the early 1970s at a “redneck bar” in rural Pennsylvania with Wilde, Trungpa and a few of his students.

Earlier that day, Wilde had given Trungpa a water pistol as a joke, and during the meal, Trungpa repeatedly squirted the waitress until she threw them out of the establishment. On their way out, the group passed a pool table where a patron was setting up for a shot, and Trungpa deliberately jostled the pool players elbow so he’d miss, earning a few curses in return.

In the parking lot, as the group sat in the car ready to leave, the pool player appeared pointing a rifle at Trungpa through the open window. He called the meditation master a racial slur and threatened to blow his head off.

Stunned, the pool player just stood there, rifle in hand, as the group slowly backed out of the parking lot and off into the Pennsylvania night.

Trungpa isn’t the only early Naropian who Eugene says would disagree with the school’s disciplinary approach these days. Specifically, he mentions beat authors Jack Kerouac and William S. Burroughs as examples of the rough-around-the-edges personalities who originally inspired the college. A popular photo shows the pair engaged in a mock knife fight, holding real knives.

Maintaining that he’s not a “right-winger,” Eugene believes guns are a “neutral thing,” and that there’s a difference between firearms and violence.

“You can use a gun to commit violence, but you can use all sorts of other things,” he says.

When asked if he thinks his opinion on guns is in the minority at Naropa, he says, “probably.” But he adds that, because of the dominant culture at Naropa and in Boulder, there is no way of knowing, since “people don’t really advertise that they’re into guns for fear of being labeled something.”

“I know that there are lots of other people at Naropa who shoot guns because I’ve gone shooting with them,” he says.

Though supportive of the Second Amendment, Eugene acknowledges that mass shootings are “kind of a new thing,” calling them “our new modern neuroses.” He also believes the average gun-control advocate has good intentions. However, he feels that the administration’s response to the counter-protest went too far.

“The Naropa thing, I think, is like, if somebody feels uncomfortable, that’s the issue,” Eugene says. “Not if you did anything wrong, but how other people interpret it.”

While the incident is long over and the student is going through the restorative justice process, questions remain, such as what kind of “racially offensive” music did he play while he stood on his car? And, ultimately, what’s the line between “reasonable expression” at Naropa and a violation of policy?

It’s clear that the administration allows protests, as evidenced by its endorsement of the walkout against gun violence. Indeed, in President Lief’s email to the community prior to the event, he went so far as to ensure prospective students that “participation in peaceful protest or acts of civil disobedience will not impact our admissions decision, regardless of any misguided disciplinary actions that might be taken by high school administrators or others in positions of power.”

If the student had simply held a sign advocating for gun rights, would he have been suspended? If pointing fingers into the air in the shape of guns is a threatening act, does that also apply to raised fists? If covering one’s face with an American flag hockey mask is prohibited, how about the black bandannas worn by Antifa?

From the campuses of private universities such as Naropa, to taxpayer-funded public forums, the difference between free expression protected by the First Amendment and speech and actions deemed too threatening and offensive to be condoned is one of the most controversial — and important — political discussions of the day.

While Naropa University is a private college answerable only to its own policies, the incident reminds us that the line between which words, behaviors and positions are acceptable and which are not remains blurry.