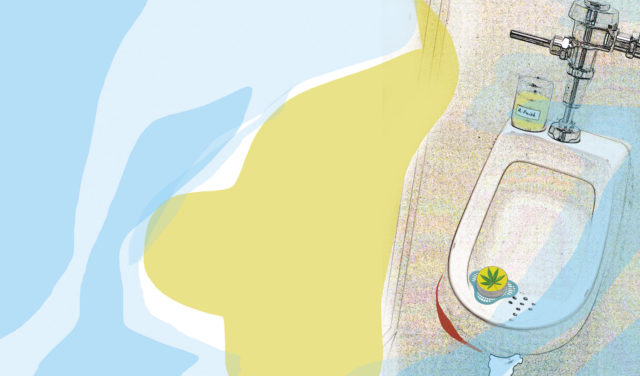 It will be illegal in Colorado for employers to fire workers solely on the basis of a positive test for marijuana if a newly proposed bill is passed at the state house.

The Marijuana Consumer Employment Discrimination Protection Bill would clarify that a positive drug test for traces of marijuana can’t be grounds to fire an employee unless the person “used, possessed, or was impaired by marijuana during the hours of employment.”

The bill, which is being proposed by the marijuana advocacy group NORML, would also require employers to provide objective evidence that an employee was unable to perform their job because of marijuana use.

Colorado law protects employees from being fired for participating in lawful activities outside of work, but Golden says the state law is beholden essentially to “a drafting error,” in that because marijuana is still prohibited at the federal level, consuming it can be deemed an “unlawful activity.” This bill would clarify that when it comes to marijuana, laws should reflect the state’s legality of marijuana, not the federal government’s view of it.

“In Colorado, you’re letting the federal illegality define what can happen between you and your boss,” Golden says. “But if you think it’s right — the voter-supported legalization of marijuana for recreational purposes — how could you allow employers to treat it like it’s illegal? It’s not fair.”

Currently, if an employee consumes marijuana outside of work, say on Saturday, and has trace amounts of marijuana appear during a random drug test on Wednesday, that employee can be fired, even if it didn’t affect their job performance. This was confirmed in a 2015 Colorado Supreme Court ruling against a quadriplegic, who used medical marijuana outside of work, tested positive during a drug screening on a later date, and was fired.

The bill would set out medical marijuana users as a protected class. It too would not affect employers’ ability to screen for other drugs, nor would it supersede federal laws regarding employees who work, notably, with heavy machinery, or for companies that have federal partnerships but operate in Colorado.

Golden says the proposed legislation borrows from a City of Boulder ordinance that prevents employers from making employment decisions based on drug tests unless they can provide “specific, objective, clearly expressed facts” that would indicate the employee was under the influence of drugs or alcohol. It exempts certain state, local and federal government employers as well as the University of Colorado and Boulder Valley School District. The Boulder ordinance also requires employers to make it clear if a drug or alcohol screen will be part of the hiring process.

But Golden says even that stipulation needs another look — “you’re excluding qualified people from your workforce” when companies discourage people from applying to jobs because they’re unsure of how a drug test will shake out.

Curtis Graves, spokesperson for the Employers Council, a Denver-based, member-driven advocacy group for 4,000 U.S. employers, says “no doubt” the current state law is discouraging qualified workers from applying for jobs. He says it also prevents marijuana users from filing for workman’s comp. Graves contends, however, that there currently does not exist a tool or method that would objectively prove a person’s job performance was impaired, and thus doesn’t support the proposed legislation.

“If they had a breathalyzer, which I’m sure will exist in a few years, there’d be no reason to object whatsoever,” Graves said.

NORML is suggesting an alternative model, however. Instead of testing for traces of marijuana in a person’s system, a better method, the group says, would be to test for impairment when the need arises. Golden says this can be done through alertness testing, and points to a company called Predictive Safety, which provides resources to administer such a test.

“It’s basically matching shapes and doing the things that if you’re screwed up or tired or not ready to perform, you’re not able to do it,” he says.

Employers will still be able to screen for impairment, and Golden says there’s a plotted-out process that ensures both the employer’s and employee’s rights are valued.

“It’s a remarkably progressive way to look at things,” Golden says. “What they do is functional impairment, basically are you ready to go today. Are you mentally and physically capable to go today, and if you fail that, they say what’s the problem? Are you not able to perform up to your baseline? And if you don’t perform up to the baseline, then they can ask questions, send you to HR. [They’ll ask] are you sick, are you tired, are you on drugs?”

The tests are used at the federal level to test for alertness of workers in specific high-intensity jobs.

Though Graves says the proposed legislation is “a move in the right direction,” he thinks the solution needs to come at the federal level, despite recognizing the fact that the current administration has indicated a desire to clamp down on states that have legalized marijuana, and that a solution is unlikely to come at that level. Graves says it’s important for the state to keep the rights of employers, and future employers, in mind.

“As long as we remain in the minority of states with legal marijuana, we have to be careful about the rights we grant because it may chill the desire of business to come here,” Graves says.

The Employers Council asks in its biannual survey if employers are using random drug testing. Graves says though the Council’s members are more likely than non-members to test employees, “the trend is clearly going away from testing.” Graves adds that employers have the ability to avail themselves to qualified employees by stating they simply don’t test for marijuana.

The bill hasn’t reached the floor of the state legislature yet. Golden says NORML has a few Democratic sponsors lined up, but needs to find a Republican sponsor in the state senate. Though he says several Republican lawmakers have expressed interest in the bill, there remains a need for someone on the right to sign on.

There is precedent for statewide legislation like this. Maine residents voted to legalize marijuana in 2016, and though the governor of that state has yet to approve legislation that would allow for commercial sales of marijuana, the state has made it illegal for employers to fire workers solely for a positive drug test.

NORML and Predictive Safety will be hosting a demonstration of the alertness testing at the state house on Feb. 21. Golden hopes legislators will be able to see first-hand the efficacy of the alternative model and move forward with NORML’s legislation.