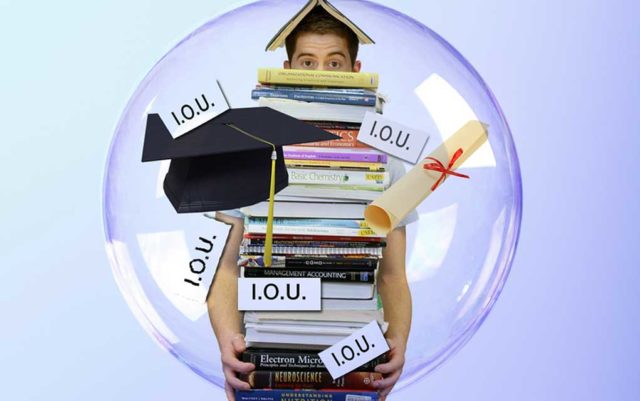 With the announcement of President Trump’s 2020 budget came proposals to significantly alter how, and even if, people pay off student debt with the help of the federal government. Although Congress has ignored Trump’s similar proposals in the past, the student debt crisis has continued to deepen, reaching a high of $1.5 trillion in 2018.

However, several states have already created guardrails for student loans, and Colorado is joining the fight for higher education affordability.

In Colorado alone, over 760,000 people have student debt, adding up to $26 billion. To battle this crisis, a bill (SB 19-057) sponsored by Colorado Senate Majority Leader Steve Fenberg (D-Boulder) and Sen. Tammy Story (D-Golden), was signed into law by Gov. Jared Polis on March 15, promoting the disbursement of important information regarding student loan forgiveness and repayment programs in Colorado.

“We are in a student debt crisis across the country. This impacts Colorado because student debt is such a heavy weight,” Story says.

The law requires the Colorado Department of Personnel to annually send information to state employees about available programs. Over 50 federal student loan forgiveness and repayment programs are currently authorized under federal law, and those who qualify will be notified through a single email or a letter. And that contact could be the first step in helping borrowers pay off their student loans fast and efficiently.

Although it’s difficult to overcome the price of higher education, the lack of information borrowers receive from loan providers intensifies this crisis, which is also damaging state economies. This massive debt burden is causing a variety of negative economic impacts such as an increasing number of millennials being unable to purchase homes.

According to the American Community Survey in 2015, “If a person’s household student debt increases from $50,000 to $100,000, with all other things held the same, the likelihood of owning a home will decrease 15 percentage points.”

Despite such consequences, an extremely small number of people actually utilize these programs. Currently, only 1 percent of those who qualify for some form of relief in Colorado — such as teachers in state colleges and universities, nonprofit workers and active military — use them.

“If there are no resources, it can be daunting,” says Nellie Moran, Fenberg’s policy and communications advisor. “Many don’t realize they qualify for it.”

After working two jobs while in undergraduate and pharmacy school, Jeni Burckart’s $118,000 in unsubsidized federal loans increased to $128,000 because of interest. In order to receive a specialization in critical care, Burckart had one year of residency that ultimately grew her balance to $132,000, even while making payments above the monthly minimum.

“In my first year of full-time pharmacist salary, I paid over $14,000 in interest on my student loans and I couldn’t deduct any of it,” Burckart explains, “I just got so frustrated.”

Now she’s the senior director of health care for Tuition.io, a consumer student loan management system. Its software allows borrowers to see all of their loans, indicating how long it will take to pay them off with current monthly payments. The company is also developing a tool that helps people find what loan forgiveness programs they qualify for or what they can do to become qualified. Similar to the intentions of Fenberg’s and Story’s SB19-057, an increase of information can help borrowers choose the best plan to pay off their debt as fast as possible.

Students in Colorado have also expressed their concerns over future debt and are determined to help change the loan system. Rudy Joon, a student intern at New Era Colorado, is one of many who have helped advocate for SB19-057 and other bills concerning student debt both at the state Capitol and on the University of Colorado Boulder campus.

“This bill is important to me because I am interested in working for the nonprofit sector after college and knowing that this program could be in place will offer me security with my student debt,” Joon says.

Having students involved in the debt crisis debate helps make the case for how big this issue really is. And it seems to have worked.

Fenberg has sponsored other bills to help with the student debt crisis, including Senate Bill 19-002, which would require the state to regulate student loan debt, like every other type of debt in Colorado. If passed, it will provide parameters around the licensing process and provide significant oversight of lenders. The Financial Services Authority would create an ombudsman in the state attorney general’s office to provide students with a resource to navigate issues with student debt when they arise.

“Given that over 760,000 Coloradans are burdened by student debt,” Fenberg says, “my goal is to ensure that as many people as possible are aware, and enrolled, in programs that can help alleviate the financial strain of debt.”