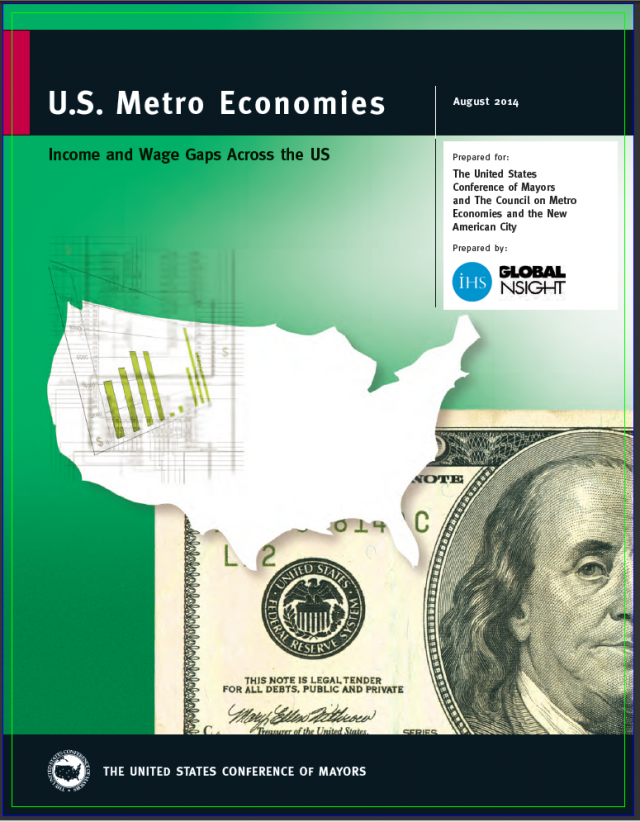 This just in: Boulder is expensive. But the concentration of our wealth (about half of Boulder households make $75,000 or more annually) and the rate at which our wealth is growing is on a collision course with the dwindling number of affordable houses and rentals. These trends could make Boulder too expensive for low- and middle-income families… very soon.

At least as much can be gleaned from a study released Monday by the U.S. Conference of Mayors that examines wage gap and income inequality in hundreds of cities across the country. By comparing Boulder’s numbers with cities of similar size and demographics, local officials and economists hope to come up with a plan to address issues like affordable housing, minimum wage, diversity and more.

The study drew a few conclusions about how the U.S. economy rebounded following the recession, which can be used to contextualize Boulder’s unique economy.

First, the 8.7 million or so jobs that were lost during the recession have been fully regained. However, the quality of those jobs is not as high — wages now are about 88 percent of what they were before the recession in industries like manufacturing, construction, retail and administration.

“The main finding is there’s been a significant amount of money in terms of wages that hasbeen lost due to the fact that now many of the jobs we’ve gained during the recovery are lowerpaying than the jobs we lost during the recession,” says economist Troy Walters, who analyzes at IHS, Inc., the company that prepared the study for the U.S. mayor’s group.

Many workers who lost jobs in those industries and couldn’t find work after the economic recovery were forced into even lowerpaying industries like food, hospitality and health/ social assistance.

So to sum up the report: Regained jobs aren’t pay ing as much, the poor are getting poorer while the rich are getting richer, and two-thirds of American city households make less than $75,000 annually.

Boulder also has the seventh highest median income growth rate — about 4.5 percent annually. That is, generally speaking, wages are rising for everyone in town.

The main reason Boulder’s economy is so robust is because it is dense with technology companies and other lucrative industries, the study says. And these high-grossing jobs are not in any bubble bound to burst, says Walters.

“The Boulder economy is fairly diverse enough and not reliant on any one particular sector like technology. There’s a number of other high-income sectors that would support wage growth should something like the tech sector bottom out,” Walters says.

“In Boulder, we saw that median income actually increased at a faster pace than average income, which is kind of indicative that income inequality has not risen in Boulder during the course of the recent recession. So that’s good news for Boulder,” Walters says.

In theory. With high wages comes high cost of living, including high housing prices. The cost of living in Boulder is 18.4 percent above the national average and there’s not much anyone can do to avoid that, Walters says.

“It’s tough [to lower cost of living] from a policy standpoint,” says Walters. “In Boulder, with such a  high concentration of jobs in engineering and technology and finance, the city would face a pretty big challenge in reducing the cost of living because cost of living is going to be driven by the people who work there.”

The truth is that although wages in Boulder are rising, they’re not rising fast enough and in enough industries to ensure that there will be adequate housing for low- and middle-income families 10 years from now. While the national economy has too few people making the most money, Boulder actually has too many people in the top earning bracket, creating a top-heavy housing market that shuts out the bottom 53 percent of households — those that make less than $75,000 annually.

According to the housing group, in the last decade, Boulder has lost 1,000 affordable homes for rent and for sale, and the number of homes available for less than $300,000 has been halved. At this pace, there will be nowhere for anyone making less than $60,000 to live five years from now except city-designated affordable housing. Whoof. The median home price in Boulder is now more than half a million dollars.

The income needed to afford a one-bedroom rental is one of the highest in the nation at $18.31/ hour, according to a 2014 Washington Post study. Boulder has 24,000 jobs that pay $19.23 or lower — about 7 percent of the working class. About 4.5 percent of Boulder residents are unemployed.

A 2013 housing market analysis commissioned by the City of Boulder found that the rental market, with nearly zero vacancies, was one of the tightest in the country. Because of this, investors can buy rental property and raise rents, and there’s an insatiable market ready to accommodate it. Boulder Housing Partners executive director Betsey Martens says one B-minus rated apartment building (that’s not good) recently went on the market for $7.5 million but was eventually sold for $12 million.

“We are reaching a housing crisis,” says Martens. “The Boulder Valley Comprehensive Plan creates a beautiful image of this community, but the housing market takes us off course.”

And because the market is so tight, many affordable rentals are often of very low quality, says councilman Andrew Shoemaker, so many people choose to maximize their dollar and live in Longmont or other nearby communities.

In fact, the market is now shutting out demographics key to successful, vibrant cities: the population of people aged 25 to 44, for instance, has declined by 15 percent since 2000. This is despite the fact that the city has recognized on numerous occasions, in numerous meetings, that many people in that age demographic want to live in Boulder but can only afford to commute into the city for work.

Councilman Macon Cowles says the housing market is becoming exclusionary and the lack of low- and middleincome housing is distressing and will lead to a critical lack of diversity in town.

“I don’t think most Boulder people want this town to become a place where if you don’t make $80,000 you can’t live in this town,” Cowles says. “I think this is a very serious problem.

“I am worried that to the extent we get our startup economy booming here, what we see is a lot of white men moving to town that are highly compensated and pushing out other parts of our community and I don’t think most people want this. Google just published its numbers and it’s very, very distressing. The number of white men in their workforce is something like 80 or 85 percent. More and more we’re seeing a separation of the rich and the poor,” Cowles says.

The solution, according to Boulder Housing Partners, is to grab as many buildings as possible and make them permanently affordable. The group hopes to retain existing affordable housing structures within their portfolio while adding 800 household units for a mix of income classes.

“We need the city to help bridge the gap. If we don’t buy these units and save them for the workforce housing, then they’re going to disappear and it’s really hard to replace workforce housing units,” says Martens.

Martens says the biggest problem they face is outbidding those same investors who see Boulder rental properties as lucrative investments and who subsequently raise rents.

“The last time we successfully bid on something was 2001. We need some help,” says Martens, saying specifically that that help from council should include development of opportunity sites, initiatives to preserve existing affordable housing, allowing tenant density bonuses for affordable housing projects, and dispensing funds from bonds, grants or tax revenue to buy prospective buildings.

However, adding a modest amount of affordable housing and maintaining the affordable housing that already exists may help a segment of the popu- PARTNERS lation, but competition for those dwellings is already fierce and other low- and middle-income people may be shut out. In short, it could just be a drop in the ocean.

Count Councilman Sam Weaver as a skeptic that the Boulder Housing Partners initiative would curb market trends enough to help out low- and middle-income families.

“This isn’t going to have much of an impact on the market in general,” Weaver says. “It’s not going to increase supply; it’s going preserve supply. I’m afraid the situation we’re all working in is vastly influenced by the decisions we’re making about how the rest of development is going.”

And Councilwoman Lisa Morzel says the effort to convince rental property owners to give up some units for affordable housing is futile.

“People are making way too much money. How are you going to get people to give it up?” says Morzel.

On outbidding developers for older apartments to renovate for affordable housing, Mayor Matt Applebaum added, “I guess we’ll see how the market plays out in those situations. I don’t want to get in a bidding war with them.”

Boulder Housing Partners says they do have evidence that their method works. The shining example, says Martens, is the Holiday neighborhood in North Boulder, which has “different income, different professions, different backgrounds, different everything” amongst its residents. Martens says replicating that model throughout Boulder could avoid a situation where residents can point anywhere in Boulder and say, “That’s where those people live and that’s where those people live.”

Although the Boulder Housing Partners work with the city’s affordable housing board, their initiative is separate from the city of Boulder’s Comprehensive Housing Strategy. That effort has set long-term goals that include major housing projects like one in Transit Village and east Arapahoe, transportation goals including rail transport, and major parking developments.

But the Comprehensive Housing Strategy is working too slowly, says Martens, and the damage to affordable housing will be done by the market by the time any initiative from that strategy breaks ground.

Finally, Boulder Housing Partners presenters did speak to Boulder City Council on Tuesday, Aug. 12, about how to provide affordable housing for elderly and homeless residents in Boulder. By looking at Santa Barbara, Calif., which is similar in size and demographics to Boulder, the city can learn how to build elegant and functional housing for a large homeless population, they said.

Two housing structures in downtown Santa Barbara, Artisan Court and Garden Court, have almost 100 units each of about 250 square feet per unit. Because the structures were built downtown, these buildings received huge density bonuses while reducing parking needs. The buildings were built, says Boulder Housing Partners board chair Angela McCormick for “guys flipping burgers and an older population of chronically homeless people.”

But if nothing is done to address low- and middle-income housing in Boulder soon, it’s fair to say a lot more of us will suddenly start paying attention to building developments for the homeless population, too.