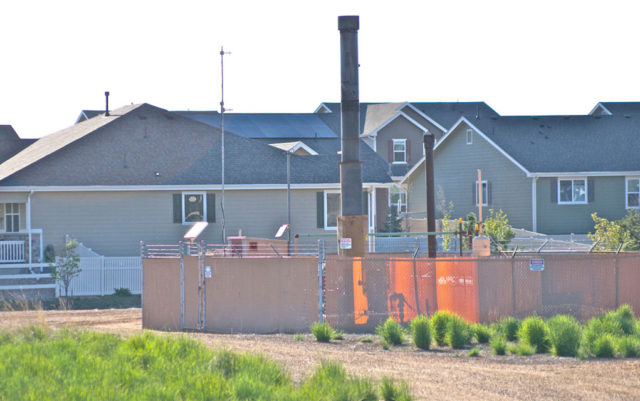 The Trump administration met with oil and gas companies on April 3 to discuss how the federal government could benefit the industry during the coronavirus.

The oil and gas industry has asked the federal government to end royalties for oil and gas culled from public land, extend permits and leases, and further reduce environmental enforcement, according to the Center for Western Priorities (CWP). The EPA recently announced it would “temporarily” suspend enforcement of fines for industry polluters.

“The oil industry has spent the last decade racking up debt at a breathtaking pace and now they’re asking taxpayers to bail out their bad business practices,” CWP Executive Director Jennifer Rokala said in a statement. “The oil industry’s wish list is shameless — rip off taxpayers and leave communities vulnerable to even more contamination. But with a former oil lobbyist in charge of the Interior Department, they will likely get what they want.”

Jayson O’Neill, spokesperson for Accountable.US, lamented the fact that much of these bailouts for the industry would come from taxpayer money.

“These big oil and corporate CEOs are clearly more important to President Trump than millions of Americans now living in a state of constant worry — over the president’s inadequate response to our crumbling economy and his epic mismanagement of this public health crisis,” O’Neill said in a statement.

Research from the Western Values Project and Accountable.US, found that lawmakers helping advocate for the oil and gas bailouts have received $14 million in contributions from the industry.

“It’s crystal clear that for these senators, Big Oil and extractive corporations come first,” O’Neill said. “This crisis revealed their true values and it’s not the American people nor the communities that would get the short end of the stick at a time when they simply cannot afford to if Trump and Bernhardt acquiesce.”

Boulder County Courts will not hear any eviction cases until June

In light of the coronavirus causing thousands of Boulder County residents to lose all or part of their regular income, the local court system said it will not hear any eviction cases until after May 31.

Landlords will not be able to evict any tenants for any reason until that time, including nonpayment of rent.

The City of Longmont recently provided guidance and advice for landlords and tenants to comply with the order: “Communicate early and often to discuss the financial realities and discuss an arrangement workable for both the housing provider and the tenant. Some options may include a payment plan, temporary rent reduction (if possible), early termination of the lease without penalty, substitute services for rent, or other creative solutions.”

The decision comes amid initiative efforts in Boulder to mandate all tenants who find themselves in eviction court have access to an attorney.

RTD gets $232 million in assistance

With decreased ridership due stay-at-home orders, the Regional Transportation District (RTD) hailed relief in the form of more than $232 million as part of the Coronavirus Aid, Relief, and Economic Security (CARES) Act signed on March 27.

Fare collection has been suspended on all buses and trains across the RTD system, and it has implemented other service changes to meet the lower demand.

RTD has experienced about a 60% decline in ridership over the last few weeks, providing about 139,000 trips each weekday, compared with 347,800 trips this time a year ago.

“The agency is working to quantify the effects the pandemic is having on its ridership and solidify actual ridership figures. For comparison, transit agencies across the United States have reported that they are experiencing a drop in ridership ranging from 45%-80%,” RTD said in a press release.

The CARES Act funds do not require a public match, and RTD can spend them on a reimbursement basis: “The funds can be used for any operations costs associated with COVID-19, including expenses related to protective equipment, cleaning supplies, salaries and any other operating costs,” the agency wrote in a statement.

Despite calls from park officials and law enforcement to shut down U.S. National Parks to visitors amid the coronavirus, Interior Secretary David Bernhardt has encouraged people to visit by waiving entrance fees.

The Coalition to Protect America’s National Parks, a group of 1,800 retired, current and former employees of the National Parks Service (NPS), says the policy has turned U.S. National Parks into “potential epicenters of coronavirus infections.” Seven NPS employees have tested positive for the virus.

The ire expressed by the Coalition is exacerbated by Trump’s meeting with oil and gas executives, outlined above.

“This meeting further proves that the current administration … cares less about America’s public lands, the ongoing health crisis posed by keeping America’s National Parks open, and the National Park Service employees who have been put at risk because of this decision — than they do about their former business partners and friends in the oil and gas industry,” said Phil Francis, executive chairman of the Coalition in a statement.