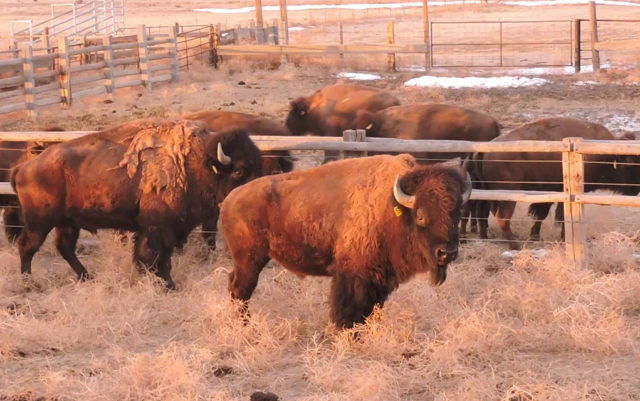 While many may know the Centennial State for its mountains, Eastern Colorado is part of the unique ecosystem of the Great Plains, where wild bison once roamed free. Although more than 30 million bison once inhabited the Plains, by the late 1800s, fewer than 1,000 remained, most of which lived in captivity aside from a few in the wild in a remote area of Yellowstone.

Recent preservation efforts, however, have reintroduced wild bison in conservation herds in hopes of bringing the animals back to the Great Plains. And as of Dec. 10, Southeastern Colorado has its first conservation herd at the Southern Plains Land Trust (SPLT)’s Heartland Ranch Nature Preserve. The transfer was facilitated by SPLT, Colorado State University (CSU) and Defenders of Wildlife, an organization that has long advocated for the establishment of new bison herds managed as wildlife as opposed to livestock.

“As a keystone species, bison are absolutely critical to the long-term health of the Great Plains,” said Chamois Andersen, senior Rockies and Plains representative at Defenders of Wildlife, in a press release. “This successful transfer will help restore these genetically-pure bison to their historic range in Southern Colorado while also revitalizing the surrounding grassland.”

Conservation groups like the Buffalo Field Campaign argue that according to a growing body of scientific evidence, wild bison are at risk of extinction as the animals have been domesticated, cattle herds and human development shrink their natural habitat and climate change continues to threaten their historic range.

The new herd of 10 bison, including seven adult females, two adult males and a male calf, were previously a part of CSU’s research herd at the Foothills Campus in Fort Collins.

In a year of racial reckoning, especially when it comes to community-police relations, the Colorado Community College System (CCCS) has plans to reshape its law enforcement training. CCCS is comprised of 13 community colleges around the state, including Front Range Community College, which has a campus in Longmont.

The Colorado Health Foundation recently awarded CCCS $1 million to review its Law Enforcement Academy Curriculum and Training, including course objectives, program requirements and instructor techniques, while embedding a focus on social justice. The redesigned curriculum will be offered to academy cadets and delivered statewide to current officers, according to a press release from CCCS.

“Our commitment to our students and to our communities is to improve lives and increase opportunity through education. We acknowledge that as the state’s largest provider of post-secondary training and workforce education, we have a responsibility to re-examine our law enforcement curriculum that prepares hundreds of new police officers each year,” said Joe Garcia, chancellor of CCCS, in a press release announcing the grant. An estimated 700 cadets go through CCCS’ Peace Officer Standards and Training (POST) program each year.

According to the release, the POST curriculum requires minimal ethics and anti-bias policing (only eight of the total 556 credit hours), whereas tactical topics and skills such as criminal processes, basic law, driving, and hand-to-hand combat make up the rest. The new CCCS project will expand the training to include areas of racial justice, diversity, implicit bias and de-escalation “to better reflect the activities that most officers engage in every day.”

On Thursday, Dec. 10, Boulder County Commissioners adopted new Article 12 rules and regulations on oil and gas development in the county, which Commissioner Elise Jones called “the strongest in the state.”

The new regulations will require a 2,500-foot setback of new developments from homes, offices, schools, childcare facilities and public trails, in addition to stronger noise, vibration and cumulative air quality monitoring, especially for ozone and hazardous air pollutants. Industry operations are also now required to use renewable energy, and operators must now provide financial assurances to cover the cost and risk of operations.

Boulder County is known for its historic fracking wars, pitting environmentalists against elected officials who have often argued they are hamstrung by state regulations. Although advocacy groups welcomed the Commissioners’ action on Thursday, they maintain a complete fracking ban is the only answer to the climate crisis.

“We appreciate that the Boulder County Commissioners have … put in place the strongest rules and regulations on fracking that they think is legally defensible,” said Micah Parkin of 350 Colorado in a press release. “Nevertheless, the reality is that we are facing a climate crisis and a public health crisis and that any additional fracking pollution will exacerbate these serious issues. So, 350 Boulder County members and allies will continue to demand that fracking is ultimately banned.”