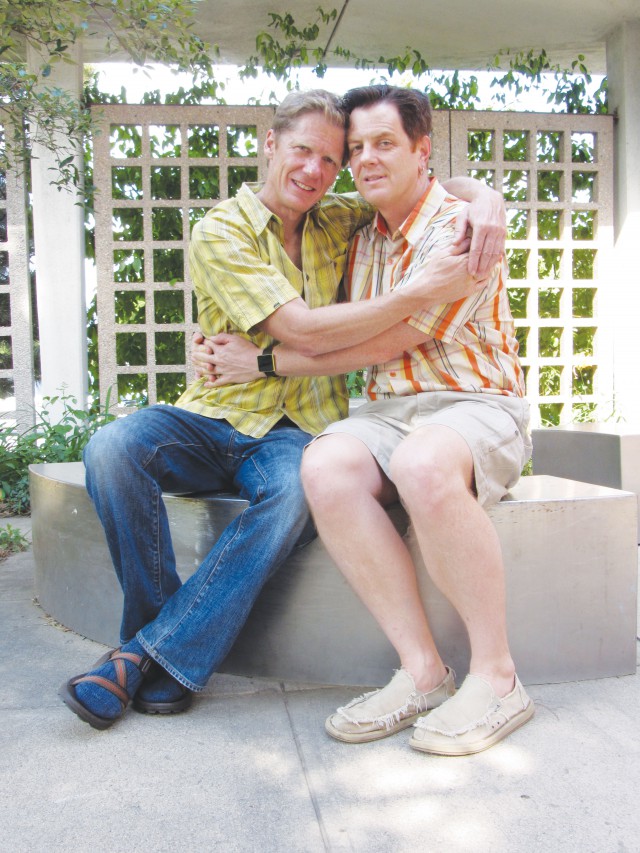 “No State shall make or enforce any law
which shall abridge the privileges or immunities of citizens of the
United States; nor shall any State deprive any person of life, liberty,
or property, without due process of law; nor deny to any person within
its jurisdiction the equal protection of the laws.”

The above statement, contained in the
14th Amendment, was added to the U.S. Constitution in 1868, shortly
after the conclusion of the Civil War, as a way to provide equal rights
to African Americans. The “equal protection clause” was later extended
to include women and other historically disadvantaged groups.

Now, nearly 150 years later, that very
same amendment serves as the strongest legal case that gay rights
proponents can make in arguing that discrimination based on sexual
orientation is unconstitutional.

And some of those proponents are card-carrying Republicans.

The unexpected bedfellows include
conservative powerhouse attorney Ted Olson, who argues that depriving
gay couples of rights afforded to heterosexual couples is simply against
the law of the land.

Shannon Minter, legal director of the
National Center for Lesbian Rights, says that having Olson take on the
fight against the same-sex marriage ban Proposition 8 in California in
2009 was a huge boon.

“I think having Ted Olson come out so
strongly as such an advocate for the gay community has made a huge
difference, because he’s one of the most powerful conservative figures
in the country,” Minter told Boulder Weekly. “That’s had a big effect.
It’s no longer a partisan issue.”

Leading experts like Minter say that one key term that even many conservatives recognize in the 14th Amendment is “any person.”

“It doesn’t say ‘any person except gay
people,’” Minter says. “The foundation goes right to the heart of the
most important principles in the Constitution, which is equal protection
and fundamental rights.”

The Supreme Court has defined certain
rights as fundamental over the years, Minter explains, such as the right
to privacy and the right to “intimate association” — controlling your
closest personal relationships, including choosing your spouse.

Another major advance in the ongoing
battle to protect gays from discrimination, Minter says, was President
Barack Obama’s decision to declare the Defense of Marriage Act (DOMA)
indefensible. DOMA, signed into law by former President Bill Clinton in
1996, defines marriage as being between a man and a woman and says no
state can be required to honor a marriage blessed by another state. But
in February, Obama announced through Attorney General Eric Holder that
the Department of Justice would no longer defend DOMA because Obama
feels it is unconstitutional.

Still, not all conservatives have been
convinced. The Republican-controlled House of Representatives took up
the defense of DOMA, and Minter says the Supreme Court could take up a
constitutional challenge to DOMA before the end of Obama’s term.

“That was big,” he says of Obama abandoning the defense of DOMA. “It says a lot about how far our whole country has moved.”

Minter was less enthusiastic about
Obama’s June 23 remarks at the LGBT Leadership Council in New York City,
in which the president championed the idea that same-sex couples should
have every right that heterosexuals enjoy, but seemed to be avoiding
the “M” word. Obama has frustrated gay rights activists by embracing
civil unions but stopping short of endorsing same-sex marriage, saying
his views are “evolving.”

“I really wish he would come out and
clearly support marriage equality for gay couples,” Minter says. “He
didn’t go far enough. I think he’s a great president and a strong
leader, but I really want him to take a stronger stand.”

On the other battle front that could end
up with the Supreme Court, the challenge to California’s same-sex
marriage ban that Olson is involved in, Minter says it is still unclear
whether a district judge’s August 2010 overturning of the ban can be
appealed, since the state has refused to defend the ban. That decision —
whether an appeal can move forward without state support — now lies
with the California Supreme Court, which is expected to hear oral
arguments in September.

Minter says he hopes that those justices
are not subjected to the same political pressure that judges in similar
cases have experienced. For instance, he says, the judges who struck
down Iowa’s same-sex marriage ban were subjected to “blatant
intimidation tactics” by a right-wing group, and some were recalled.

Meanwhile, on the opposite coast, the New
York legislature approved same-sex marriage on June 24, adding a
heavyweight state, both in terms of general population and homosexual
numbers, to the tally of states that have blessed same-sex marriage.

Four members of the Republican majority tipped the scales.

According to Moss, the legal battle to
prevent discrimination against homosexuals can be fought on three main
fronts. The first is the equal protection clause of the 14th Amendment,
which was at the heart of Romer v. Evans, the 1996 Supreme Court
decision striking down Colorado’s anti-gay Amendment 2, the measure that
would have barred local governments from treating homosexuals as a
protected class.

The second main way to combat discrimination against homosexuals, Moss says, is a Roe v. Wade-type of argument based on protecting a person’s right to sexual privacy. In the 2003 case Lawrence v. Texas,
the Supreme Court struck down that state’s sodomy law, ruling that
intimate consensual sexual activity is liberty protected under the “due
process clause” of the 14th Amendment.

The third front on which the gay-rights
battle is being fought is the aforementioned challenge to DOMA — not
just whether the federal government has the right to deny marital rights
to gay and lesbian couples, but whether states should be required to
recognize same-sex marriages from other states.

According to Mindy Barton, legal director
for the GLBT Community Center of Colorado, the U.S. Constitution says
that, in general, states should honor each others’ laws.

“With DOMA, we’ve opted out of the Full
Faith and Credit Clause, and that’s disconcerting,” she says. “We
shouldn’t be able to opt out of certain parts of the Constitution.
That’s a little troublesome.”

Republicans in Colorado, unlike the conservative examples on both coasts, have not been as open to gay rights.

This spring, State Sen. Pat Steadman,
D-Denver, an openly gay Colorado legislator, co-sponsored SB 172, the
Colorado Civil Unions Act. After being passed by the Democratically
controlled Senate, the bill was killed on March 31 in a 6-5 party-line
vote in the Judiciary Committee of the House. (The Republican Party,
thanks to its one-person majority in the House, also holds the majority
in House committees.)

Steadman told Boulder Weekly that he
plans to revive the bill next spring, without many changes. Asked what
might make the Republican-dominated House approve it the next time
around, he says, “Hopefully they’ll be a year older and a year wiser.”

Still, Colorado has made a few pro-gay
strides in the nearly five years since voters approved a state version
of DOMA called Amendment 43 — and turned down a measure allowing
domestic partnerships. The state now has “designated beneficiary
agreements” that can help same-sex couples with estate planning, such as
leaving an inheritance to a partner.

“I think a lot has changed in Colorado since 2006,” Barton says.

Steadman says an intellectually sound —
but practically questionable — approach would be to get rid of
state-sponsored marriage in its entirety and just have marriages
declared by churches.

“How did the government get into the
marriage business in the first place?” he asks. “It’s bullshit. The
government should not be policing marriages. That’s somebody else’s
job.”

By some accounts, it is just a matter of
time before homosexuals enjoy the same rights — marital or otherwise —
as other Americans. Remaining questions include how long it will take,
and on which front the national reform will succeed. Will it be Congress
or the Supreme Court overturning DOMA in the near future? Or will the
tide be turned state by state, until there is overwhelming popular
support that sways the federal powers that be?

“The only way Congress or the Supreme
Court is going to act is when we get critical mass in the states,”
Steadman says. “The tide is really turning. It’s not a matter of if,
it’s a matter of when.”

Steadman says it won’t take a majority of
states to tip the balance, and he acknowledges that not all states are
going to be on board.

“Mississippi and Alabama are not going to be at the forefront of this,” he says.

But Steadman also says there are “some
interesting coalitions coming together on this,” citing the Tea Party,
which opposes government intrusion into private lives.

Some say the concept of equal rights for homosexuals is as American as motherhood and apple pie.

“Why did people come to this country in
the first place?” Steadman asks. “Because of religious persecution in
Europe, right? And people came here to be free and live their lives the
way they wanted to live them and pursue their version of happiness.

“So yeah, this is apple pie. This is what we’re all about.”

Breaking through the binary

Weird sex laws in the U.S.