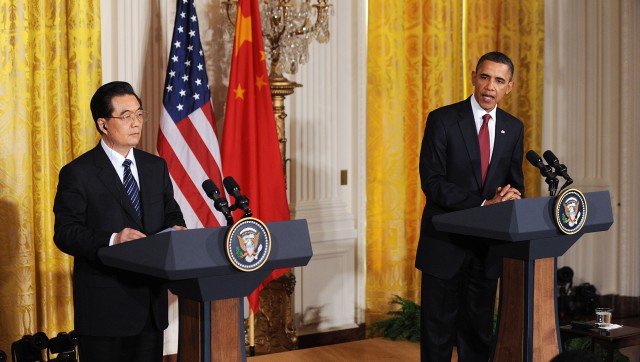 — In a historic joint news conference between the leaders of the world’s two major economic superpowers, President and President of
on Wednesday pledged cooperation on trade, business, human rights and
intellectual property issues while downplaying the underlying tensions
between the two nations.

As the two took questions from American and Chinese reporters, the announced a series of agreements that will increase U.S. exports to by and will support more than 230,000 U.S. jobs, Obama said.

He said that neither country should “view every issue through the lens of rivalry.”

But while the talk was largely of partnership, firm
agreements on a number of sticking points between the two nations,
especially concerning manipulation of its currency on the international market, remain elusive. Both sides pledged to keep working.

“ and share expanding common interests,” Hu said, through a translator.

There “needs to be further adjustment in the exchange rate,” Obama said. “We’ll continue to look for the value of currency to be increasingly driven by the market.”

Asked whether the U.S. should seek to expand its business partnership with
despite widespread criticism of its human rights record, Obama said he
had “been very candid with President Hu about these issues.
Occasionally, they are a source of tension between our two governments.”

But, he said, “We can engage and discuss these
issues in a frank and candid way, focus on those areas where we can
agree while acknowledging there are areas where we are going to
disagree.

“Thirty years from now,” in , Obama said, “we will have seen further evolution and further change.”

Asked directly about human rights record, Hu responded: “ is always committed to the protection and promotion of human rights. has also made enormous progress recognized widely in the world.”

At the same time, Hu spoke of “different national circumstances” between his country and . “ still faces many challenges in economic and social development, and a lot still needs to be done in
in terms of human rights,” Hu said. “We will continue our efforts to
improve the lives of the Chinese people and to promote democracy and
the rule of law.”

And in a slight reproach, he suggested that Obama and must recognize a “principle of non-interference” with internal policies.

Obama stressed that
must make its domestic markets increasingly open to American-made
products as per-capita income of Chinese citizens rises. “As we look to
the future, what’s needed, I believe, is a spirit of cooperation that
is also friendly competition,” Obama said. “There has to be a level
playing field for American companies competing in .

As part of the trade deal, will purchase U.S. airliners.

Obama also emphasized protection of U.S. intellectual property in , where pirating has been rampant. He said Hu had pledged to take “new steps to combat” theft.

It was the eighth time the two leaders have met since Obama took office in 2009. When Obama visited
in November of that year, the two leaders did not take questions from
the press. The two took a handful of questions Wednesday during the
hourlong session, which was slowed by protracted translation
difficulties.

On Wednesday evening, Hu was to be feted at an elegant state dinner at the . On Thursday, he’ll meet with Democrats and Republicans on , where economic policies have come under heavy criticism, before heading to for two days of meetings.