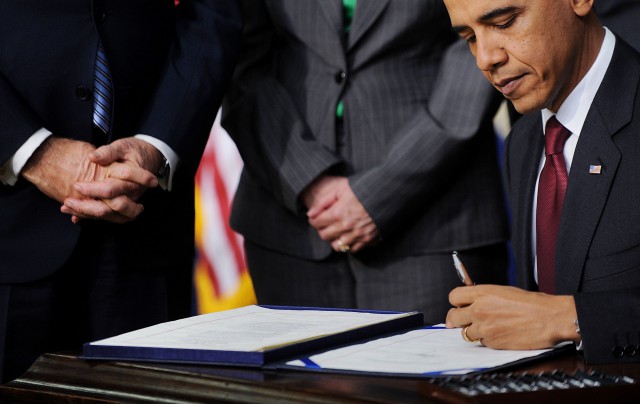 WASHINGTON — President Barack Obama marked the end of
the “long and contentious” debt-limit debate Tuesday afternoon,
lamenting that the “manufactured crisis” has stunted the economic
recovery and promising a return to a jobs-focused agenda.

The president spoke from the Rose Garden moments
after the Senate gave final approval to the deal by a vote of 74-26. The
House had voted for it by a surprisingly comfortable 269-161 margin on
Monday.

Obama signed the measure more than an hour after the
Senate vote, ensuring that the nation is able to continue borrowing
money to pay its bills.

The president called the deficit-reduction measures
paired with the debt-limit increase an “important first step to ensuring
that as a nation we continue living within our means.” But he also said
he would continue to fight for a “balanced” approach when Congress
continues the debate this fall.

“I’ve said it before, I will say it again: We can’t
balance the budget on the backs of the very people who have born the
biggest brunt of this recession,” he said.

The months-long debate has sapped all parties in
Washington of popular support, including Obama. Last week, his approval
rating sank to an all-time low in the Gallup daily tracking poll, at 40
percent.

At the same time, any sense of an economy in recovery
mode seems to have gone out the window because of the uncertainty
sparked by the debt-limit debate.

“While Washington has been absorbed in this debate
about deficits, people across the country are asking what can we do to
help the father looking for work,” Obama said. “That’s part of the
reason that people are so frustrated with what’s been going on in this
town. … Our economy didn’t need Washington to come along with a
manufactured crisis to make things worse.”

Democrats, many unhappy with the terms of the final
accord, are eager to move on from the debate and focus on jobs after
they return from the August recess. Obama signaled that in his remarks,
calling for consideration of various measures, including an extension of
middle-class tax cuts, the adoption of trade deals and a new
infrastructure bank.

“Both parties share power in Washington. And both parties need to take responsibility for improving this economy,” he said.

A fresh indicator of the nation’s economic health is to come Friday with the release of new monthly jobs data.

On the eve of his 50th birthday, Obama is due to fly to Chicago on Wednesday for fundraisers for his re-election campaign.