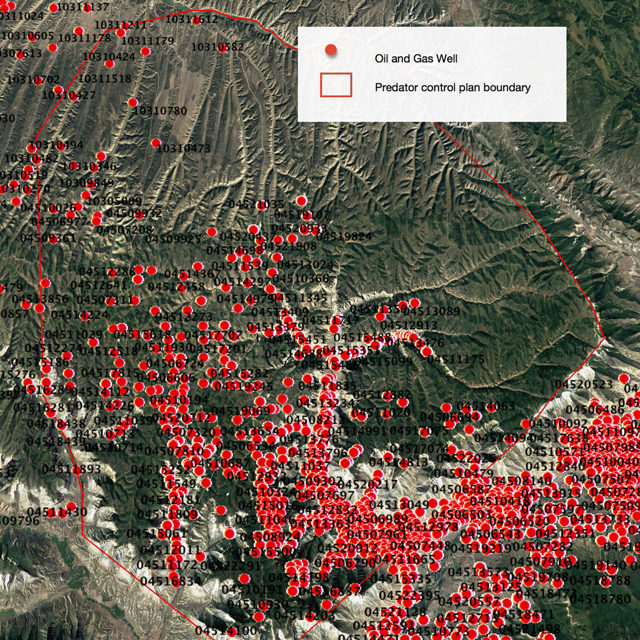 Colorado Department of Parks and Wildlife’s (CPW) $4.6 million predator control plans, which mandate the killing of hundreds of mountain lions and black bears in an attempt to boost mule deer populations on the Western Slope, are presently the subject of two lawsuits filed by WildEarth Guardians and the Center for Biological Diversity.

The lawsuits claim the management plan, which is being implemented by the U.S. Department of Agriculture’s Wildlife Services (WS) branch, is ineffective and doesn’t factor in the oil and gas industry’s effect on mule deer populations in the Piceance Basin and Upper Arkansas River.

A new study, “Mule deer and energy development — long-term trends of habituation and abundance,” published in the journal Global Change Biology, indicates the impacts of oil and gas activity can last long past the initial development stage. And according to the study’s authors, this finding contradicts many National Environmental Policy Act (NEPA) documents that guide federal land use on millions of acres in the West and which to date,  have described oil and gas activities as having a short-term impact on wildlife.

Instead, the researchers found over the course of their 15-year study that deer didn’t adapt to oil and gas activities, and the avoidance of oil and gas infrastructure by deer, along with the loss of their habitat as a result of such activities, are long-term effects that can be associated with significant declines in deer populations.

Researchers of the new study found mule deer populations declined by 36 percent during the oil and gas development period, despite aggressive onsite mitigation efforts. They also noted a 45 percent reduction in deer harvest by hunters.

According to Barry Noon, a professor in the Colorado State University Department of Fish, Wildlife and Conservation Biology, these findings could safely be extrapolated to mule deer populations in both the southern and northern Rocky Mountain ecosystems.

The study’s authors further note oil and gas impacts on deer populations are concerning because some of the largest gas fields in the U.S., such as Colorado’s Piceance Basin, overlap critical winter ranges for the animals.

Furthermore, the study states oil and gas impacts weren’t fully offset through mitigation or best management practices, and that given the limitations of such mitigation, “strategically foregoing oil and gas leasing or reducing the intensity of development on critical habitats” is likely the most effective approach to averting the oil and gas industry’s impacts on deer populations.

The researchers also claim that because the NEPA process is based on full disclosure of the potential impacts from a proposed action, future impact assessments should disclose that oil and gas activity impacts to mule deer might well be long-term and perhaps irremediable.

It would appear, based on the results of this new 15-year study, that a significant re-evaluation in the way oil and gas impacts on deer are regulated under NEPA is needed. If that’s the case, it would have significant regional consequences.

Counter to the claims of CPW and WS, Rep. Steve Lebsock (D-Northglenn) told Boulder Weekly that CPW officials have more than once conceded to him that the survival rates for mule deer fawn up to 6 months old have actually been increasing in the Piceance Basin over the past year.

CPW claims this is not true, and denied BW’s open records request for documents detailing the information.

Lebsock says he questions “what exactly is driving this policy decision to kill mountain lions and bears without peer review from leading wildlife biologists from [Colorado State University] or national wildlife organizations.”