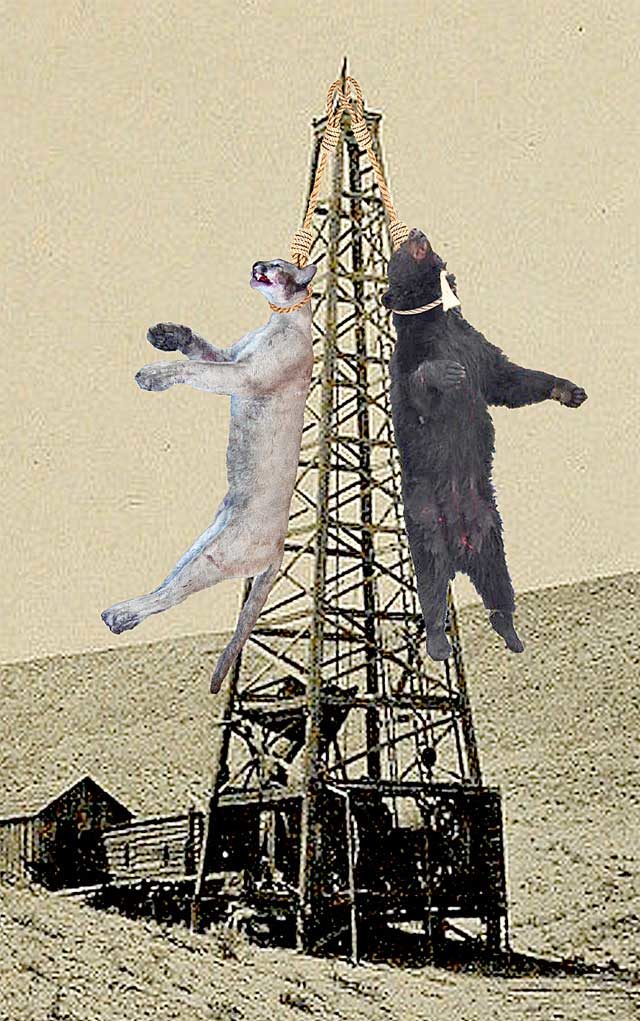 Editors note: Colorado Parks and Wildlife’s two predator management plans have been ensnared in contention and doubt regarding their scientific legitimacy and underlying purpose since being unanimously approved by CPW Commissioners in December 2016 (see Boulder Weekly’s Off Target: Parts 1 to 7). The two plans in question are the Upper Arkansas River and Piceance Basin predator control plans.

The Colorado Department of Parks and Wildlife’s (CPW) predator plans call for the killing of Colorado’s iconic mountain lions and black bears in what is alleged to be an attempt to more rapidly increase mule deer populations in areas where they’re already steadily increasing. Critics of the plans assert that cumulative impacts from oil and gas extraction are far more likely the reason for the mule deer’s struggles than predation. As a result of these disparate opinions, two lawsuits challenging the plans have been filed.

Wilcox told Boulder Weekly that any deference given to CPW because of their agency status would be wrong because the predator plans violate Colorado’s trapping ban/Amendment 14, which was passed by voters in 1996.

When asked for its position on the suit, CPW representatives told BW the agency isn’t commenting, citing the ongoing litigation.

WEG alleges CPW’s plans violate the 1996 trapping ban and its implementing legislation because the structure of the amendment indicates snaring wildlife for the purpose of killing it later is not covered by the amendment’s scientific research exemption to killing that CPW claims justifies its actions. CPW intends to snare and trap the bears and mountain lions and is claiming this is a non-lethal activity allowed under the law. But the agency intends to subsequently kill the animals it has caught. CPW is acting on the assumption that this two-step process somehow fulfills the voter’s intentions behind Colorado’s trapping ban/Amendment 14.

WEG also argues when voters passed the amendment, they intended to ban activities like the trapping, snaring, and killing that will occur under CPW’s predator plans.

In addition, WEG says the ban made illegal what CPW is presently attempting to do — intentionally killing wild animals they’ve snared or trapped — arguing the scientific research exemption, which is part of a larger group of other exemptions, are uniformly non-lethal. And by using the words “non-lethal” in the amendment’s nonlethal methods exemption clause and nowhere else, WEG argues, “voters and the Legislature made clear that wildlife are not to be taken by snares under these exemptions for the purpose of killing them.”

WEG also claims the CPW commission never determined whether CPW’s plans met the regulatory definition of scientific research before approving them. According to WEG, the plans don’t meet the definition of “bona fide scientific research” because they are being carried out for the purpose of wildlife management and not for the acquisition of new and relevant knowledge. They note that the plans’ designs and their capability to provide strong scientific inferences that would pass peer review and meet the requirements for publication in a peer-reviewed scientific journal simply don’t exist. The WEG lawsuit also claims the killing of bears and lions will not be implemented in a humane fashion by qualified personnel, aka the USDA’s Wildlife Services (WS).

WEG says the true purpose of CPW’s plans are clear from the way they reference them, presenting them to the public as “predator management plans” and to the CPW commission as “predator control plans.” WEG argues these titles indicate a fatal flaw in  CPW’s claims and reveal the agency’s true motivation, which is to conduct trapping, snaring, and killing as part of their predator control/management efforts, and not as a method to further scientific research.

This idea that the true intent of the plans is being conveyed by the title appears to be confirmed in an e-mail correspondence obtained by BW between a CPW public information specialist and CPW leadership. The email exchange shows Bob Broscheid, CPW director — in an apparent reference to Denver Post Environmental Reporter Bruce Finley’s use of the term “predator control” in an article reporting on the plans — stating, “We need to get them to change the name to a research project that includes predator removal!” Broscheid’s request appears to expose CPW leadership’s belief that the legal implementation of the predator plans may hinge as much on what they are called as how they are actually carried out.

In his reporting in the Post, Finley wrote that CPW didn’t oppose 15,000 new oil and gas wells in the Piceance, despite CPW’s own research showing the oil and gas industry’s destructive impacts to deer and other wildlife in the area in question. And in the internal CPW correspondence, Jerry Neal, CPW public information manager, suggests CPW make it known through the Denver Post that CPW has no regulatory authority over oil and gas extraction, but can only suggest mitigation. And while this is technically true, Neal’s assertion appears an attempt to publicly free CPW of any responsibility regarding oil and gas impacts to deer and their habitats, and thereby work to legitimize CPW’s predator control plans.

The emails also show Neal questioning the veracity of Finley’s reporting, accusing him of only using quotes that fit his “narrative/agenda.” And in his response to Neal, Broscheid agrees.

When asked for comment by BW, Finley said that the three articles he wrote about CPW’s predator control plans stand, adding that CPW never challenged the fairness or accuracy of the Post’s reporting.

And finally in its brief, WEG states CPW’s current deer population goals are based on historical herd potentials from the 1980s and not the habitat’s current, depleted capacity to support mule deer populations, which CPW has previously stated have declined due to oil and gas operations. In making its point, the brief cites correspondence in which CPW Wildlife Researcher Eric Bergman states, “I don’t know of any biological evidence that supports the use of our historical herd objectives as a surrogate for carrying capacity.”

Bergman’s statement appears to undermine the very foundation of CPW’s plans, which are based on the agency’s claims that predator control might boost deer populations if those populations existed in habitats that could carry more deer. But if those lands can’t support such populations as they did in the 1980s, which was before the massive impacts to wildlife habitat as a result of oil and gas and residential development, CPW’s killing of lions and bears appears to be a needless and destructive act.

The brief also quotes Bergman saying, “It seems rather tenuous to use a sociopolitical objective as difference between these two numbers,” appearing to assert CPW’s plans are attempting to trump biological reality for the sake of appeasing a narrow constituency.

In the end, WEG’s brief argues that CPW refuses to acknowledge deer population declines in the predator control plan areas were actually caused by degraded habitat conditions primarily as the result of oil, gas and residential development. WEG alleges CPW is attempting to distance itself from its past admissions that this degraded habitat argument is the truth and is instead choosing to scapegoat lions and bears. Among other things, the brief concludes, “Superficial references to science cannot remedy this fundamental shortcoming.”

CPW’s response is due to the court on Sept. 11, approximately three months before the Upper Arkansas River predator control plan is set to begin in January 2018.