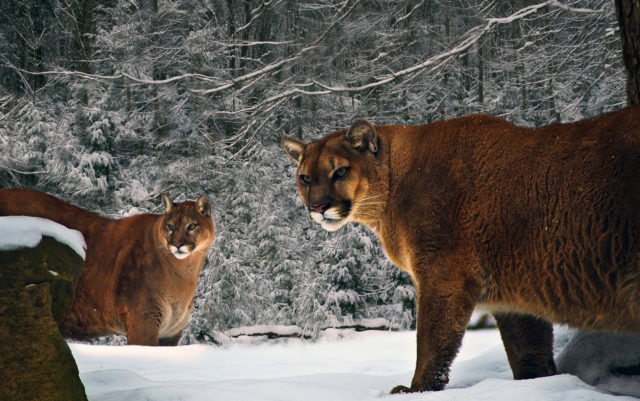 (See * and ** at end of article for clarifications)

As of Feb. 9, it appears there is yet more research the Colorado Department of Parks and Wildlife (CPW) will need to ignore in order to continue with its controversial Piceance Basin Predator Control Plan. As has been previously reported in this series, the plan calls for the killing of mountain lions and black bears to increase mule deer populations.

Not only would this be devastating for mountain lions in the area but also for the larger ecosystem, as CPW researchers have found this apex predator has an impact on the prevalence of chronic wasting disease in Colorado mule deer.

Patrick Lendrum, PhD candidate in the CSU Department of Fish, Wildlife and Conservation Biology, studied the impacts of oil and gas extraction on carnivore populations in the Piceance, where he has been working for the last decade. Lendrum presented his findings to the public on Feb. 9. The researcher says studies of oil and gas extraction impacts on carnivores are scant. In order to study those impacts, Lendrum used non-invasive and non-lethal camera traps, which he says are well-suited for elusive animals such as bobcats, coyotes and mountain lions because they offer a glimpse into their undisturbed natural behavior. This method appears in sharp contrast with CPW’s Piceance plan, which calls for the killing of mountain lions supposedly in its pursuit of science.

Lendrum utilized 80 camera traps across 300 square kilometers between 2015-2017. From these cameras he gathered 37,540 camera trap days. What he found was shocking. * Based on winter time population estimates when mountain lion populations are expected to be at their highest, Lendrum observed mountain lions only twice, once in 2015 and once in 2017.

The Piceance plan area is 1,277 square kilometers. If Lendrum’s near site-specific **wintertime findings were applied to this area and if all things were equal, it’s possible there could be as few as nine mountain lions currently residing there. But CPW’s current kill quota for the area allows up to 15 lions to be taken, according to Chuck Anderson, CPW’s principal investigator for the Piceance plan. This figure doesn’t include hunter harvest and mountain lions killed due to livestock conflicts, and there are numerous livestock ranchers in the immediate vicinity who do both.

In all fairness to CPW, the area Lendrum measured is considered winter range and the area covered by the Piceance plan is considered summer range for mountain lions, so there could be differences in predator populations, but this is as close to a site-specific mountain lion population estimate in the area yet produced.

When CPW’s kill quota of up to 15 mountain lions for the Piceance plan area is taken into account, it exposes the potential negative impacts the plan is likely to have on the region’s ecosystem, which as previously reported in BW’s Off Target series, is already riddled with the cumulative impacts of oil and gas extraction.

Based on Lendrum’s new research, instead of mountain lions causing mule deer herds to decline, it seems more likely the degradation and fragmentation of habitat as a result of oil and gas extraction is causing the population of both mountain lions and mule deer to decline.

Lendrum says that even in the production phase of oil and gas extraction, which follows the noisy and disruptive drilling phase, he found that negative impacts on mountain lions persist. Lendrum notes this finding is inconsistent with current National Environmental Policy Act (NEPA) assumptions, which see oil and gas extraction impacts as lasting only as long as the drilling phase is ongoing.

Lendrum’s findings are similar to those from a study in Wyoming where mule deer populations declined and never recovered in areas of intense oil and gas extraction even after the drilling phase subsided (see BW’s “Off Target: Part 7,” Jun. 29, 2017).

Present in the audience at Lendrum’s Feb. 9 presentation was Barry Noon, CSU professor in the Department of Fish, Wildlife and Conservation Biology. Noon asked Lendrum to project forward in time and describe what he expects will happen based on his findings considering that thousands of new oil and gas wells have been approved in the Piceance Basin.

“I expect like most situations, where there’s less habitat we’ll have less species — less deer, less carnivores on the landscape,” Lendrum responded.

And then there is the potential impact on chronic wasting disease (CWD).

At the CPW Commission meeting on Feb. 8, staff presented results of their CWD testing in one of the Piceance Basin mule deer herds.

According to Matt Eckert, CPW terrestrial programs supervisor, the deer herd, including one of the game management units of the Piceance plan, is experiencing CWD prevalence at 15 percent, which he said is a tenfold increase since 2003. Eckert says this means approximately 7 percent of adult bucks and 3.5 percent of adult does will die from CWD each year.

It should be noted that this low prevalence in 2003 was before the Piceance oil and gas boom. But as has become the norm at the agency since the Parks and Wildlife merger in 2011, staff failed to mention this potentially important factor.

CPW is expecting CWD prevalence to increase in the Piceance and appears poised to issue increased late-season buck licenses, a move it believes could  decrease CWD prevalence.

But neither the CPW Commissioners, staff, nor any member of the public at the meeting mentioned the lack of predator populations as being potentially relevant to the increasing prevalence of CWD in mule deer despite the findings of its own recent research, indicating this is likely a factor.

A 2009 study led by the Colorado Division of Wildlife (now the Wildlife section of CPW) in Northern Colorado found that mountain lions actively selected CWD-infected deer when targeting adult mule deer as prey, whereas hunters tended to select and thereby remove deer not infected with CWD. Simply put, according to CPW’s own research — or at least the former Division of Wildlife’s — mountain lions are more effective at selecting and removing CWD-infected deer from the population than are hunters. Yet despite this research, CPW presented a management solution based only on increasing hunter harvest in an area where CPW is also simultaneously spending hundreds of thousands of taxpayer dollars attempting to reduce mountain lion populations.

Such conflicting actions appear contradictory to CPW’s own research. As a result, critics of the Piceance plan have questioned whether CPW is more concerned with concealing the cumulative impacts of oil and gas extraction on mule deer from the politically important sportsmen/outdoorsmen demographic of voters  than actually protecting these deer that are vital to the preservation of these swing voters’ hunting heritage.

Yet because CPW and the Office of the Attorney General have refused multiple requests and appeals by Boulder Weekly to release documents under the Colorado Open Records Act detailing the killing of bears and mountain lions as part of the Piceance plan during the months of May and June 2017, Coloradans can’t judge for themselves whether or not the plan is a legitimate use of public funds on public lands to manage the public’s wildlife. Among other things, CPW’s refusal to release this information denies Coloradans access to the knowledge of whether or not female bears or mountain lions with cubs were properly treated and not killed in 2017 by accident or as collateral damage, which is prohibited by the Piceance plan.

Though not officially confirmed by CPW or Wildlife Services, BW has been told by several sources that in May and June 2017, WS killed 24 black bears but no mountain lions as part of the Piceance plan. As with mountain lions, CPW is basing its kill numbers for bears on an estimate that is not based on site-specific population information. And as for mountain lions, CPW and WS can’t kill what is already gone.

One presence, however, that is certain in the Piceance Basin is oil and gas drilling. As of Feb. 13, the Colorado Oil and Gas Conservation Commission (COGCC) has permitted 1,827 new oil and gas wells in Garfield and Rio Blanco counties where the Piceance plan is scheduled to begin again in May. This increase in drilling, combined with CPW’s ongoing refusal to acknowledge oil and gas extraction’s impacts to bear, deer and mountain lion populations, may well be having severe impacts to the wildlife and habitat of the Piceance Basin. The real remaining question is whether or not the public will continue to allow this questionable killing of predators to proceed.

A lawsuit filed by WildEarth Guardians attempting to halt the plans is pending. CPW declined to offer comment for this article.

*This paragraph was corrected after publication to reflect that Lendrum saw only two mountain lions during the winter season when their numbers would have been expected to be at their highest. Other lions were observed during summer months. The original paragraph indicated that the researcher saw only two lions over the entire Three year period. Also the year 2014 was corrected to read 2015.

**As with the above, this sentence was changed after publication to clarify the numbers used in the writer’s extrapolation were only Lendrum’s “winter” season numbers from the public release of his findings.