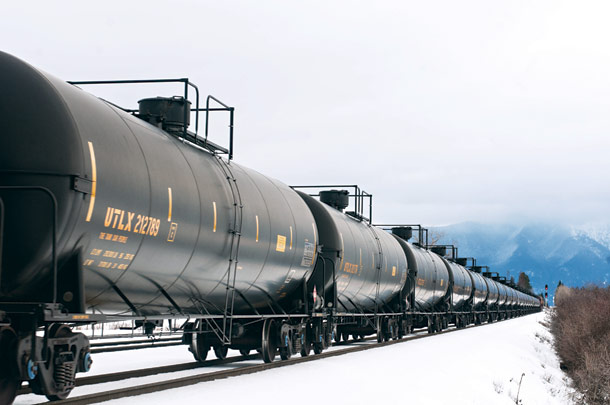 Courtesy of The Department of Transportation

Last week’s Boulder Weekly cover story “Oil Boom” covered the proliferation of trains carrying volatile crude oil in outdated oil tanks through the hearts of Longmont, Boulder and Louisville. With industry estimates of an oil boom in the nearby Niobrara shale formation, Boulder County residents can expect that the risk of a potential explosion from an oil train will increase over the next decade.

On the day that story was published, documents were leaked from the state of Washington’s Military Department that showed the U.S. Department of Transportation and U.S. railroad companies like Burlington Northern Santa Fe (BNSF) and Union Pacific pressured states to keep information about oil trains concealed from the public.

And so this brief part II to “Oil Boom” will take a look at why railroads are not required to tell citizens about oil trains, why this information needs to be a secret at all and how railroads are now working to enact soft oil transportation standards in order to save billions in revenue.

Railroad companies have never been required to tell citizens, municipalities or states the contents of their train cars. Then, in May, the U.S. Department of Transportation ordered railroad companies to disclose to state emergency responders how many trains carrying one million gallons or more of crude oil from the Bakken shale region in North Dakota were coming through that state. This came after nine oil trains, many carrying Bakken crude oil, exploded or derailed in the last 12 months in the U.S. and Canada.

In response, railroad companies asked states to sign a confidentiality request form that would keep that information from being passed on to the public. Some states like California, New Jersey and Virginia signed the agreement. Colorado did not sign the agreement, but did ultimately decide to keep the information confidential.

Conversely, some states, such as Washington, North Dakota and Wisconsin, decided to make the information public. This was not without contention from the rail companies. When Montana said it would do the same, BNSF promptly wrote to the state that it would consider legal action to keep the information hidden.

And in Washington, one state official wrote in an email (obtained by DeSmogBlog), “looks like UP is trying to put the burden on us vis-à-vis information transfer on oil trains,” noting that Union Pacific’s confidentiality request claimed states were requesting information about Bakken crude oil shipments, instead of that railroads are now required to share that information.

All this fuss from railroad companies concerns just one mandate on one very large amount of oil from one of several drilling areas nationwide. And that information doesn’t need to be sent until 30 days after trains pass through the state.

This mandate is effectively irrele vant for Boulder County. Crude oil shipped through the county comes from the Niobrara in Northern Colorado. Transporting this crude, like everything that’s not one million gallons of Bakken crude, does not require notification even though it can still overheat and explode and it is still shipped in outdated, dangerous tanks.

What is relevant is that the Niobrara shale region has been deemed by the oil and gas industry as the “next Bakken” region, so legislation and precedent for that region will affect how crude oil is transported through Boulder County in the future.

Now, railroads can keep the majority of oil train information hidden from the public because they have help from federal and state officials.

For instance, in ordering railroads to share Bakken crude oil train information with local emergency responders, the U.S. Department of Transportation also encouraged states to keep that information from the public in a FAQ that accompanied the emergency order.

“A lot of that is the historic security concerns that were started following 9/11,” says Davis. “I know that is something that on the security side, that from a federal standpoint, they’re taking a look at and reviewing that process.”

Davis added that he was “not sure” if any actual threats to Union Pacific oil trains have been recorded, but that the security detail on crude oil transport via rail is “massive” and involves national, state and local authorities.

According to Dave Hard, director of the Colorado Division of Emergency Management, the state of Colorado is keeping what little oil train information it does receive hidden from the public not because of security concerns but because it is “business confidential.”

“The original guidance we received from the Department of Transportation […] made it clear that at the time, the federal D.O.T. considered it security sensitive and business confidential,” Hard says.

“They still maintain business confidentiality viewpoints. The state is still honoring that [all oil train information] is not for public disclosure, it is for the purposes of preparing [emergency response personnel],” Hard says.

Railroads are also subject to the Emergency Planning and Community Right-to-Know Act, which requires them to report the transport of hazardous materials to local and state emergency responders. But, for some reason, petroleum products including crude oil are exempt from this mandate.

The bottom line is that railroads are privately owned and not required to notify anyone of the contents of their trains. They are, at least, required to make their transport of volatile materials safe.

But railroads like BNSF, Union Pacific and CSX said implementing these safety measures would be too costly.

In a presentation to the White House Office of Information and Regulatory Affairs, which will amend and codify the safety standards introduced by the Department of Transportation, presenters for the railroads laid out the costs of implementing moderate safety measures.

First, railroads would pay $2.8 billion for capital improvements to railways across the country. Reducing the speed of trains would call for oil companies to build more tankers to the tune of $1.5 billion in order to main tain supply quotas. Reducing train speed would also cost the railroads themselves about $630 million per year because they’d have to pay for additional crew, fuel costs and “lost productivity of track maintenance workers.”

Train speed and outdated tank cars are by far the most common cause of derailments and explosions. Tank cars are not built for modern crude oil and train speed has many times caused modern volatile crude oil to overheat and explode.

BNSF went on to say that implementing these safety measures would take about four years and would result in “the immediate loss of existing business” and growth would be stifled.

Railroad officials and lobbyists are currently working beside federal lawmakers to carve out the new safety and notification rules for crude oil by rail transport. Initial regulations could come as soon as this year.