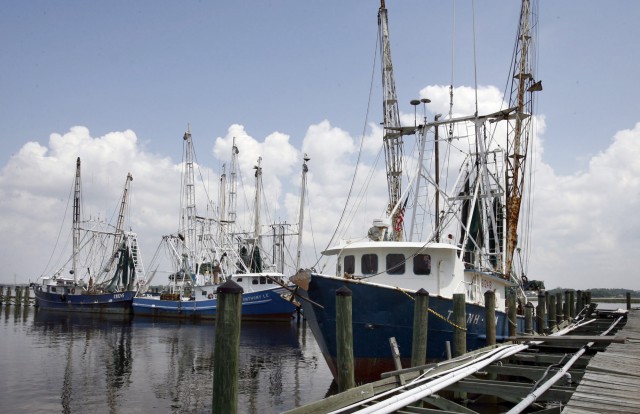 When sees thick, gooey oil roll ashore on waves from the , he wonders how long the state known as the Sportsman’s Paradise will live up to its name.

Just a year ago, he was thriving in that
setting. His Cajun Fishing Adventures business was sending out 12
charter boats a day, his lodge was always full, and he was in demand
during the fall as a duck-hunting guide.

His part of the world has taken a direct hit from
the Deepwater Horizon oil spill that is spewing 60,000 barrels of oil
into the Gulf daily.

And Lambert is fully aware that there is big trouble in paradise.

“This is a special place, a national treasure,”
Lambert said in a telephone interview. “What we have here, you won’t
find anyplace else in the world.

“I’ve fished and hunted here my entire life and I’m
very attached to it. To see it dying before my very eyes, it makes me
literally sick.”

Like many others, Lambert watched his life come to
an abrupt halt when the Deepwater Horizon oil rig exploded this spring
and began gushing oil into the .

Within weeks, that oil began washing ashore in , not far from Lambert’s base of operation along the Gulf.

Many of his favorite fishing waters were closed
because of the spill. His charter business screeched to a halt. And
every time he took a walk on the beach, he found troubling signs.

“I see thousands of dead sea clams washed up on the beaches,” Lambert said. “And there’s a lot of dead grass already.

“Well, the fish and ducks feed on those surf clams. And that grass is their habitat.

“To me, it shows that the Gulf is being affected
from the bottom up. Everyone sees the oil floating on the surface and
the wildlife that’s being affected.

“But it’s the oil that’s below the surface that has a lot of us worried. It could affect the entire ecosystem down here.”

Lambert’s life already has indelibly changed. What
should be his busy time of the year is now filled with idle hours. And
constant worry about the future.

“I’m still catching fish in the areas that are still
open, but there’s no business. No one wants to come down here when this
is going on. And I can’t blame them.

“They could make plans, pay for plane fares, and get down here and find that their fishing water has been closed overnight.

“Things are changing by the day down here.”

Lambert certainly isn’t alone in his despair over
the situation, which scientists say could become one of the greatest
environmental disasters in the history of .

Gulf states such as are rich in
coastal wetlands. There are thousands of acres of grass waving in
shimmering marshes, a perfect setting for everything from game fish to
migrating waterfowl.

More than 400 species of fish and wildlife live in the coastal setting, and the region supports a fishing industry. In 2008, more than 3 million people took recreational fishing trips in the Gulf states.

But today, much of that is clouded by the oil that is being washed ashore.

The oil is believed to have already caused the
deaths of 1,317 birds, 441 sea turtles and 52 mammals, with many others
collected and brought to animal rescue centers.

No major fish kills have been reported yet, but
biologists worry about long-term effects. Oil in the water could affect
oxygen levels in water, eggs and the physiology of the fish.

Biologists also worry about the loss of habitat for
both fish and wildlife. The oil that already is flowing into marshes
could kill critical grass that everything from fish to birds rely on.

Officials with , a
non-profit conservation organization dedicated to preserving and
enhancing waterfowl habitat, are concerned that the oil spill will
affect migrating waterfowl this fall and winter. The area that already has taken a hit supports one of the nation’s largest concentrations of migrating ducks.

In the latest survey by the ,
78 percent of fishing businesses surveyed indicated that business was
down an average of 56 percent from what it was a year ago.

Seventy-six percent of those surveyed said their businesses wouldn’t survive without financial assistance.

Federal officials worry that 36 national wildlife refuges could be affected by the spill.

“What we have here is big nature colliding with big oil,” said , president of the . “And unfortunately, big oil will win in this collision.”

The impact of the oil spill on wildlife already is being felt.

Oil-covered birds and sea turtles are being collected daily by rescuers, and a thick brown slick laps up against marsh grasses.

But the worst may be yet to come.

By late August, thousands of ducks will be streaming into coastal , one of the nation’s most significant wintering grounds for migrating waterfowl.

If oil covers many of the marshes they are accustomed to using, big problems could result.

“This is a “hold-your-breath” situation,” said , director of conservation for . “The oil hits the salt marshes first. The fresh-water wetlands that the ducks use are protected.

“But if we get some hurricanes and strong winds,
that oil could make its way into the fresh-water marshes. And that
could cause some major problems.

“Right now, there’s just a lot of uncertainty. We’ve never had to deal with a problem like this.”

If the oil flow isn’t stopped, Moorman foresees problems that would start with the bluebills.

“Thirty to forty percent of the continent’s
bluebills winter in this region,” he said. “They will gather in huge
rafts on the Gulf, feeding on dwarf sea clams.

“There’s a possibility that we could see birds could pick up oil or their food source could be affected.”

On the interior marshes, large numbers of gadwalls, teal, wigeons, shovelers and ringnecks also could be affected.

“I don’t know if it would be so much direct
mortality as it would be physiological damage or loss of habitat,”
Moorman said. “The impacts could be felt for years.”

The has discussed creating safe grounds for waterfowl to feed in coastal marshes and inland.

Conservation groups plan to work with private
landowners to flood crops and open more ground to attract migrating
birds away from the oil-affected marshes.

But the clock is ticking.

“We don’t have a lot of time,” Moorman said. “The migrants start showing up in late summer.”

So what can be done?

BP, which owns the oil rig that caused the problem,
has coordinated efforts to put out miles of boom to stem the tide of
oil and has put gallons of dispersant in the water.

But ultimately, Mother Nature is in charge now.

This is storm season in the Gulf. The first
hurricane, Alex, largely missed the oil-spill zone, though it caused
containment crews valuable time on the water because of heavy waves.

The next time, people in the Gulf might not be so lucky.

“The thing that really scares us is the future,”
Lambert said. “Hurricane Katrina was bad, but at least we knew what we
were dealing with.

“The day after our electricity was back, we were back on the water, fishing.

“After this oil spill is done, we’re not sure what will be left.”

Visit The Star Web edition on the World Wide Web at http://www.kansascity.com.