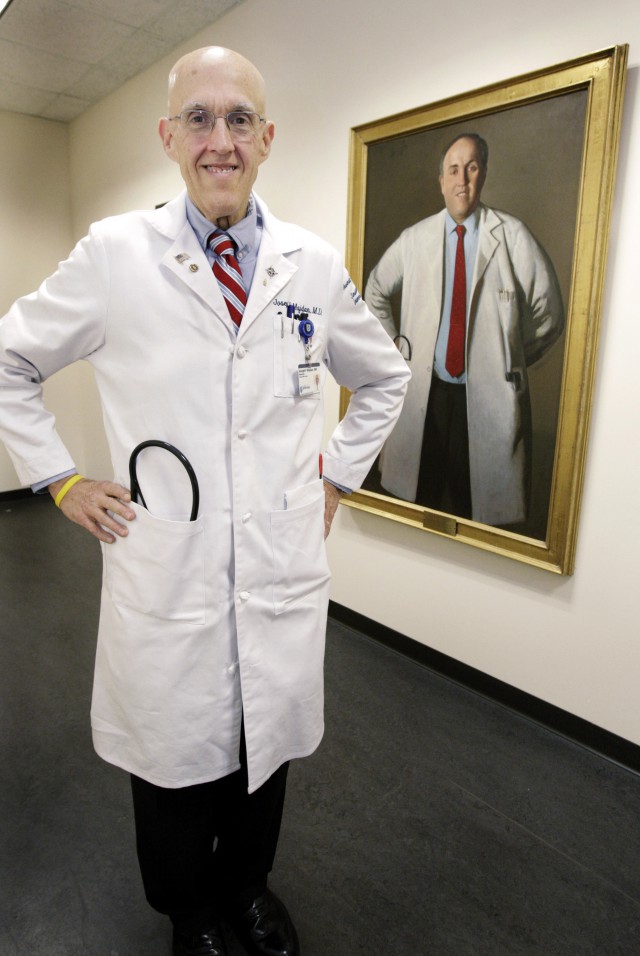 — It is perhaps telling that waited until he was thin to vent his frustration at fellow doctors who made his life miserable when he was fat.

The cardiologist and assistant professor will say
only that the poignant essay he has written for the Annals of Internal
Medicine — “Memoirs of an Obese Physician” — was a long time coming.

“I’ve always thought about writing this article
because it haunted me, and it was a story that I think had to be told,”
he said last week in his office at ,
where he was surrounded by pictures of his family, of his dogs, and of
him when he looked twice as big as many of his friends. He said a
combination of improved self-esteem and encouragement from his
nutritionist led him to finally finish the article he started 10 years
ago.

In his essay, he recounted a series of insensitive,
even abusive, comments over the years from colleagues who seemed to
have little understanding of obesity or compassion for those who
struggle with it.

During Majdan’s residency, a classmate at another
hospital called to ask whether she could borrow his white intern pants
to project slides onto during a skit. She said she thought it would be
“hilarious.” He thought it “insensitive and callous.”

Jefferson’s Class of 1986 chose him as the subject
of its class portrait, the highest honor a faculty member could
receive. When it was done, another doctor told him: “You look too fat
in the portrait. You know, they should only paint portraits of those
who had done something worthwhile for the university. How could you
with your size?”

He heard more than once of doctors who would not refer patients to him because of his weight.

Lest you think things have gotten markedly better,
Maj dan said a fellow doctor chastised him less than two years ago:
“Aren’t you disgusted with yourself?”

Majdan, 60, who would not disclose his weight, has
won multiple teaching awards. He still sees patients and is director of
professional development at the medical college. He works with medical
students who are having interpersonal problems. He loves his job, and
he doesn’t think the prejudice has changed his career path. But he does
think his colleagues’ mean-spirited comments hurt his pride and lowered
his confidence. He wonders how these attitudes affect the large numbers
of patients who also have weight problems.

Majdan said he has great faith in the medical
profession as a force for good. “I believe that this has to change,
this prejudice toward obesity and obese patients, and I have such faith
in the future of medicine that I think this has to be addressed,” he
said.

He said most people would never say such cruel
things to someone of another religion or ethnic group. “Obesity lives
in a politically correct free zone and is the last … prejudice openly
accepted by society,” he said.

He understands that doctors can be frustrated by
their patients’ failure to lose weight, but he sees it as no worse than
many other difficult-to-treat diseases. “My fellow colleagues are
understanding of cancer even when it recurs and recurs, and they’ll
say, ‘Well, that’s the disease,'” he said.

, a endocrinologist who is president of the ,
said he is 40 to 50 pounds overweight and has always been on the heavy
side. He said fellow doctors have not made hurtful comments to him and
he doesn’t know how common that kind of behavior is.

In 2003, , now director of the at ,
conducted a survey of primary-care doctors about obesity. More than
half viewed obese patients as ugly and noncompliant. A third saw them
as weak-willed and lazy.

Foster said he doubts that attitudes have changed
much, although doctors might be more careful about what they say now.
He doesn’t think doctors are any worse than people in other jobs. “All
professions share some core common beliefs, and they tend to center on
willpower and discipline,” he said.

Obese people themselves also have negative attitudes toward those who are overweight, he added.

, director of the at the , worked with Foster on the survey.

He said he believes researchers will eventually
discover connections between genes and most severe obesity. Your weight
is more complicated than how much you eat and exercise, he and Foster
agreed. Different bodies burn calories at markedly different rates.
That means some people really do gain weight a lot more easily than
others. People who are seriously overweight may also experience hunger
differently or respond more intensely to the taste of food than people
who are not obese.

Neither thinks that doctors should be held to a higher standard because they’re giving patients health advice.

That, Foster said, would reinforce the idea “that
you can attribute somebody’s skill as a physician, as a writer, as a
singer, as a parent based on their body weight. It’s preposterous.”

Wadden thinks doctors should exercise and eat
healthy food, but that won’t guarantee they’ll be thin. He thinks
doctors who have had a hard time with their own weight are likely to
empathize with overweight patients, and Majdan agrees.

Over the years, Majdan has tried lots of diet
programs, and he has succeeded more than once in losing lots of weight.
But, like most people, he gained it back.

Majdan, who is 6-foot-3, says he is now at a healthy
weight and has been on a maintenance program for almost a year. He
would not say where his weight topped out, but the pictures on his wall
show a very large man. Majdan says he would have been called severely
obese.

He’s keeping the weight down now with medical
follow-up; he’s never done that before. He sculls and rides a bicycle.
He eats the same food every day, starting with a breakfast of two
egg-white omelets and tomato at the . He never has sugar or bread.

In the past, he just kept quiet when doctors said
things he found hurtful. He admired doctors so much that he took their
criticism to heart.

He plans to speak up now. “Sometimes we have to teach other people how to treat us,” he said. “From now on, I call them on it.”