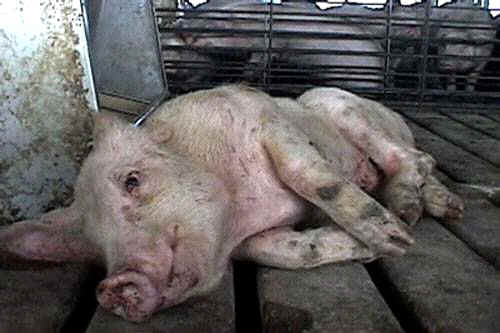 People for the Humane Treatment of Animals

The U.S. Food and Drug Administration is no stranger to allegations of under-regulation, but among recent criticisms is the agency’s repeated approval of a series of veterinary drugs based on ractopamine, a growth-producing supplement that has U.S. nonprofits filing lawsuits against the agency.

Ractopamine isn’t new to livestock farming in the U.S. The FDA first approved the drug for commercially raised pigs in 1999, and later permitted its use for cattle and turkeys. The drug mimics stress hormones, causing animals to gain lean muscle weight rather than fat in the final weeks before slaughter.

However, a handful of consumer advocacy, animal health and environmental groups say the FDA has never proven that ractopamine is safe for the environment, animals or humans. As a result, a pair of lawsuits against the FDA — both filed in the U.S. District Court for Northern District of California in early November — seek to reverse approval for 11 ractopamine-based drugs approved since 2008 and force the FDA to conduct the appropriate environmental review required by law.

“[But the FDA has] regulations that say because of confidential business information on pharmaceuticals they don’t have to disclose that environmental review to the public until after they’ve approved the drug,” says Tomaselli. “That takes away the public’s ability to be able to respond and provide additional data they have, be that public studies or otherwise. So the FDA is only looking at the pharmaceutical industry’s data.”

For eight of the 11 drugs targeted in the lawsuit, Tomaselli says the FDA conducted no environmental analysis. For the last three drugs, the agency used a shallow environmental assessment developed by the pharmaceutical company that developed the drug, Elanco, but never looked at public health and environmental effects.

Elanco admits in their environmental analysis of ractopamine that it is “slightly toxic to aquatic invertebrates and moderately toxic to plants,” but also that there was no measurable data submitted to address chronic exposure.

“Estimates made using acute exposure and toxicity data indicate that chronic toxicity is not expected but suggest a possible chronic exposure risk from incremental increases in ractopamine hydrochloride from multiple site uses in cattle and swine feed,” the statement reads. “There is a high amount of uncertainty associated with this observation.”

Despite widespread use of the drug in U.S. livestock, ractopamine has been banned or restricted in more than 150 countries, resulting in many nations refusing to import American meat from animals fed ractopamine. Among those who prohibit the drug are China and the European Union, who together produce and consume the majority of the world’s pork.

In July 2012, the Codex Alimentarius Commission, the foodstandards body for the United Nations, narrowly voted to adopt a limit for ractopamine residues found in meat products — the vote was 69 to 67. The vote marks a huge trade victory for meat-exporting countries that use ractopamine, such as the U.S. With a global standard set by the U.N., the World Health Organization is now poised to rule against countries with zero tolerance policies.

D.C.-based food safety reporter Helena Bottemiller wrote that such a close vote is rare for the Codex and that the contentious vote on the minimum residue limit had been stalled since 2008.

Consumers International, which represents 220 consumer organizations in 110 countries, has observer status at Codex meetings. CI representative Michael Hansen told Bottlemiller that with this vote, some international organizations worry that the Codex is becoming “another politicized global body, rather than the science-based consensus body it has managed to be so far.”

“In the past, Codex has avoided adopting standards where scientists disagree, or where the scientific data is lacking or insufficient,” Hansen said in a statement to Bottemiller. “We now see a situation where trade concerns are trumping science. This does not bode well for the credibility of Codex standards in the future.”

As for ractopamine residue in American meats, a January 2013 investigation by Consumer Reports found about 20 percent of pork products tested in the United States had traces of ractopamine, but quantities fell well below the FDA approved limit of 50 parts per billion.

Yet ractopamine’s effect on humans has not been well-studied. The drug’s primary human health study, conducted by the World Health Organization on just six healthy men, caused heart pounding in three of the men. One man was withdrawn from the study as a result.

Tomaselli of the Center for Food Safety says that a six-year statute of limitations prevented the lawsuit from targeting more than the 11 drugs listed in the charge, but a successful lawsuit could lead to a domino effect.

“The other [ractopamine-based] drugs will remain on the market [if this lawsuit is successful]. However, this could definitely shed some light as far as the impacts [of ractopamine are] concerned, which would give the FDA cause for concern with some of these other drugs,” Tomaselli says. “The FDA, under the federal Food and Cosmetic Act, is required to take new information on drugs into consideration to see whether or not they should suspend or withdraw other animal drugs. So if it did come to light that the 11 drugs in this lawsuit were causing impacts to humans or animals or the environment, then the FDA could use that info to withdraw the approvals for the other drugs.”

While ractopamine has not been adequately studied in humans, scientific literature has documented evidence of its effect on animals. Ractopamine has been linked to “downed” animals that are too sick to stand, as well as muscular tremors, broken limbs, cardiovascular dysfunction and increased aggressive behavior in animals. FDA reports obtained by Helena Bottemiller in 2012 show the drug is responsible for more reports of adverse effects in swine than any other animal drug on the market. Between March 2011 and January 2012, 160,000 pigs were reported to have experienced negative health effects after being fed ractopamine.

Temple Grandin, an animal welfare expert and professor of animal science at Colorado State University, says she has personally seen the negative effects ractopamine has on hogs and cattle.

“Back in August 2006, [three years after] ractopamine came on the market [for use with cattle], cattle started showing up in the meat packing plants that were stiff, sore and lame and showing heat stress symptoms like extended tongue,” Grandin says. “Hot weather seems to make it worse. And things all came to a head when ractopamine was introduced.

“I have seen cattle that were definitely sore, didn’t want to walk, wouldn’t get up. And they act like the floor’s red hot,” Grandin adds. “They’ll stand in the pen and shift back and forth, one foot to another. Coming down a truck ramp they’ll act like the ramp’s redhot —They don’t want to put their feet down. They’ll tip toe down the ramp in a really odd way because their feet are hurting.”

Grandin explains that in some very extreme instances cattle lost feet due to overdoses of the drug. She says that in addition to the drug creating health issues for animals, it degrades the quality of the meat by toughening it.

The Humane Society of the United States and the United Farm Workers filed the second lawsuit against the FDA. In a press release about the lawsuit, the nonprofit organizations cite concerns with the fact that ractopamine-based drugs remain active in animal waste.

“The dispute over ractopamine speaks to a broader illness in the nation’s pork industry,” Wayne Pacelle, president and CEO of The Humane Society of the United States, wrote in an op-ed piece for LiveScience in July. “The pork industry insists on using a dangerous drug and then complains when other nations and American consumers don’t want their pork. They have some sort of expectation that they know best, behaving like parents insisting that their unknowing children eat whatever is on their plate.”