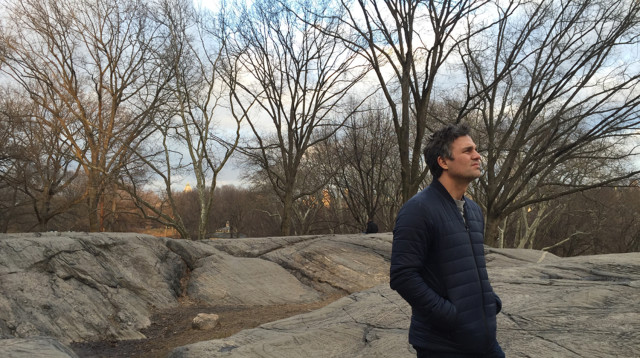 In late 2012, Governor Andrew Cuomo announced he was considering opening New York to fracking, allowing the oil and gas industry to develop the state’s portion of the Marcellus Shale. But local activists, nonprofits, concerned citizens and people like filmmaker Jon Bowermaster and actor/activist Mark Ruffalo banded together in protest. And what began as a fight for their own state turned into a national movement for a full transition to renewables and away from the burning of fossil fuels.

“Solutions to our energy quandary are available today,” Ruffalo says while narrating the new film, Dear President Obama: The Clean Energy Revolution is Now. “…This could be our last moment to act to save much of what we hold most precious and to pass on a planet worthy of our children.”

Directed by Bowermaster and produced by Ruffalo, Dear President Obama presents a sweeping look at the impact oil and gas development has on local communities across the country, from inner city Los Angeles to rural West Virginia. Beginning in late 2013, Bowermaster and his crew from Oceans 8 Films traveled to 20 states and conducted more than 130 interviews.

“I think what makes this film different from any other that’s talked about the subject is that you recognize in a pretty short period, 10 years, [fracking has] impacted every socioeconomic class, from poor to middle class to even the wealthy,” Bowermaster says. “You see it in urban areas, you see it in suburbs including suburban areas outside of Denver, and you see it in remote corners of rural states. It’s everywhere, everywhere.”

Furthermore, Dear President Obama makes a direct plea to elected officials to protect their citizens, abandon the false economic promises of fracking and switch to renewable energy sources at the governmental level.

Like expanding the railroads in the 19th century and developing the Internet in the 20th, the transition to renewables requires government support. The film asks policy makers and elected representatives to focus resources on developing renewable energy technologies as a means to making America truly energy independent.

Bowermaster identifies more as a journalist than an activist himself, although he acknowledges some may see him in that vein. “This film and a couple others have definitely crossed a line into advocacy journalism,” he says. “I feel like I’ve been reporting on environmental issues for long enough that I have the knowledge necessary to tell stories that have a point of view.”

Over his 35-year career, Bowermaster has worked as a journalist for National Geographic, written a dozen books and created 20 documentary films. As a six-time grantee of the National Geographic Expeditions Council, the majority of his career has focused on ocean conservation.

But over the last 18 months, Bowermaster’s Oceans 8 Films has finished six documentaries about the environmental challenges that come with energy extraction, including After the Spill, which tracks the environmental, economic and social tragedy of the Deep Horizon explosion and oil release in the Gulf of Mexico in 2010.

As a resident of New York’s Hudson Valley, Bowermaster became involved in the anti-fracking movement when his home and community were threatened by Cuomo’s impending decision.

“[Fracking] was happening across the border in Pennsylvania,” Bowermaster says. “That’s what got New Yorkers to pay attention. We started hearing about water contamination and the industrialization of small towns and fights between people whose land was being leased and whose land wasn’t being leased, and we thought we don’t want that in our backyard.”

As Bowermaster, Ruffalo and many others began their campaign against fracking, the director released Dear Governor Cuomo, documenting a protest concert on the steps of the state capital in Albany, and the short film eventually made its way to the governor himself.  Due to the large public outcry and the advise from his health and environmental departments, Cuomo officially banned fracking in New York in December 2014, making it the only state with significant shale reserves to do so.

“It became a really incredible example of grassroots political action working,” Bowermaster says, “which we’re not really used to in this country. We’re used to protest, protest, protest and then things continue along as they always have.”

Now with Dear President Obama, Bowermaster makes the same plea to elected officials across the country, including the president himself.

Although Obama has yet to see the film, Bowermaster sent digital copies to the heads of the Environmental Protection Agency, the Department of Energy and the Department of the Interior, with plans to hand it to someone in the executive office as well.

“I can’t imagine Barack Obama and Michelle Obama and their two kids sitting down and watching this film and afterwards going, ‘You know that fracking, it’s really great. We need to do more of that,’” Bowermaster says. “So much of it is common sense when you see it all laid out.”

The director insists the film isn’t intended to point the finger, but rather should be viewed as an invitation to side with scientists and concerned citizens who want to see a shift toward renewable energy.

“Obviously, [the film] is nominally aimed at President Obama because we think there are a few things he could do as he continues to burnish his environmental legacy,” Bowermaster says. “But the story is aimed at every elected official from county commissioner to congressperson to whoever the next president is.”

Bowermaster believes the success of New York’s grassroots activism can serve as a model throughout the country, although he does recognize that places such as Colorado and California are battling a long history of drilling and exploration unknown in the Northeast. Still, he maintains his position that the industry will always produce a boom and bust economy, never serving anyone well. Although the industry and its government lobbyists argue that fracking will produce jobs and be good for the economy and the environment, “Those things are proving just not to be true,” Bowermaster says.

And he shows this through his film, with images and interviews of water contamination in California, the boom and bust in North Dakota and the earthquakes in Arkansas, all a

result of the fracking industry.

In Colorado, residents of Longmont talk about their frustrations as oil and gas development has moved in and Rep. Jared Polis and Gov. John Hickenlooper have refused to listen to their concerns. It shows the plethora of wells and storage facilities in Weld County built close to homes, schools and medical facilities. And it shows infrared images of a well leaking methane right next to a playground.

“There’s nothing natural about natural gas,” Bowermaster says. “Most of natural gas is methane, which is highly toxic. But [the industry] did a really good job of selling it to the politicians, to the public and initially to environmentalists. There were lots of green thinkers who bought on to the natural gas as the bridge to the future. As the film does a pretty good job of showing, that bridge was pretty much a dead end.”

In demanding a clean energy revolution, the film intends to reclaim the term “clean energy” from the fossil fuel industry who used it to market natural gas as an alternative to coal. Clean energy is renewable energy, Bowermaster says, and the subtitle echoes Ruffalo’s campaign of the same name.

“Mark is a huge part of this because he is such a committed believer,” Bowermaster says. “He’s not just some drop by celebrity who just lends his name to something to burnish his own green reputation. He lives and breathes this stuff.”

In 2011, Ruffalo launched The Solutions Project nonprofit with several experts also featured in Dear President Obama including the Director of the Atmosphere and Energy Program at Stanford University, Marc Jacobson, and Gasland director Josh Fox. The group works within all 50 states creating a pathway to 100 percent renewable energy use by the year 2050. Bowermaster says the group has several events planned this year, including a presentation at the Democratic National Convention in July.

“We should be investing in nothing but renewables going forward,” Bowermaster says. “That said, I’m not naïve. I understand that we as citizens have to sacrifice in order to make that happen. We have to drive smaller cars. We have to live in smaller houses. We have to use less energy. We are the ones demanding the energy.”

But by interacting with scientists working on solar and wind technology through the making of this film, Bowermaster believes a truly clean energy future is possible.

“It’s allowing me to see past the short-term mentality of most executives working in the fossil fuel industry,” he says. “The possibilities of renewables are so mind-blowing it makes those still insisting that burning things is our only energy future seem like cavemen.”

The filmmaker is currently on tour with the film, visiting 40 different cities including Boulder at eTown Hall on April 19 and Denver April 23. He also has plans to release the film on Netflix, Amazon and iTunes as soon as possible, making it available to anyone and everyone. Hopefully that includes all candidates running for elected office this year.