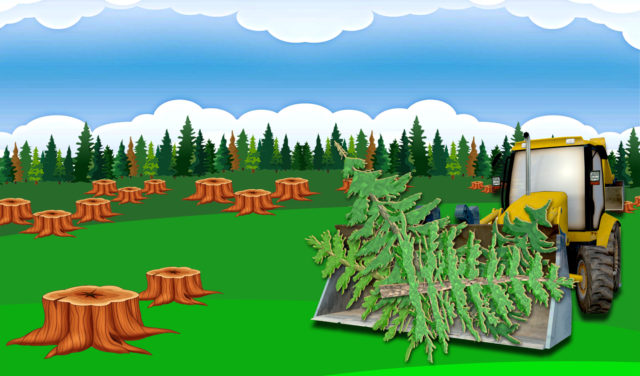 Conservationists are challenging a logging proposal that would clear-cut 1,300 acres in the White River National Forest northeast of Aspen, including endangered Canada lynx habitat and units adjacent to the protected Woods Lake Roadless Area.

The Upper Fryingpan Vegetation Management Project covers 1,848 acres in the Aspen/Sopris Ranger District in Eagle and Pitkin Counties, Colorado, with the goal of providing lumber and biomass energy, increasing the diversity of tree age and size, and creating snowshoe hare (Lepus americanus) habitat, the primary food source of the Canada lynx (Lynx canadensis).

However, a formal objection filed by Denver-based forest management analyst and consultant Rocky Smith, along with representatives from Rocky Mountain Wild, Rocky Mountain Recreation Initiative and a chapter of Great Old Broads for Wilderness, alleges the project would instead degrade habitat for lynx and other wildlife, disturb soils and watersheds, and impact scenery. Objectors say the U.S. Forest Service must draft an Environmental Impact Statement (EIS) to detail the project’s potential harm to ecosystems and offer alternatives that would shrink its footprint.

“We think that the impacts are of a nature that are significant [and therefore require] an EIS,” says Smith, who has 35 years of experience related to national forest regulations, in an interview with Boulder Weekly.

The Fryingpan landscape consists of mostly lodgepole pine, aspen and spruce/fir stands with much of the forest dating back to a large wildfire in 1860, according to the Aspen/Sopris Ranger District’s Notice of Proposed Action for the project.

The lion’s share of operations involves 1,061 acres of clear-cuts where all merchantable lodgepole over five inches in diameter would be logged — roughly 350,000 to 400,000 trees, according to a March 2017 Upper Fryingpan Vegetation Specialist Report — while leaving behind some spruce, fir and aspen under five inches.

The project calls for another 327 acres of aspen clear-cuts — coppice cutting — which removes all trees in a unit, with an additional 458 acres of “group selection,” where stands would be cleared up to an acre in size, with total openings not to exceed 25 to 30 percent of a unit. The Forest Service would also punch in 10 miles of temporary roads for logging trucks, which they would obliterate afterwards.

Kate Jerman, public affairs officer for the White River National Forest, explained in an email that much of the thrust behind the logging is to “alter the structure of the stand in a way that will increase the overall resiliency of the area to future disturbance such as insects, disease and wildfire.”

While enhancing variety of tree age is one of the project’s objectives, not everyone agrees with the agency’s methods.

“Long before humans were clear-cutting, the forest maintained natural age class diversity all on its own,” says Delia Malone, wildlife chair of the Colorado Chapter of the Sierra Club.

Malone says the Forest Service’s practice of clear-cutting to increase age class diversity — instead of allowing the forest to do so on its own over time — degrades wildlife habitat.

“If you let that lodgepole forest get to maturity without the cutting, it would be replaced … by older growth forest, which would provide long-term habitat for snowshoe hare,” Malone says. “So they kind of create this self-fulfilling prophecy of the need to cut by their very activities.”

Smith points out that some of the units of the project already include aspen stands with a diverse age class, maintaining that the agency’s mandate to cut “doesn’t make sense.”

Another Forest Service project goal is to create habitat for the snowshoe hare, the endangered Canada lynx’s favorite food.

While the elusive wildcat is currently protected under the Endangered Species Act (ESA), in January the U.S. Fish and Wildlife Service (USFWS) released a scientific review of the Canada lynx in the contiguous U.S., concluding the species “may no longer warrant protection” under the ESA.

Despite admitting the possibility of the creatures being “functionally extirpated” from some of their main population centers during this century, USFWS will nevertheless “begin development of a proposed rule to delist the species.”

Scoping comments on the project filed in December 2016 by Smith, conservation groups and 40 area residents noted that some of the units are good lynx habitat with “overhead cover and sufficient horizontal cover near the ground.” Clear-cutting, however, would remove trees that might otherwise fall and provide denning habitat.

Further, Smith explains that large openings — the largest unit is 113 acres and some adjacent units add up to 180 acres — make the forest “unsuitable” for lynx. Reducing canopy cover between areas of high-quality habitat, such as the adjacent 12,200-acre Woods Lake Roadless area, makes the cats vulnerable to predation from eagles and hawks.

“They need connectivity, and this will disrupt that,” says Smith.

Malone says the project will “absolutely increase fragmentation of the landscape and … in the face of a changing climate, critters need to move, and this will inhibit that ability to move from secure habitat to other secure habitat.”

As a multi-use project, the Forest Service is also looking to generate revenue from the project through the sale of wood to local businesses for the production of lumber and biomass electricity. The project is expected to generate between 18 and 22 million board feet of lumber, according to the Specialist Report.

Mike Kusar, general manager for Montrose Forest Products — a local mill likely to bid on the wood — says national forest timber sales like Upper Fryingpan help keep the region’s timber industry afloat. He added that Montrose provides almost 100 direct jobs at the mill while contracting with another 200 truckers and other workers.

“That one sale obviously isn’t going to make or break us,” Kusar says. “But they’re all important to us.”

Due to the small size of the trees, Smith questions how many logs could actually be turned into dimensional lumber.

Trees that are too small, crooked, knotty, or rotten for lumber or poles, as well as any by-products of logging not scattered or burned on-site, can be chipped and trucked to the Eagle Valley Clean Energy facility, an 11.5-megawatt biomass power facility in Gypsum in Eagle County.

“They can use just about anything that grows in the ground and make biomass,” says Smith.

“We can comfortably assume, based on current markets, that most of the aspen and small-diameter lodgepole would go [to the] Gypsum biomass facility,” says Jerman, the White River public affairs officer.

Woody biomass energy is a controversy in and of itself, with supporters calling it clean, renewable, “carbon neutral” energy and critics countering that cutting and burning trees degrades forests while emitting carbon dioxide and harmful air pollutants.

For years, the U.S. Environmental Protection Agency (EPA) has delayed the decision for how to account for carbon emissions from biomass energy. Last month, EPA administrator Scott Pruitt sent a letter to New Hampshire Governor Chris Sununu suggesting that biomass energy may be carbon neutral, which some environmentalists say ignores climate science and forest ecology.

“When we remove material from the forest, we are removing the very nutrients that sustain that forest,” says Malone. “Forest nutrients are recycled within that forest into new trees and new life, so basically by removing those products, we’re diminishing the health of the forest.”

“There’s this concept that humans need to manage the landscape, [which] is why we’re in the predicament that we’re in in the first place,” says Malone. “When we start mucking around with natural processes, we generally create more disturbance and more loss of biological diversity than we intend.”

The Forest Service had until March to review and analyze the eleven objections the Upper Fryingpan Vegetation Management Project received.

At some point following the review, the team will make recommendations to Scott Fitzwilliams, forest supervisor for the White River National Forest, who will decide whether to move the project along as is, amend it, or cancel it altogether.