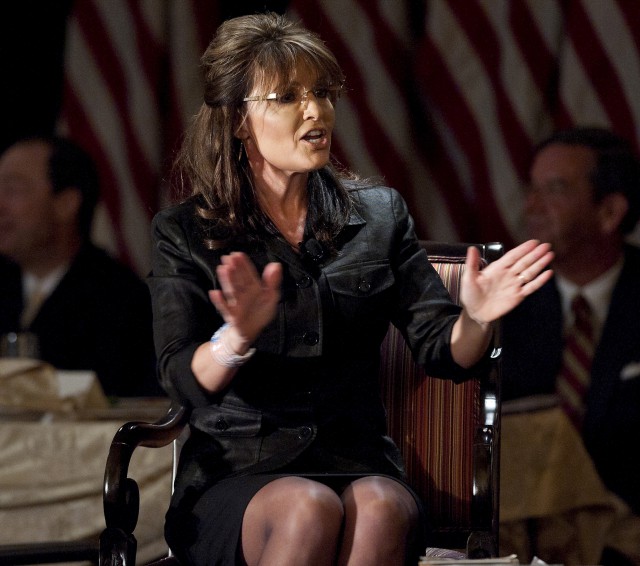 — In a poised and lively appearance before business executives in on Thursday, remained coy about whether she will run for president next year.

Asked directly if she would be a candidate, the 2008
Republican vice presidential nominee said, “I am still thinking about
it. Certainly haven’t made up my mind, couldn’t make a decision yet.”

Minutes later, however, Palin said voters were
seeking “unconventional” candidates who will “shake up” government. Her
ideal candidate, she said, is a mother with experience in both politics
and business, such as herself.

Palin, accompanied by her daughter Bristol, answered questions from ,
president of the Long Island Association, for 70 minutes before a crowd
of about 1,000 at the Crest Hollow Country Club. Palin was paid for her
appearance, but the LIA declined to say how much.

The former
governor was animated and at times made fun of herself, referring to
her love of moose hunting and the time she wrote notes on her hand for
a speech.

The LIA is a far cry from the conservative and tea
party groups Palin usually addresses. Her rhetoric Thursday was less
strident, though she made her positions clear on the federal budget,
gun control, foreign policy and other issues.

Still, she saved her strongest criticism for President budget proposal unveiled Monday. She said it does little to reduce the estimated national debt and undermines job growth by increasing taxes.

“This very poor and shortsighted budget proposal of
our president … he’s certainly on the wrong track,” Palin said. “We
have to get to a more common-sense ground and apply those principles
that have worked in the past.”

She did not cite specific remedies despite being pressed by Law on several occasions.

Asked why her poll numbers are low, Palin blamed
news reports about some of her offhand remarks, but also acknowledged
the need to reach out beyond conservative circles. “In a lot of those
polls, yeah, I get my butt kicked,” she said. “I don’t do well in a lot
of these polls.”

Citing the high cost of food in the past two years, Palin said, “No wonder is telling everybody, ‘You better breast-feed your babies’ — because
I’m looking and going, ‘Yeah, you better because the price of milk is
so high right now.'”

The White House didn’t immediately respond to a request for comment Thursday night.

Palin’s approach seemed to go over well with the audience, earning her warm applause.

“She was lighthearted and folksy. … People can identify with that,” said Executive .

, president of the architecture and engineering firm in , said, “She’s a real person. … I think today she refuted the snobs that are always making fun of her.”

Accountant agreed, saying, “She really had them listening to what she was saying. I think a lot of people saw her in a different light.”