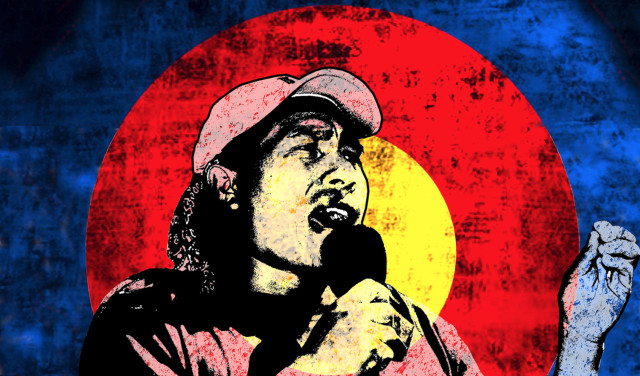 When I first meet Juan de Dios García, he’s laughing. His dark eyes twinkle as his dimples indent and his smile broadens. But there is something else behind his eyes that belie his smile.

Our conversation quickly takes a serious turn. As we sit down across from one another with a translator, he leans in, resting his forearms on his knees and clasping his hands together. He looks me directly in the eye as he speaks, even though he knows I can’t understand his language. He describes the tragic events that brought him here — the situation that drove him to flee his home country of Guatemala with his wife and three children. It’s a hard story that includes everything from village massacres to having his own life threatened.

“In Guatemala, there has been a systematic violation of the rights, principally of indigenous peoples, who struggle to defend nature and natural resources,” Juan says. “This policy of expropriation and the economic interests of governments and investors, both national and international, have always found a way to abuse or take advantage of these resources.”

Juan is the executive director of the Association for the Integral Development of the Victims of Violence in the Verapaces, Maya Achí (ADIVIMA), a nonprofit human rights and development organization in Guatemala. The organization was founded in 1994 by survivors of the Chixoy massacres in Rabinal, a region long populated by the Maya Achí people. Juan, from Rabinal himself, became the executive director of ADIVIMA in 1999.

Beginning in 1980, funding from the World Bank, Inter-American Development Bank and a few other investment banks helped build the the Chixoy hydroelectric dam, roughly 200 kilometers north of Guatemala City. But the dam required the flooding of Maya Achí communities in the valley and some of the indigenous people refused to leave their homes, their land and their livelihoods; others tried to return after finding poor resettlement conditions. They were met by Guatemalan military and paramilitaries who killed 444 people in the village of Rio Negro alone.

“Paramilitaries were allied with the government and really the force of the destruction came on orders from the president,” Juan says. “And the military collaborated with the paramilitary who carried out the actions.”

ADIVIMA estimates that between 1980 and ’84, 4,000 people were murdered by paramilitaries. “Those deaths resulted in a loss of 20 percent of the population, left thousands of widows and unprotected orphans without resources to survive, and tore the social fabric of the community,” ADIVIMA’s website states.

In the end, over 30 Mayan villages were destroyed and thousands of people were relocated away from the river. Although Juan didn’t lose any family or land at the time, he later met his wife who is the only survivor of her family.

And Juan’s father was always deeply involved in the community, helping to build schools and promoting public health initiatives in the midst of Guatemala’s civil war. He was even tortured by the military for his social work, Juan says, to the point that he changed the family name for protection.

“We had to change our name, our identity, just to survive. My real name is not Juan de Dios García,” he says. “This idea of looking for justice, that also is very personal because my father is a survivor. … From the time I was young, I was really interested in supporting the community.”

Drawing inspiration from his father, he worked with an organization that supports women and children suffering psychological and physical violence before joining ADIVIMA. “When they asked me to come and work with ADIVIMA and the objective was to seek justice, that is something that I can really identify with,” he says. “We really felt that we needed to look for justice and hold those who were responsible for the massacres accountable.”

Juan and ADIVIMA have worked tirelessly for their cause, seeking justice both in the form of reparations for survivors of the massacres and through the criminal justice system.

“We always felt that the two things went hand-in-hand,” Juan says. “You have a negative feeling if you get reparations but then the people who had caused the massacres, who violated your rights, are still walking around in the streets.

“… And these two types of justice have their own particularities. The criminal justice, that’s something that you can’t negotiate. You don’t sit down at a table and dialogue. You need judges there, it’s a question of people’s lives and there are clear laws and court systems to resolve that,” he says. “For the other things, for the economic, cultural and environmental aspects, this is really all a question of meeting with the actors and discussing with them how they are going to fulfill their responsibilities to provide these things.”

First, ADIVIMA focused its efforts on prosecuting the paramilitaries in court. In a decade, they have seen nine paramilitaries sentenced for the massacres. In these cases, the organization advocated for prison sentences rather than the death penalty, adhering to their belief in the sanctity of life, Juan says.

“Even after there was some justice and some of the people responsible were put in jail, still the [surviving] families and the people remaining were in extreme poverty,” he continues. “And what good is having people in jail if people, as a result of [their actions], people are still very poor? And that’s when we decided we needed to look for justice in the form of reparations.”

In 2004, Juan and ADIVIMA began advising the local communities in seeking reparations. Through intensive negotiations with government officials and with international observers such as Organization of American States, a deal was reached in 2010 that promised $154.5 million in reparations to the survivors of the massacres. However, as years went by and the government didn’t comply, Juan didn’t back down and began looking for international allies. In 2012, he traveled to Washington D.C. and met with members of the U.S. Senate. Because of these conversations, the 2014 Senate foreign appropriations bill contained language essentially forcing the Guatemalan government to make good on its reparation promises.

The bill cut off U.S. funding to the Central American country, specifically for its military. It also withheld U.S.’ contribution to both the World Bank and the Inter-American Development Bank until the Guatemalan government began making payments to the survivors of the massacres. The first check was finally delivered in October 2015.

But the bill affects more than just Guatemala. “This U.S. legislation puts pressure on all multilateral banks,” Juan says. “The African Development Bank, the Asian Development Bank … and it has conditions on U.S. money going to them that says they can’t invest in natural resource exploitation without consulting with communities.”

Juan says the current model that relies on development banks and business investors to develop natural resources without consulting local communities is dangerous. Not only could it result in further atrocities such as the Chixoy massacre, but also it fails to develop the community at all. In Rabinal, for example, the companies building the Chixoy dam didn’t hire any locals for the construction or maintenance of the project. Instead they were relocated and have been living in poverty every since. There are reports of families living on one meal a day, lacking access to basic medical care and schools. Plus, “Now 30 years later, the communities finally got electricity despite the fact that their lands were generating electricity for others,” Juan says. “There was a complete destruction of the community’s social fabric. And so this is really a model that has been demonstrated to be ineffective.”

Juan and ADIVIMA continue to bring their story to Washington trying to make sure the critical language affecting Guatemala’s reparation plan remains in the each year’s foreign appropriations bill. But this only partially explains why Juan uprooted his family and moved to the U.S.

“It’s a very complicated situation in Guatemala. All of the activists, all of the defenders of  human rights of the environment have basically become enemies of the state,” Juan says. “And it’s not just in Guatemala, it’s throughout the region. Activists, anyone defending the environment, defending human rights are facing prison, assassination, persecution, and this has hurt us tremendously.”

Here Juan takes a long pause as he bows his head and becomes emotional. It is March 3, the day his friend and fellow environmental activist Berta Cáceres, who worked tirelessly against an internationally-financed hydroelectric dam project, was assassinated in neighboring Honduras. (See sidebar)

“I’m here for that same reason, I had to escape that,” he says. “I have to think every day about all the people who are back there who are in danger, and it really hurts.”

With the news of Berta’s death still fresh, Juan lists off other activists he’s worried about in Central America. “I wish I could be invisible and go there and protect them,” he says.

I watch as Juan’s demeanor changes again, this time from a moment of overwhelming grief to indignation.

His voice begins to crack and the conversation pauses again, as we all — Juan, the translator and I — struggle to maintain composure. Eventually, I ask Juan about the threats he experienced in Guatemala.

“Throughout my work on this, I’ve been subject to threats,” Juan says. “But it was after the reparations law and policies that things became more serious.”

In 2013, Juan found explosives hidden in his car and his children’s school reported suspicious people monitoring his two daughters and his son. There were also people stationed at the entrance to his community who would harass him anytime he left his house. Furthermore, Juan claims even the Guatemalan president himself publicly threatened him on national T.V. through an attempt to discredit his work by saying he wasn’t Mayan but actually Cuban.

Soon after these threats, Juan moved his family to Colorado, where he currently resides. Although he often considers returning home, his fellow activists in Guatemala tell him it’s still too dangerous, that actually things are just getting worse.

“But as I’ve always said, any obstacle can turn into an opportunity,” Juan says. “So being here has allowed me to travel to Washington all the time and work more there.”

Also, with the help of technology, he continues to work with ADIVIMA. And he is a long-distance interpreter for four different Mayan languages with an organization supporting unaccompanied children in immigration courts.

Although he can’t go home, Juan is committed to seeing the reparations paid to the Maya Achí people in full. The next payment is expected in April, with complete payment promised in 15 years. But Juan says the struggle, and his fight for justice, will continue his whole life.

“The essential things are the natural resources. They are our mother and they are our God. The other thing is this issue of access, especially access to justice. Indigenous people have been excluded, marginalized, from decisions,” Juan says. “It’s a huge challenge but we hope to see at some point this change in inequality. … It’s a result of the hatred people have towards indigenous peoples, and we hope that we can reverse that and begin to leave in peace and harmony.”