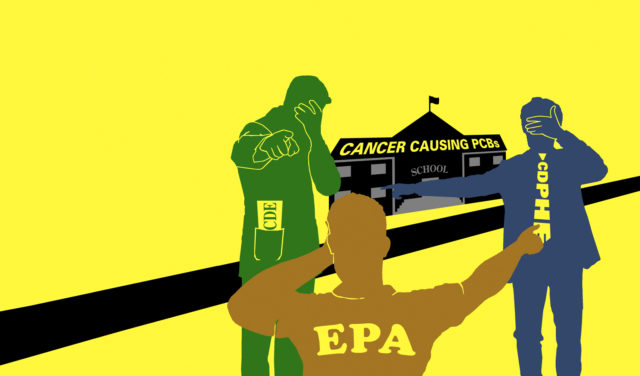 At least one-third of Colorado public schools may contain harmful polychlorinated biphenyls or PCBs. Experts familiar with the issue, including researchers at Harvard who have published two studies including one in 2016 titled “Review of PCBs in U.S. Schools: a brief history, an estimate of the number of impacted schools, and an approach for evaluating indoor air samples” and a SUNY Albany professor who focuses on the health impacts of long term PCB exposure, believe that the probability that hundreds of schools in Colorado are currently contaminated with PCBs is absolute.

“The chances that some Colorado schools have PCBs is 100 percent,” says Dr. David Carpenter, director of the Institute for Health and the Environment at SUNY Albany.

Carpenter has led several studies that focus on populations exposed to PCBs. His research has found that rural and inner city school districts are more likely to have higher concentrations of leftover PCBs in the caulking and masonry, and that, like lead or asbestos, PCBs are carcinogenic and hazardous if inhaled.

“Of course some have been remediated and upgraded such that concentrations may be low now, but I’m sure that is not the case for all of them,” Carpenter says.

He’s also testifying pro-bono on behalf of parents and teachers in a high-profile citizen’s court case against Santa Monica-Malibu Unified School District (SMMUSD) in California. In the fall of 2013, three teachers developed thyroid cancer within months of one another all while working in classrooms with unsafe levels of toxic PCBs in the window caulking.

Soon after the teachers were found to have cancer, it was learned that the school district had known that its buildings and soil contained an “unacceptable risk.” Then, when the school tested the window caulkings, it found as much as 11,000 times the Environmental Protection Agency’s (EPA) legal limit of PCBs. Critics of SMMUSD’s handling of the matter are now accusing it of attempting to bury the evidence.

In May 2016, nearly 6 years after Malibu first learned it had a contamination problem, a federal judge took up the citizen’s lawsuit against the School District.

What occurred in the Malibu school district demonstrates that no school system, regardless of its affluence or funding, is above the potential for PCB exposure. It also speaks to the crippling cost of remediation that a wealthy system such as SMMUSD would be willing to go to such lengths and expense just to avoid cleanup.

“In many cases the PCBs migrated from the caulk into the adjacent masonry, making remediation even more expensive,” Carpenter says. “So it isn’t just a matter of removing and replacing windows and caulk.”

The total cost of remediation and legal fees in the Malibu case could top $9.5 million and that does not include any potential settlements of lawsuits pertaining to illness among students and teachers. Carpenter says that the high cost of remediation is the reason most districts avoid testing school buildings for PCBs altogether.

While the testing is relatively inexpensive — usually between $50 and $300 according to Carpenter — remediation is not. Carpenter says it’s difficult to guess how much remediation is likely to cost until a thorough examination of a school in question has been conducted.

He also points out that the current regulations do not require any action even if you think PCBs are present in a school but don’t test for them. For that reason he says many schools and even states don’t test simply because they don’t want to deal with the expense of fixing the problem should PCBs be found.

Even when testing occurs, the legal requirements can make for less than thorough results. The EPA is only legally required to test one room suspected of containing PCBs. If PCBs above the allowable limits are found in one room, the EPA is required to remove the contamination from that room only. The agency then has no further obligation to even test the remaining rooms in the building, let alone the other school buildings within the district. Critic’s argue this selective test and cleanup procedure is a glaring loophole in the system designed to save money, not necessarily protect children and teachers.

Since “administrators and facility managers are [the ones] most familiar with the materials and equipment used in their buildings, the EPA relies on schools to evaluate and determine potential risks,” says Richard Mylott, a spokesperson with the EPA.

Until 1979, PCBs were legal to use as sealants for window caulking and ballasts in fluorescent lights. Then Congress banned the manufacturing and use of PCBs under the Toxic Substances Control Act (TSCA). By that point, PCBs were slowly being phased out. The TSCA contains the laws governing the legal limits of PCBs allowed in public buildings. Responsibility for enforcing the TSCA falls to the EPA in theory, but as with many environmental regulations, it’s not that simple.

But no matter the arguments over who is in charge of regulating PCBs, it is imperative that the squabbling is settled quickly because as the recent Harvard study mentioned above asserts, up to one-third of the nation’s schools, constructed between 1950 and 1980, may contain PCBs. That’s between 12,960 to 25,920 schools nationally.

That’s why PCB exposure poses such a threat to Colorado public schools. More than 900 public schools in the state were built before the EPA determined these toxic chemicals to be human carcinogens. Many of these buildings are still in use today, which means, based on Carpenter’s and the Harvard researcher’s estimates, some 300 Colorado schools are likely to be currently exposing their occupants to PCBs at some level.

So what has the EPA found in Colorado schools so far? The answer is nothing, but that’s because the EPA says it isn’t required to test for PCBs until it’s asked to do so and no one has requested a test. The agency did confirm that the Boulder Valley School District (BVSD) is the only school that has been proactive on the PCB front by requesting the EPA’s assistance. But that assistance was only a request for updated regulatory information so the district could conduct its own PCB audit via an outside consultant.

While the BVSD did find PCBs in some buildings, Briggs Gamblin, director of communication and legislative policy for BVSD, says the district believes the PCBs are now “contained.” Boulder Weekly will be following up on exactly what was found and what steps to remediate the problem were taken in BVSD. But more importantly,  BVSD’s experience only confirms that Colorado has a statewide issue in its public schools.

“Any exposure is going to increase risk of disease, and the greater the exposure the greater the risk,” Carpenter says. “This is especially important for children in schools, where they should not be exposed to a substance, that like lead, reduces learning ability.”

Long-term exposure to PCBs has been linked to cancer, endocrine disorders and reproductive troubles. Carpenter says the compounds have also been linked to cognitive and behavioral problems in children including impaired reflexes, lower IQs and higher rates of ADHD.

The Colorado Department of Education (CDE) has not researched PCBs in public schools across the state over which it has jurisdiction. It claims that its failure to do so is based on the fact that it has not received any legislative directive to investigate PCB exposure to its students. The CDE also says they are not responsible for conducting a PCB investigation and have no intention of doing so.

“Yes, of course CDE is concerned about the health and safety of students in public schools in Colorado,” Jeremy Meyer, CDE assistant director of communications, says. But he then notes that the CDE depends on the Colorado Department of Public Health and Environment (CDPHE) to conduct such tests at public school facilities. If that’s true, it’s news to the CDPHE.

“The state of Colorado is not authorized to implement the regulations pertaining to the management and disposal of materials containing polychlorinated biphenyls (PCBs),” says Freddy Arck, public information specialist with the CDPHE. He says it’s instead the EPA Region 8 that oversees PCB regulations in Colorado.

But the EPA maintains it is not required to test Colorado schools for PCBs because no one has asked them to do so. A seemingly large loophole in the system, given that TSCA regulations do not specifically require PCB testing for public buildings.

Rather, they wait for school districts to contact them with concerns about PCB exposure and then, as mentioned before, test one room. Mylott says the EPA recommends schools take action to reduce potential exposures with the role of the EPA being to provide technical assistance if requested.

It is not a recommendation that the CDE seems interested in hearing. Meyer says the CDE has no intention of researching PCB threats to reduce potential exposure because it has not received any complaints, questions or concerns regarding PCBs. Like many other school districts across the country, Colorado districts are already facing budget cuts. So, according to Carpenter, they know that looking for harmful PCBs will only exacerbate their budget problems.

As for the CDE’s decision to wait for complaints before testing, it could be years, even decades, after exposure before cancer symptoms or other problems surface and are diagnosed. And often by that time, it is impossible for the medical community to trace the exact cause of the illness, particularly if there is no record of PCB exposure because no one ever bothered to test for the carcinogens and report their presence in schools.

“Colorado is a local control state, and we cannot mandate them to fix an item like this,” Kevin Huber, a regional program manager for CDE, says. “This would have to be resolved at the district level.”

And the blame shifting goes on and on.

It seems when it comes to PCBs and Colorado schools, it’s just one big circle of denied responsibility. And yet, all the while, if the Harvard study and the experts who have researched the issue more closely are correct, Colorado children and teachers in as many as 300 of our schools are potentially being exposed to carcinogenic PCBs every day. And, every hour that the state and federal government delays its investigation, the price tag for cleanup only goes up, not to mention the potential health impacts.

Carpenter points out that all of this lack of taking responsibility on the part of bureaucracies that are supposedly in place to keep our children safe creates a Catch 22. “[Legally] if you don’t know they’re [PCBs] there, you don’t have to do anything about it,” he says. “But to have it be a dangerous place and have no one know is unethical.”

At this point, it has become clear that those in charge of keeping our children safe from PCB exposure in Colorado have been made aware that it is an issue, or at least the experts and the researchers at Harvard say it’s an issue.

The only question now is who will take responsibility for enforcing our environmental laws and get started with the necessary testing. If Malibu and the other districts are any example, it will likely take parents getting involved to spark the needed actions.