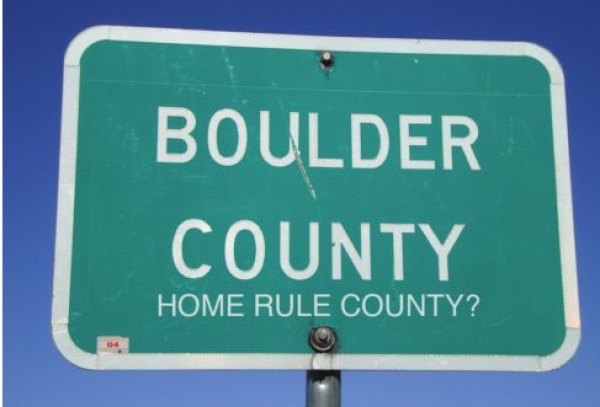 An initiative to create “home rule” in Boulder County, which might allow it to ban fracking, GMO cropping and other ventures currently under state jurisdiction, is under way after the Boulder County Clerk recently approved an initial petition for the case.

The petition would put on the November ballot the question “Shall Boulder County Establish a Home Rule Charter Commission?” This commission would write a self-government and bill of rights charter on which Boulder County residents would then vote in the future. On the same ballot this year would be an election of 21 citizens to write that charter.

In order to get the initial ballot question in front of voters, the petition needs to collect 13,000 petition signatures. The Boulder County Community Rights Network, a citizen organization, filed the petition.

Home rule calls for cities or counties to set up “self-government” instead of the current system of “statutory,” or state, regulation. Cities or counties that enact home rule have, ostensibly, more ability to decide matters of local importance that are currently influenced or governed by state laws — things like water quality, fracking, farming, social issues and more. They do this by amending the approved home rule charter via voterapproved petitions. This is opposed to letting key issues be decided by county commissioners, who home rule proponents say must oblige the state, not the wishes of local communities.

“There have been a number of issues over the last several years where the citizens have had absolutely no authority, legal authority, to decide what happens,” says Mary Smith of the Boulder County Community Rights Network. “There’s been a lot of situations in our county history where the people have spoken loud and clear and the county commissioners have decided against the will of the people. They do not represent us — they represent state interest because we are a statutory county.”

One such issue, Smith says, was a case three years ago in which voters said they didn’t want genetically modified crops planted on Boulder County agricultural land, but the county commissioners voted in favor of it. Home rule would have allowed citizens to vote and decide for themselves if they wanted that land used for GMO agriculture, Smith says.

“How home rule differs from statutory [rule] is that the citizens themselves have the power of initiative. So through a petition process, we can actually get a petition on the ballot and create local law through a democratic process, through the voice of the people,” Smith says. This is contrasted with the current, statutory method where county commissioners have the ability to enact or disallow many ventures.

However, there is some doubt about the legality of a voter-approved home rule charter and, furthermore, if home rule charters will supersede existing state laws or effect any real change at all.

Proponents point to Article II, Sections 1, 2 and 3, of the Colorado Constitution which says — in part — “The people of this state have the sole and exclusive right of governing themselves, as a free, sovereign and independent state; and to alter and abolish their constitution and form of government whenever they may deem it necessary to their safety and happiness, provided, such change be not repugnant to the constitution of the United States.”

Too, Article XIV of the Colorado Constitution outlines the rules for home rule counties and says, “The reg istered electors of each county of the state are hereby vested with the power to adopt a home rule charter.”

With enough signatures, Boulder County will be the first county in Colorado to put a home rule measure spurred by citizens on the ballot. Two Colorado counties — Weld and Pitkin — have home rule charters, but county commissioners enacted those charters.

The path to home rule can be arduous and one such case is currently unfolding in Lafayette, where voters passed a home rule charter amendment for the city in November 2013. The Lafayette City Council passed a resolution ahead of the election urging citizens to vote against it, claiming that, “The proposed charter amendment will only subject the City to expensive litigation, potential financial liability for violation of federal and state constitutional rights and loss of legitimate businesses.” The Council further resolved “Legislation is already in place that adequately protects the city from adverse impacts of oil and gas exploration.”

As foretold, the Colorado Oil and Gas Association (COGA) sued the city, saying that residents don’t have the authority to ban certain activities allowed by the state government. And in response, Lafayette residents filed a lawsuit in June against Colorado, Governor John Hickenlooper and the Colorado Oil and Gas Association, claiming that their right to self-govern trumps state regulations that might allow fracking in the area. Both lawsuits are currently pending.

However, Boulder County Commissioner Cindy Domenico says there is an important distinction to be made about the Lafayette case — that home rule cities have different abilities than home rule counties.

“A home rule charter would not give us further power,” Domenico says, citing legal experts at the commissioner’s office who looked at the case. “We would still have the same set of responsibilities. [It] would not ban fracking.

Domenico says the Lafayette measure specifically banned fracking, whereas a Boulder County charter may not be able to enumerate specific services to ban or allow. Amendments to a home rule charter that is enacted, however, can be voted in by petition. These amendments could ban specific enterprises like fracking, for instance.

“Cities are a different animal already based on where they gain their powers,” Domenico says. “Counties are only granted powers from what the state grants to them. A home rule county typically has more latitude around specific ordinances and that sort of thing. For us, it’s a structural thing versus some of the far-reaching things a home rule city would have. It doesn’t make the kind of difference that it does for a city. That’s a simplistic way of describing it.”

Domenico adds, “There are definitely the abilities for people in some certain situations to bring petitions to us that already exist.”

“Somebody is going to come and say, ‘You can’t do this. It’s against the law,’” says Mazza, who also serves as a Lafayette Councilwoman. “And our answer is ,‘Well, we’re going to change the law because it’s not working for the people who live here. It’s working dandy for the corporations.’”

Mazza says if Boulder County enacts home rule, they can “of course” expect litigation on many individual cases from the state and from corporations moving forward because “people are going to come out of the woodwork and say, ‘No, you can’t do that.’”

Tom Groover, a Boulder chiropractor and Boulder County Community Rights Network member, says the cost  of litigation is something Boulder residents would be willing to shoulder.

“I think the people of Boulder would be willing to pay a dollar a person to fight fracking,” Groover says. He adds that if property values decrease by the conservative estimate of 20 percent due to visible and abundant fracking wells throughout Boulder, the cost of litigation to preserve a new home rule charter would be far less.

In addition to the Boulder County initiative, there is also a statewide measure, Amendment 75, initiated by Mazza’s Colorado Community Rights Network, that would spell out the right for Colorado municipalities to enact home rule and their rights if they do. That petition must garner 86,105 signatures statewide by Aug. 4 to make it onto the November ballot.

And, too, there is Initiative 89, which would allow municipalities to enact environmental laws that are “more restrictive and protective” of the environment than current state laws.

On these issues, Carolyn Tyler of the Colorado Attorney General’s office says, “We are not taking an opinion” and that “If any of them should become law, we of course defend all state laws to the utmost ability of our office.”

Tyler did not specify which, if any, of these amendments would legally supersede existing regulation.

Though home rule legislation and lawsuits are only just beginning nationwide, there are cases that set a precedent for Boulder County. The New York Court of Appeals, for instance, ruled on June 30 that municipalities have the right to ban fracking under home rule.

And on July 7, the Dallas Independent School District’s home rule charter commission met to discuss a ballot initiative that would allow them to govern school issues outside of state regulations.

One other potential obstacle is the economic impact of instituting home rule. Coloradans for Responsible Reform (CFRR), a statewide business group, has expressed opposition to the aforementioned initiatives, saying home rule could damage the local economy.

“These anti-business measures would cripple Colorado’s energy sector, wrecking our economy and killing jobs,” Kelly Brough, CFRR “leadership team” member and CEO of the Denver Metro Chamber of Commerce, said in a statement.

“These wrong-headed measures effectively ban oil and gas development in Colorado and will cripple Colorado’s economy,” CFRR’s Ken Salazar, who served as Secretary of the Interior for President Obama between 2009 and 2013, said in a statement. “Now the balanced development of our natural resources and the quality of life we have worked so hard to achieve is threatened by what will become effective bans on Colorado’s oil and gas industry. We cannot afford to kill Colorado’s economic recovery.”

Coloradans for Responsible Reform has raised more than $750,000 to fight home rule measures in Colorado.

“That’s the same reaction they had about Lafayette: ‘Oh, they’ll bar every business.’ Well that is such a load of bullshit,” Mazza says, “because all these small communities are relying on sales tax.

“What they said about Lafayatte is, ‘Well, it’ll stop gas from going to people’s homes to heat their homes.’ It’s that kind of silly hyperbole, over the top, nonsensical bullshit,” Mazza says. “Small communities who want to be more like hermits and who don’t want any business … they can do that already. Communities can ban business, but they don’t do it because they need the revenues. It’s silly because there’s too much to do with that revenue like treating your water, treating your sewage, caring for your roads.”

Smith says these protests are made in the name of corporate interest without the wellbeing of Colorado citizens in mind.

“We’ve come to a place in this country and specifically in the state of Colorado where they have elevated the rights of money over the rights of life,” Smith says. “Fracking is an industry that violates our water, our air, our soil and the very things we depend on to live. It is exempt from provisions in the Clean Water, the [Safe] Drinking Water and the Clean Air Acts.”

Commissioner Domenico cautions, “I hope people are careful about what they say could come of [home rule] when, legally, the end result may not be what they believe it to be because of the difference in city and county home rule structure.” She adds that she expects Boulder County residents to “read any petition that comes before them and act accordingly.”

For now, Smith says the Boulder County Community Rights Network is soliciting petition signatures to get this initiative onto the ballot. Then, voters can decide for themselves if home rule in Boulder County should be considered.